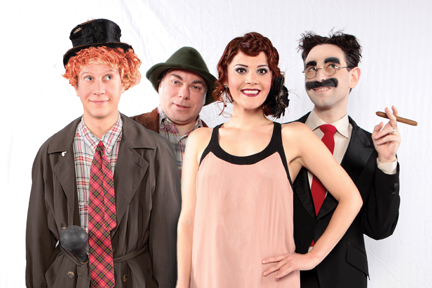 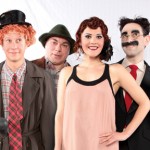 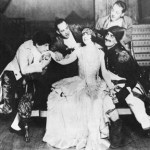 “Ladies and Gentlemen, I’m imagining two factions in this audience. The first is composed of mildly curious people, film buffs, and friends or family of the performers. The second, my brothers and sisters, are those who would put the Marx Brothers before all others, who would abandon a party going on in the next room to watch a Marx Brothers movie.” Thus begins Trav S.D. producer, director, (author, host, performer) and avid Marx aficionado. “It’s the Holy Grail of comedy…a scriptless revue of sketches and songs with the thread of a plotline…Here, then, for the first time in 90 years…”

Representing the brothers’ segue out of vaudeville, I’ll Say She Is opened on Broadway May 1924. Unlike shows that would follow, its format dictated the Marxes (Chico, Harpo, Groucho, and Zeppo) would leave the stage during musical numbers. (Napoleon’s romp is the single exception.)This may be the reason it was never made into a film. Lines and bits were instead “cannibalized” for other ventures. With five years of Herculean research, great patching skills, and genuine affection for both genre and its archaistic purveyors, authors of this production lead by Noah Diamond make it feel authentic.

We open in a theatrical agency at which the brothers successively audition, each with a terrible Al Jolson imitation. (Matthew Curiano- Zeppo, Robert Pinnock- Chico, Seth Shelden-Harpo, and Noah Diamond-Groucho) Distaining their theatrical ambitions but wanting to help, the agent refers them to a newspaper story in which a young, society woman offers hand, heart, and trust fund to the man that gives her the greatest thrill. To say the group is game, is to minimize their patented brand of zany enthusiasm. Arriving at the heiress’s mansion, “the four horsemen of apoplexy” circumnavigate butler and Aunt Ruby (Kathy Biehl), presenting themselves to Beauty (Melody Jane) as the answer to her prayer. “Have you any liquor on your hip?” Chico asks. “No, but I have suppressed desires.” “We’ll drink anything,” he retorts.

The rest of the show involves various loony attempts at getting a rise out of the flapper. Scenarios include: the excitement of Wall Street which apparently included a ballet by risk-addicted fairies; Ruby’s effort to enthrall Beauty with home decorating and that failing, expensive gifts (ouch); and the novelty of acting like she’s poor (a wish granted by fairy godperson Groucho wearing a tiara) in hopes of enjoying simple pleasures.

A hypnotic trance which gives the young woman an opportunity to be Empress Josephine turns into the big production number. (No dancers here) Groucho plays Napoleon, the others her lovers. When “It’s women like you who make men like me like women like you” doesn’t secure the expected laugh, Groucho steps forward with “Kindly submit your complaints in writing!” which does. “The Mayonnaise!” Napoleon exclaims hearing the French National Anthem. “The army must be dressing.”

While smoking at a Chinatown opium den (the original production offered an Apache Dance), Beauty is in proximity of a murder and arrested. “The court will come to order.” “All right, I’ll have a turkey on a rye bread,” mugs Chico. Groucho: “You are going to be convicted of murder.” Beauty: “What makes you so confident?” Groucho: “I’m going to be your lawyer.” Of course she isn’t.

The finale thrill turns out to be love, of course. Musical numbers like “Just a Little Bliss at Sunset” and “I’m Saving You, Dear, For Rainy Weather” add charm. Some are more generic than others, but most are swell. Groucho’s eyebrows should have separate billing for performance skill. Harpo’s horn has exactly the right sound. Chico’s lumpy Italian accent resonates with familiarity. We witness mime of comedy bits that became famous in other vehicles.

The piece is well worth seeing for both factions Trav S.D. recognized. Noah Diamond could push the envelope a bit further with Groucho but manifestation is fun and his deadpan timing excellent. Kathy Biehl has some fine outraged moments in what would become the Margaret Dumont persona of films. Whoever plays the detective stands out as an actor. Other thespians are game but less emphatic and precise at comedy (direction appears sketchy) and less vocally skilled than one would hope. Perhaps the fully staged Fringe Festival production will offer cast changes and really, to see the fairy ballet of Wall Street Blues and Aunt Ruby’s silver service- “It’s stolen!” “No, it’s sterling!” fall from Harpo’s coat is something to which one might look forward.

Original Book & Lyrics by Will. B. Johnstone, Adapted and Expanded by Noah Diamond