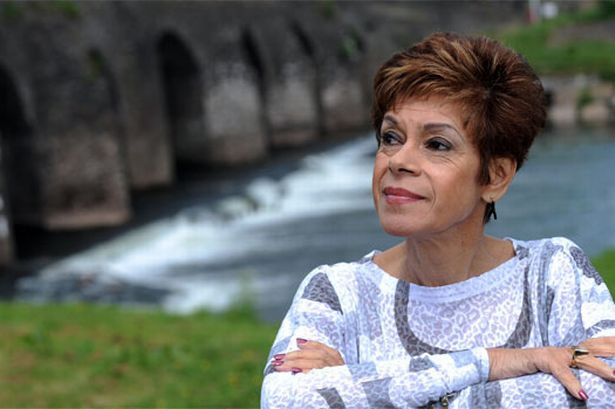 Welsh singer Iris Williams opened her show Let the Music Begin with the title number written by Chris Westlake. It was the perfect way to endear her to the Metropolitan Room audience. Dressed in a sparkly black evening gown, Ms. Williams immediately delivered with her dynamic personality and classically trained contralto voice.

Being a trained classical singer myself, I have always gravitated to singers of that nature. Opera singers who crossed over to cabaret like Eileen Farrell, Kiri te Kaniwa and most recently, Renee Fleming always piqued my interest. I wondered how their “technique” would translate to the American Songbook. How would they place their vowels? How would they not seem so rigid?

Ms. Williams is indeed a classically trained singer; a graduate of the Royal Welsh College of Music. Her success in the United Kingdom is legendary and she has been invited by the Queen to perform fourteen times. She sings quite effortlessly and phrases without breathing in awkward spots. She can shift from comedy to drama with ease.

I have always been impressed with well supported low notes, more so than high notes, and Ms. Williams has that in spades. Her voice is so well supported that I wonder if she even thinks of the technical aspects. Her diction is so precise, I would compare her to the contralto version of Julie Andrews.

Ms. William’s set is truly a masterclass in singing. The night I was there, a whole group of registrants from the NYC Cabaret Convention were in the audience, so I am sure they got an entire lesson to take home with them!

Sometimes certain singing and interpretations can invoke memories. When Ms. Williams sang songs like “October Goes,” by Johnny Mercer/Barry Manilow, to “Children Will Listen” by Stephen Sondheim, it was dreamy. Ms. Williams sings with so much feeling. Even the up-tempo numbers like “The Way You Look Tonight,” by Jerome Kern, and “I’m Checking Out,” by Duke Ellington, had all the appropriate phrasing, but was not stuffy.

Accompanied by an impressive trio, led by Art Weiss on piano, Tom Hubbard on Standup Bass and David Silliman on drums, the whole flow of the set had no monotony. Every song became a musical statement. The dynamic between Ms. Williams and the trio was of humor and genuine affection, which was truly conveyed in the music.

Ms. Williams displayed a great deal of humor and sarcasm. Her anecdotes were just as entertaining as her singing, but she actually did not need to say anything at times. When she sang “He was Beautiful,” by John Williams and Cleo Laine, it felt like there was somebody truly specific she was referring to. Her Edith Piaf Medley, in my opinion, could have gone on all night. It was a lovely rendering of the many songs of Ms. Piaf’s catalogue.

It is unfortunate that there was only one show scheduled for Iris Williams, for I would recommend this show to my classical singer colleagues to experience a true singing technician interpret these songs. However, she never lost sight of the meaning of the text. One does not have to “belt” or “sing their faces off” to convey true artistry and I was most grateful to have had this opportunity.

Iris Williams performed at the Metropolitan Room on October 22nd at 7:00 pm