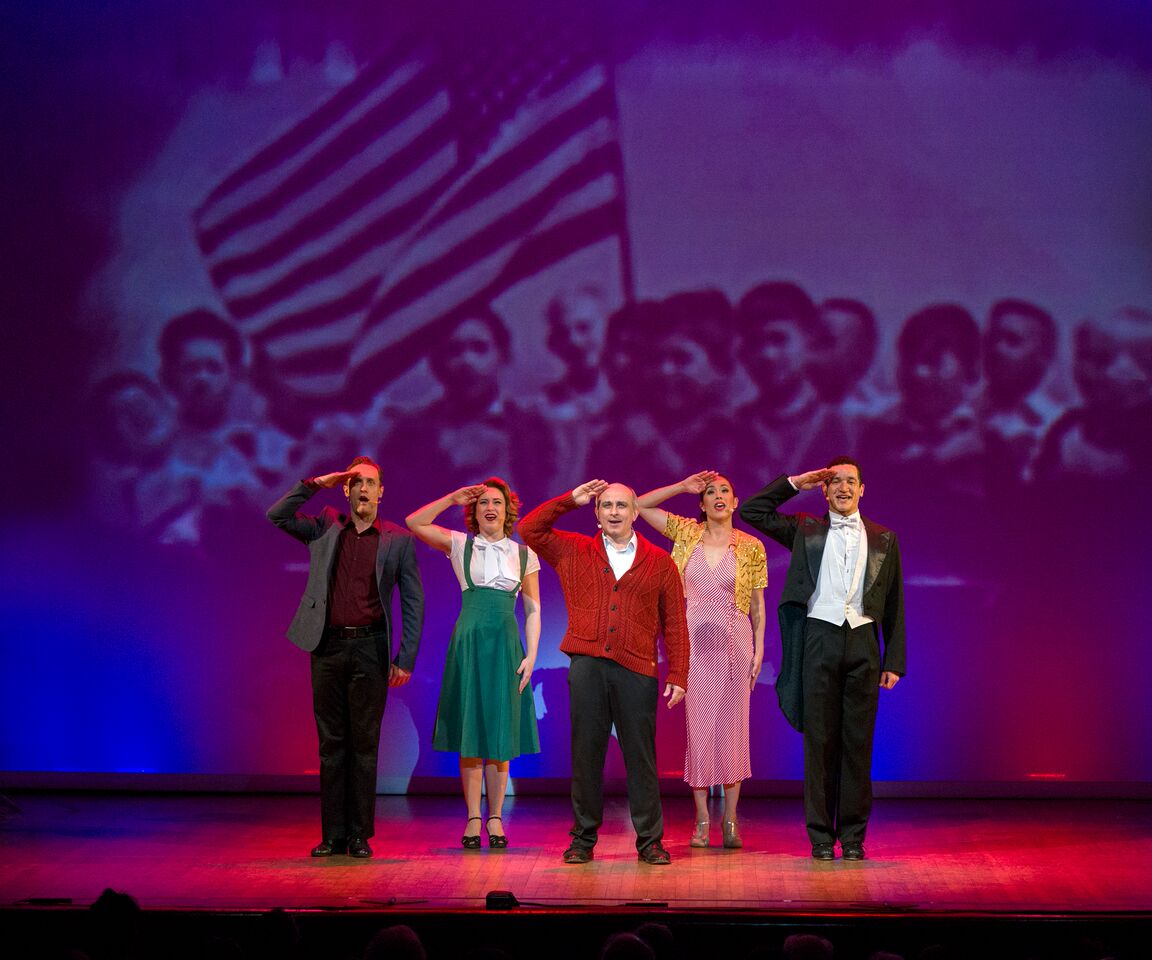 Jerome Kern has a famous quote: “Irving Berlin has no place in American music — he is American music.” On March 24-26, the 92Y presented the third in the 2018 Lyrics & Lyricist series to celebrate Irving Berlin and the 100th anniversary of his writing the iconic “God Bless America,” a song many people feel should be our national anthem. In a career that spanned over 80 years, Berlin wrote music and lyrics to an estimated 1,500 songs, including the scores for 20 original Broadway shows, 15 original Hollywood films, and was nominated eight times for an Academy Award. Noah Racey, who directed, choreographed and co-wrote the script, says in his program notes, that Berlin “transcended class and station and landed firmly in the ranks of the most celebrated names of our time.” The cast featured Stephen DeRosa as Irving Berlin with Jada Temple as a young songwriter interviewing him. The talented cast were all triple threats who could act, sing and dance: Holly Butler, Danny Gardner, Emily Hsu, and Richard Diaz Yoder. The golden-voiced Bryonha Marie sang “Blue Skies,” scored on the dramatic “Supper Time” and “Say It Isn’t So.” The concert featured a great deal of fine dance numbers and the opening “Marching Along With Time” (1938) was lively as each performer did a shortened version of early Berlin novelty songs from “Cohen Owes Me Ninety-Nine Dollars” (1915) to “Ephraham Played Upon the Piano (1911). The plot device to have Stephen play Berlin and Jada, a young songwriter interviewing him, was only intermittently successful and at times downright annoying. The script itself was awkward and sometimes embarrassing as I kept wondering why this woman was even there talking to Mr. Berlin. They were holding the scripts and reading from them as if this was the first time that they had even seen the words. In the second act when Stephen was freed from the script, his renditions of “Always the Same” (1963) and the classic “Always” were very moving. Alexander’s Ragtime Band (1911) put Berlin on the map, it was his first major hit and started a “Rag” craze as Danny sang “Everything in America is Ragtime (1916) and the cast “That Mysterious Rag” (1911) with music by Ted Snyder, and “That International Rag” (1913).

When asked how he got inspiration for songs, Berlin answered that he loved this country having emigrated here as a boy from Russia, and wrote “Got Bless America” to express that. The version that was cut from Yip, Yip, Yaphank, a 1918 revue was not the same version that we know. He also wrote “This is a Great Country” (Mr. President – 1962) that the cast performed with gusto. Some songs he wrote as a political statement like “Supper Time” for Ethel Waters in As Thousands Cheer – 1933, and others purely for entertainment and escape, like “Top Hat, White Tie and Tails” (1935). The second Act opened up with a wonderful version of “Steppin’ Out With My Baby” from the film Easter Parade (1928) that was both sung and danced. Berlin’s first wife died young and the next few songs covered his heartbreak with Holly singing “What’ll I Do?,” Danny’s “Maybe It’s Because I Love You So Much” (1933) and the lovely “Remember (1925), performed tenderly by Richard.

Danny danced and sang beautifully to a solo of “Cheek to Cheek” from Top Hat and again with “Puttin’ on the Ritz.” At this point Jada as the interviewer challenges Berlin on his lyrics to the song and it was all very puzzling and confusing. I wasn’t sure what was going on and what that was about. Happily the company all joined in for “Let’s Face The Music and Dance” (Follow the Fleet – 1938) to resolve the issues she raised about the responsibility of the songwriter. For the encore, the entire cast ended the show with the thrilling “God Bless America” that Berlin revised in 1928 as the original was different. However, even with my reservations about certain aspects of the production, the brilliant songs of Irving Berlin shone through, as well as the extraordinary talent of the cast, and the production team.