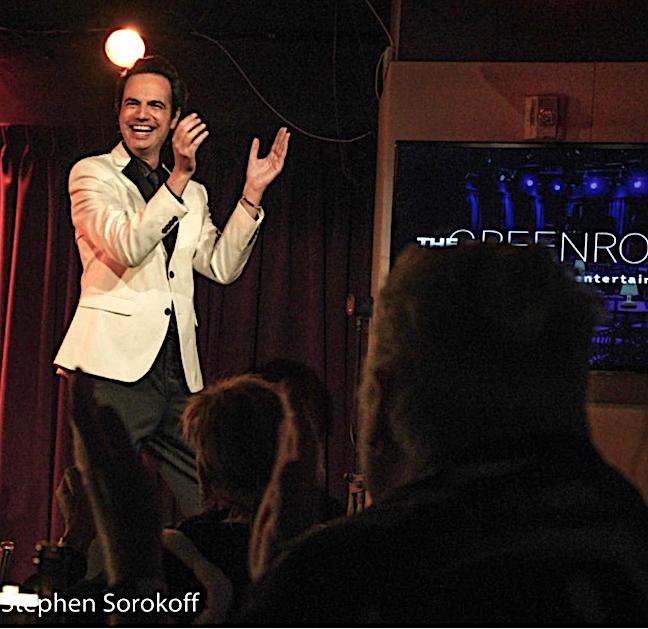 Israeli-born Isaac Sutton is a charmer.  He is tall, trim and handsome, with a warm, broad smile that displays his love for the audience as well as the music.  Sutton has introduced Israeli audiences to the Great American Songbook, and has performed lead roles in several Israeli productions of major Broadway shows including Company and Chicago.  Sutton has brought Broadway leading ladies with him on several tours of Israel and the United States and for his return to New York (for the first time since the pandemic), he gifted the Green Room 42 audience with two of his favorites, Amanda Jane Cooper and DeLaney Westfall.

Sutton came out on stage looking dazzling in black tuxedo pants and patent leather shoes, with a stunning black tie, crisp shirt, and a striking white dinner jacket, singing “Come Fly with Me” (Jimmy Van Heusen/Sammy Cahn). His snappy swing arrangement modeled on the original Billy May chart for Frank Sinatra transported us.

Describing himself as a bass-baritone, Sutton’s silky upper register is like that of a lyric baritone, giving him quite an effective range.  A polyglot who can sing in English, Italian, French and Hebrew, Sutton’s hint of an Israeli accent is a charm in any language or dialect.  In this show, he sang a variety of show tunes from several eras, and a few vintage pop songs.  Sutton gave generous stage time to his guests, with Cooper’s and Westfall’s segments comprising nearly half the show.

After several solo songs, and telling us what he’s been up to during the pandemic, Sutton brought up Cooper as his first guest.   The perky Cooper, (best known for portraying the 15th Anniversary “Glinda” in Wicked on Broadway), opened with the beautiful ballad “Popular” from Wicked (Stephen Schwartz) before performing a series of charming duets with Sutton.  Though she’s a pure soprano, she sang mostly in chest voice, which gave her singing more color for the material, as she performed her songs in character.  They did a delightful “Anything You Can Do I Can Do Better” from Annie Get Your Gun (Irving Berlin), and a funny, playful “The Rain in Spain” from My Fair Lady (Frederick Loewe/Alan Jay Lerner).

Sutton shared that his dream roles were “Bobby” in Company and Mr. Flynn in Chicago, from which he sang “All I Care About” (John Kander/Fred Ebb).  “The test of a song is not if the song went to number one, but if it touches the heart, and stands the test of time,” Sutton said, breaking into “Sunrise Sunset” to show his acting ability with a medley of songs from Fiddler on the Roof Jerry Bock, Sheldon Harnick).  The songs of the shtetl, with a few words in Hebrew, were the perfect lead-in for a crowd-pleasing Hebrew medley from the Israeli musical Kazablan (Dubi Zeltzer).  Here, Sutton left the stage to mingle with the audience while singing, moving from table to table, shaking hands and even personally serenading a couple of the beautiful female fans who came to see him.

His second Broadway star, DeLaney Westfall, joined him for four more songs.  Her gorgeous soprano voice blended perfectly with Sutton’s rich bass-baritone, with her soaring, operatic voice and his dynamic crooning.  Their two songs from Andrew Lloyd Webber’s The Phantom of the Opera, “All I Ask of You” and the title song, were show stoppers.  Westfall, whose Broadway credits include Kinky Boots and Beautiful, performed her songs, as Cooper did earlier, with full commitment to both the acting and the music.

The duo finished the show with an inspirational “Climb Every Mountain” from The Sound of Music (Richard Rodgers/Oscar Hammerstein II)) and a luscious “Somewhere” from West Side Story (Leonard Bernstein, Stephen Sondheim).

Of course, the enthusiastic crowd wanted more, and Sutton delivered with two encores, including a rousing “Man of La Mancha” (Joe Darion/Mitch Leigh).

Sutton brings much to the cabaret world: a fine voice, a deep knowledge of the material, and a contagious joy that makes one leave the room singing.  Backed here by a superb trio of Dan Pardo (Musical Director and pianist), Greg Orlando (double bass) and Matt Covey (drums), with solid arrangements by Pardo, they made the most of the Green Room 42 stage and excellent sound system.