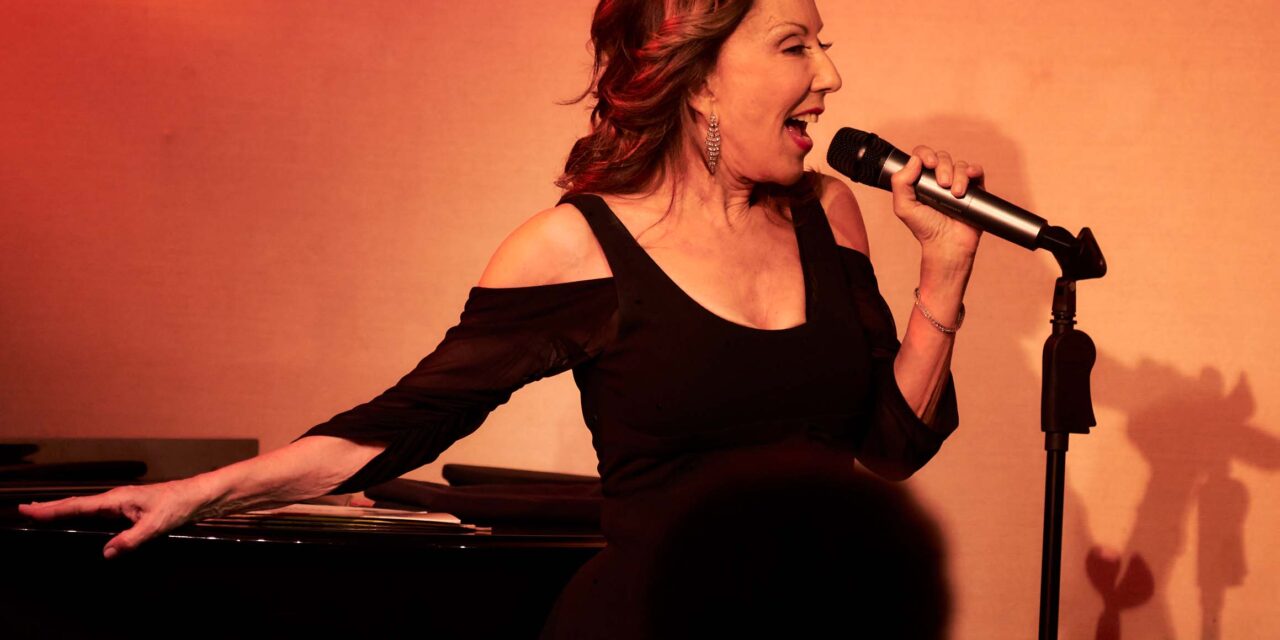 Every so often all the parts of a show might just come together in a beautifully optimal way. Such was the case with Judi Mark’s Merely Marvelous—The Songs Of Gwen Verdon. It started with an idea from director Jeff Harnar, who realized in working with Mark on the subject of a next show that Gwen Verdon would be an ideal focus. In taking that suggestion on board, Mark scored a winner.

Mark has grown a lot since her first cabaret show. Her background is dance. In shifting gears into the cabaret realm she challenged herself into a very different experience, which included song, constructing a showpiece with narrative and presenting it in the most intimate way possible—a small, dark cabaret room in the metaphorical lap of an audience. She’s worked tremendously hard at this craft and it shows in her vocalizations and ability to connect with said audience. When she began Merely Marvelous—The Songs Of Gwen Verdon at Don’t Tell Mama, she invoked the spirit of Verdon, and it was easy indeed to feel the presence of this icon of the musical stage. From “A Little Brains, a Little Talent” (Richard Adler, Jerry Ross), Verdon was definitely in the house.

The tour through Verdon’s life hit the high points and ones relevant to Mark. In the wisely developed, compact narrative, we learned, for instance, that both women, dancers before singers, were born with skeletal issues: rickets for Verdon and scoliosis for Mark; both were corrected through work and discipline, largely through dance. And while the similarities weren’t mirror images, the connection between the two women was strong enough to be relevant and engaging.

Verdon, who was born in 1925, was famously married for 27 years to another icon of the musical theater stage, choreographer Bob Fosse. The flaw in their marriage: he cheated on her repeatedly, which she more or less put up with—“Find Me a Primitive Man” (Cole Porter). This tune, recorded on Verdon’s solo album, “The Girl I Left Home For,” points a big arrow to Mark’s very strong suit—her comic ability. She has a natural bent for it, and her most successful and most relaxed musical output comes in songs and circumstances where humor and comedy is called for. “Charity’s Soliloquy” (Cy Coleman, Dorothy Fields) suited her down to the ground. In a nicely paced show, with an even, smooth flow, the mood shift from the comic in the soliloquy to the more sober “Why Can’t I?” (Richard Rodgers, Lorenz Hart) was deftly accomplished.

A highlight of Merely Marvelous—The Songs Of Gwen Verdon was the delightful vocal participation of music director Ian Herman and bassist Ritt Henn. Herman’s duet on “The 59th Street Bridge Song (Feelin’ Groovy)” (Paul Simon, Art Garfunkel) was a treat, as was Henn’s full-throttle rendition with Mark on “Two Lost Souls” (Richard Adler, Jerry Ross). Herman’s creative arrangements included a subtle and clever lullaby tone on “Me and My Baby” (John Kander, Fred Ebb). One musical exception in the Herman-helmed show was the Tex Arnold arrangement of “Where Am I Going” (Cy Coleman, Dorothy Fields), a tribute to Mark’s late, long-time pole star and music director.

An encore turn with the top hat of “If My Friends Could See Me Now” (Cy Coleman, Dorothy Fields) was especially apt. Mark has come a long way since her first cabaret and her can-do, determined spirit, backed by an unhesitating work-hard ethic will no doubt produce further growth—especially with the team now in place offering lots of brains and talent.