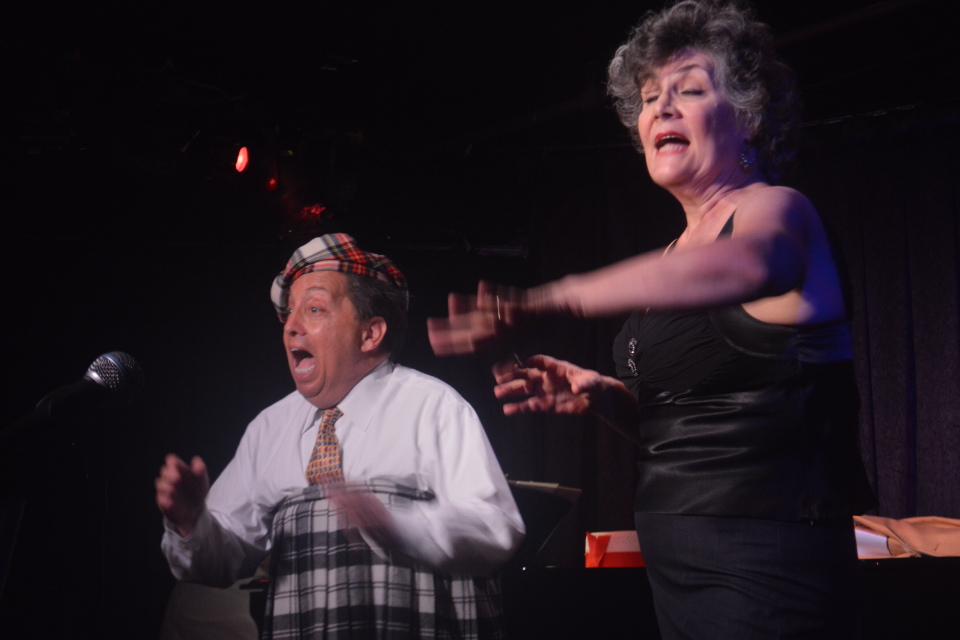 June 29, 2018 was very special. It was the date of the penultimate performance of Ricky Ritzel’s Broadway’s Triple-Consecutive Mac-Award-Winning Series before its Third Anniversary Celebration. Tada!

Harrumph to them who said it wouldn’t last! Them couldn’t recognize an addicting substance when they injected it. Nevertheless, on the last Friday night of June (as on every last Friday night of every month) Don’t Tell Mama’s big showroom was filled with buzzed fans cheering the svelter Ricky as he strode to the Steinway piano bench, weighing more than three stones less and with twice the energy he displayed before he reduced his former circumference by circumnavigating España on foot.

He announced in a strong, clear, powerful voice without a single huff or puff how this night’s RRB would be different from all other nights. Oy vey, did I have to pretend to like eating matzo. No. It meant that Ricky’s repertory company, the More than Ready for Prime-Time Players, rather than exhuming and dissecting their usual three Broadway Musicals, would be honoring eight exemplary Broadway Musical Revues (1940-1979) What’s a Revue? Unlike the book musicals that became de rigueur after Oklahoma, with story skeletons fleshed out with character illuminating songs, Revues were theme-based entertainments conceived by a compatible hip creative collective who melded melodies, clever lyrics, parodies and comic sketches into two hours of sophisticated, irreverent fun that mocked everyone but themselves. Revues were loved by Manhattan’s Café Society who shunned middle-class morality. Revues meant new performers, bold writers, ambitious lyricists, hip humorists. They were like America’s Got Talent finals, minus acrobats and with a lot more wit. Lisa Ellex, in a clinging turquoise satin frock and longer than elbow length black satin gloves, looked perfectly dressed for a “Life Goes to El Morocco” feature, ready to slip into zebra leather banquettes as she warbled “How High the Moon” (1940) introduced in Two For The Show by Alfred Drake, 1940’s Hugh Jackman. Lisa’s moon moved at an adagio pace before switching to allegro when Ricky’s newly slender fingers zipped along the keyboard with such vigorous ingenuity that he received the evening’s first sitting ovation. FYI the lyricist, Nancy Hamilton, became Katherine Hepburn understudy in The Warrior’s Husband, in which Kate arrived on stage with a stag slung over her shoulder, a performance which inspired Dorothy Parker to note in her review that Hepburn ran the gamut of emotions from a to b. The Littlest Revue (1956) produced two hilarious songs. In “Good Little Girls” the Vernon Duke tune was purred by the Goth-clad Tanya Moberly spewing lyricist Sammy Cahn’s variations on this coda: “Good little girls go to Bronxville, but smart little girls go to Deauville, to Trouville, to Naples, to Nice and Capri.” The second, “The Shape of Things,” with words and music by the 32-year old Sheldon Harnick (who became the Harnick on Bock and Harnick royalty checks ) was caroled by a devilishly cheerful Erica Lustig reporting the relationship between shapes and her life. For instance, the triangle: “And the selfsame shape is a garment thin, that fastens on with a safety pin, to a prize I had no wish to win…” Lisa Ellex returned with a sidesplitting tribute to “Gristede’s” (the supermarket) by Ronny Graham and Jules Monk from a Revue called Take Five followed by Sidney Myer’s singular “Merry Little Minuet,” Sheldon Harnick’s 1953 gloomy rumination about how the world will end. You already know. By something we do. Erica Lustig paid tribute to “April in Fairbanks,” where “the air is perfumed by the smell of blubber frying” from New faces of 1956, followed by Tanya Moberly’s parody of the Weil/Lenya cannon in “Das Chicago Song,” complete with a lying heel called Max who claimed to be a CPA. Tanya worked for four weeks to perfect her delivery.

Warren Schein and Kristine Zbornik miraculously reincarnated Sugar Babies’ perpetually lusty Mickey Rooney and the dancing feet and moving mouth attached to Ann Miller. Among other things, they warned us about the downside of love which included herpes, hemorrhoids, and diseases of the genitiles [sic].

Last was saved for the best revue ever: New Faces of 1952 with sketches by the great Ronny Graham and Melvin Brooks, songs by Sheldon Harnick, Murray Grand and Arthur Siegel. Among the new faces were Robert Clary, Alice Ghostly, Bill Lynde and Eartha Kitt who made her stunning Broadway debut complaining about the boredom of utter luxury. Aaron Lee Battle brought back her ghost breathy kisses and seductive vibrato with the aid of a perpetually tossed scarf. Kristine Zbornik’s “Guess Who I saw Today,” now a standard, as always, plucked at everyone’s heartstrings. Teresa Fisher’s rendition of “The Boston Beguine” was the showstopper of showstoppers and had everyone shrieking with laughter. Her flimsy hat, her tacky plastic handbag, her seersucker dress, and her look of perpetual innocence as well as her lack of malice even after she was betrayed was the evening’s 11 o’clock number.

The finale? A company hoedown warning Lizzie Borden that “You can’t chop your mother up in Massachusetts,” which took longer than the murder of her parents. I couldn’t help thinking Jay Rogers as the schoolboy in love with Miss Logan would have been an exquisite encore, but he and Aaron Morishita were busy directing and choreographing the show.