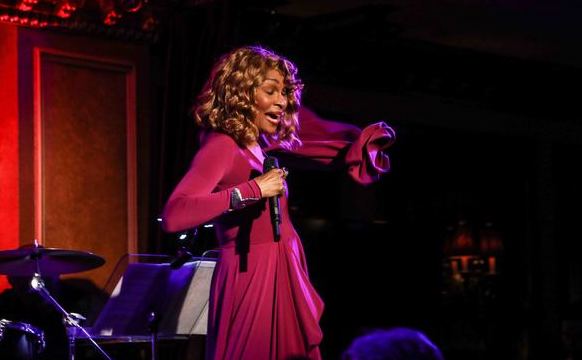 We assembled to celebrate, with Broadway Baby and cabaret veteran Vivian Reed, what would have been Lena Horne’s 101st birthday. Some of us attended the performance infused with the spirit of Horne, and others knew Vivian Reed’s work over the years. Whatever brought people into the room, Reed delivered theatrical history, her own life experience, and the barest whispers of inter-tune banter. And we pronounce it splendid.

The venue is one of Manhattan’s newest cabaret spaces. The Green Room 42 at the millennial-leaning Yotel hotel (with automated baggage check, vending machines, computerized check-in, and “cabins” rather than rooms), was, for this first-time visitor, a charming surprise. The young man who introduced Ms. Reed welcomed us to “Feinstein’s at the Hostel.” In fact, the surprise of The Green Room 42 is its timeless design and intimate feel, filled with comfortable tables (slightly raked at the rear for visibility), shadowy blue lighting, and purple-tinged walls, curtains, and carpet. Funky light switch mechanisms beckon waitstaff. “Turn it off if you want me,” my wait person instructs.

Vivian Reed made her Broadway splash as a dancer, singer, actress in Bubblin’ Brown Sugar and Marie Christine, toured internationally in book shows and cabaret, and now catching the resurgent interest in cabaret performance. She has wowed the crowds in recent years at New York City venues including the old Metropolitan Room, the new-ish 54 Below, and Kaufman Music Center’s Merkin Concert Hall. In each show I’ve seen in recent years, Reed has included an homage to the woman’s legacy that forms the core of this evening’s set list: actress, singer, movie star, stage veteran Lena Horne (1917-2010).

Reed assumed the stage with the grace and power of Horne, the object of her affection. I saw Horne’s Tony Award winning show The Lady and Her Music that opened on Broadway and toured for some time after (I saw it in St. Louis in 1982 or 1983). Reed’s glorious red ensemble evokes the flowing white dress Horne rocked more than three decades ago.

Reed’s connection to Horne was through her life and music rather than a personal relationship. They never met, though she was connected through Horne’s uncle, the Apollo accountant while Reed performed there, to Horne’s second-hand concert gowns which Reed welcomed as a young performer. Both women lived in Pittsburgh at points in their lives, and both survived a range of challenges. “Her life was about survival,” Reed noted, “which is why she became an artist.”

From M-G-M to Sondheim, Rodgers and Hart to Lerner and Loewe, Hoagy Carmichael (like Reed an actor-singer-musician hyphenate talent) to Cole Porter. Reed covered Lena Horne’s repertoire and made it all her own.

Reed’s musical ensemble took a tune or two to calibrate their volume to the room and the balance of musical strains. The set opener Sondheim’s “Old Friends” was a bit overwhelmed by Damon Duewhite’s percussion, and “On a Wonderful Day Like Today” (Anthony Newley and Leslie Bricusse) was swooping and upbeat, without resonant core. Yet all settled in after the introductory numbers, muted the percussion, and folded in James Davis on piano, Kenny Davis on bass, and Ayodelle Maakheru on guitar. A stunning medley of “Lover Man” (Jimmy Davis, Roger Rameriz, James Sherman) and “The Man I Love” (George and Ira Gershwin) rocked the room. Cole Porter’s “Just One Of Those Things” received a classic, slow burn, smoking hot delivery.

Horne’s signature “Stormy Weather” (Harold Arlen and Ted Koehler), that she introduced in the 1943 film of the same name, brought the house to its feet. Reed met that bar with Horne’s “Believe in Yourself” that she sang as Glinda in the otherwise misguided 1978 film adaptation of The Wiz. Reed delivered the tune with big emotion, big notes, to a huge ovation.

The show provided a modicum of Horne biographical detail to link the tunes, and even less context for the source material. You could leave this show without knowing that Vincente Minnelli helmed the all-black Stormy Weather in 1943 or that “Believe in Yourself” came from The Wiz. Reed has not crafted a seminar on the tunes but a story of our time. This heartfelt show is tied up with the solo delivery of Hoagy Carmichael’s “The Nearness of You” – a tune Reed admits is one she loves rather than one Horne ever performed. Reed walked slowly through the audience, table to table, holding hands with audience members, with houselights up, leaving us to quiet thoughts of her and her muse. A potent and heartfelt evening.