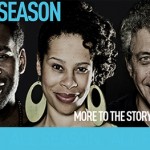 Opening the 2013-14 season in September is a new series of Artist Salons, offering intimate glimpses into the lives and work of Labyrinth’s multi-talented Company Members. Through informal performances and revealing conversations, each evening will stand alone as an opportunity for one artist to engage an audience on a uniquely personal level. The fall salons will focus on spoken word actor and playwright Craig ‘muMs’ Grant (September 9 & 10), two-time Tony Award nominee Daphne Rubin-Vega (September 16 & 17), and playwright David Bar Katz (September 23 & 24) Spring salons will be announced at a later date. Tickets to all salons will be available to the public for $10.

Beginning October 1, Eric Bogosian will read and perform selections from his new book, 100, which features one hundred monologues originally performed as part of his six Off-Broadway solo shows. The selections, which will change nightly, will include monologues from Sex, Drugs, Rock & Roll, Pounding Nails in the Floor with my Forehead, Wake Up and Smell the Coffee, and others. For these solo shows, which were originally performed Off-Broadway between 1980 and 2000, Bogosian was awarded three Obie Awards and a Drama Desk Award — earning him living icon-status in the downtown theater scene.

Sunset Baby, a new play by Dominique Morisseau, begins November 6.  An energized, vibrant look at the point where the personal and political collide, Sunset Baby tells the story of a former black revolutionary and political prisoner who decides to connect with his estranged daughter.  He quickly discovers that fatherhood might be the most challenging revolution of all.

In an effort to make great theater accessible to all New Yorkers, Labyrinth offers the Labpass, which gives audiences access to all in the 2013/14 Season starting at just $99.  To purchase a Labpass, and to find more information on the Season, please visit labtheater.org      155 Bank Street – West Village, NYC