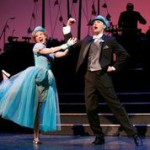 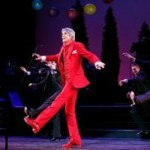 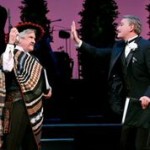 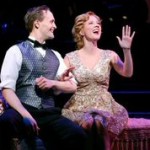 Unlike many City Center Encores! offerings, “Lady, Be Good!” is so old that it’s almost impossible that anyone in the audience could have seen the original production. And this unusual vintage gives this 1924 confection – originally a vehicle for Adele and Fred Astaire – a certain freshness, aided by the fact that Guy Bolton and Fred Thompson’s book is so ridiculous (in every sense of the word) that you can’t possibly guess what will happen next – except for the obligatory happy ending.

Moreover, only a handful of the ditties composed by George and Ira Gershwin will be familiar to modern audiences. Indeed, only the beloved title tune, and “Fascinating Rhythm” and “Little Jazz Bird” — two specialty numbers given to the still remarkable and seemingly ageless Tommy Tune — were recognizable to me. It was nice to be introduced to such lovely songs as “Hang On to Me” and “So Am I,” although it’s also clear why they never quite became standards. 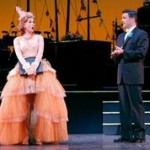 The show also contains tons of dance music and choreographer Randy Skinner serves up scads of sizzling tap and period dancing. It also looks great – thanks to a top-notch creative team led by scenic consultant Anna Louizos and costume consultant Michael Krass. And, it’s a true pleasure to have Encores! original music director, Rob Fisher, commanding the large, sublime orchestra (complete with not one, but two, pianos).

Still, you need a committed cast to make this kind of slight material come to life, which director Mark Brokaw has smartly assembled. Nothing I’ve ever seen Patti Murin do before prepared me for the stunning song-and-dance versatility this lovely actress shows as the sweet Susie Trevor. This role may be her ticket to true superstardom. Unsurprisingly, she plays quite well off her real-life fiancé, the bright-voiced (and sadly underused) Colin Donnell as her love interest, Jack Robinson. Murin also has a ball bantering with Danny Gardner, who plays her social-climbing brother Jack. Gardner, a brilliant dancer who bears a strong resemblance to Fred Astaire, is another huge asset to the show. 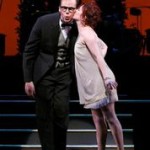 Still, Murin (or anyone else on stage) can’t steal a scene away from the marvelous Douglas Sills, who brings his first-rate comic timing and deliciously over-the-top line readings to the role of “shyster” lawyer J. Watterson Watkins. The remainder of the supporting cast – Erin Mackey, Jeff Hiller, Kirsten Wyatt, Richard Poe, and Jennifer Laura Thompson – don’t really have all that much to do, but they do what they’re asked to with panache. And the 20-person ensemble are a wondrous group of singers and dancers who are used to excellent effect.

Given the tireless inanity of the plot, I suspect not everyone will find “Lady, Be Good!” to be great fun. Rest assured, though, there’s still plenty on stage here for everyone to appreciate. 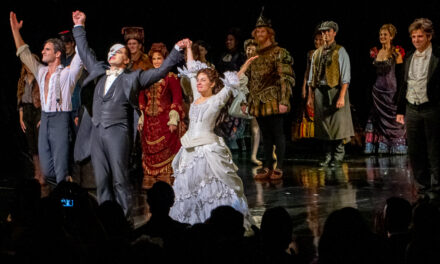