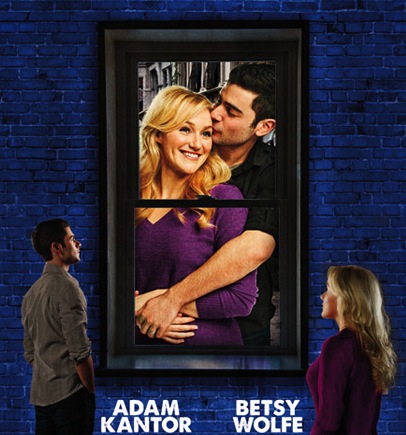 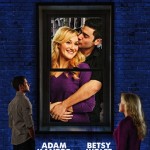 Jason Robert Brown’s The Last Five Years has had two major productions in New York City alone.  “The Last Five Years in Concert” at 54 Below is a no-frills version which turns out to be the finest, most heartbreaking rendering of Brown’s doomed modern romance.   With Brown at the piano leading an all-string band, Betsy Wolfe and Adam Kantor, the two stars of the Second Stage Theater’s production, gave mesmerizing performances.

They play Cathy, an aspiring actress and Jamie, a rising novelist whose affair and marriage is portrayed in a novel way.  Her story is told in reverse chronological order beginning with the disintegration of her marriage to Jamie and his from the time he meets her until the time he leaves her.  When their chronologies intersect in “A Miracle Would Happen/When You Come Home to Me,” both have revelations that seal their fate.  He suddenly realizes that he is now attached to someone and is, therefore, “untouchable” to other women and she realizes that his fame will doom them eventually as her lack of success permeates her life.  He is Jewish and she is not.  Jamie’s “Shiksa Goddess” is a hilarious number about the problems and pleasures of wanting her despite what it will do to his mother.  Adam Kantor is adorable when he sings this, his face beaming.  His transformation into the tormented cheating husband of an unsuccessful, drinking wife is remarkable.  Kantor is a boyishly handsome guy who somehow matures and darkens in front of our eyes.

Betsy Wolfe is equally adroit.  From her sarcastic picture of working in stock, “A Summer in Ohio,” to her bitter song about auditioning, “Climbing Uphill,” to the heartbreaking “Good-bye Until Tomorrow”  she portrayed a complex, troubled woman who clearly was not totally to blame for a complex relationship gone terribly sour.

In the post-Sondheim musical theater world, Jason Robert Brown is shaping up to be not only the most prolific jack of all trades—music, lyrics, librettos—but a major talent whose work illuminates whichever subject he is dramatizing and musicalizing:  Songs for a New World (an artistic song cycle), Urban Cowboy (a modern romantic morality tale), Parade (a period tragedy) and the current Honeymoon in Vegas (a Broadway bound musical comedy).  He also is a great arranger.  For this occasion, his richly complex charts for this re-imagined Last Five Years ranged from hints of Bach to Cha-Cha to lilting Country-Western waltzes,

Not many shows can pack such a wallop as The Last Five Years.  It was a privilege to be in a room with the composer, two great theater professionals and five great musicians and 54 Below, in the heart of the Theater District, was the perfect venue.

The Last Five Years in Concert