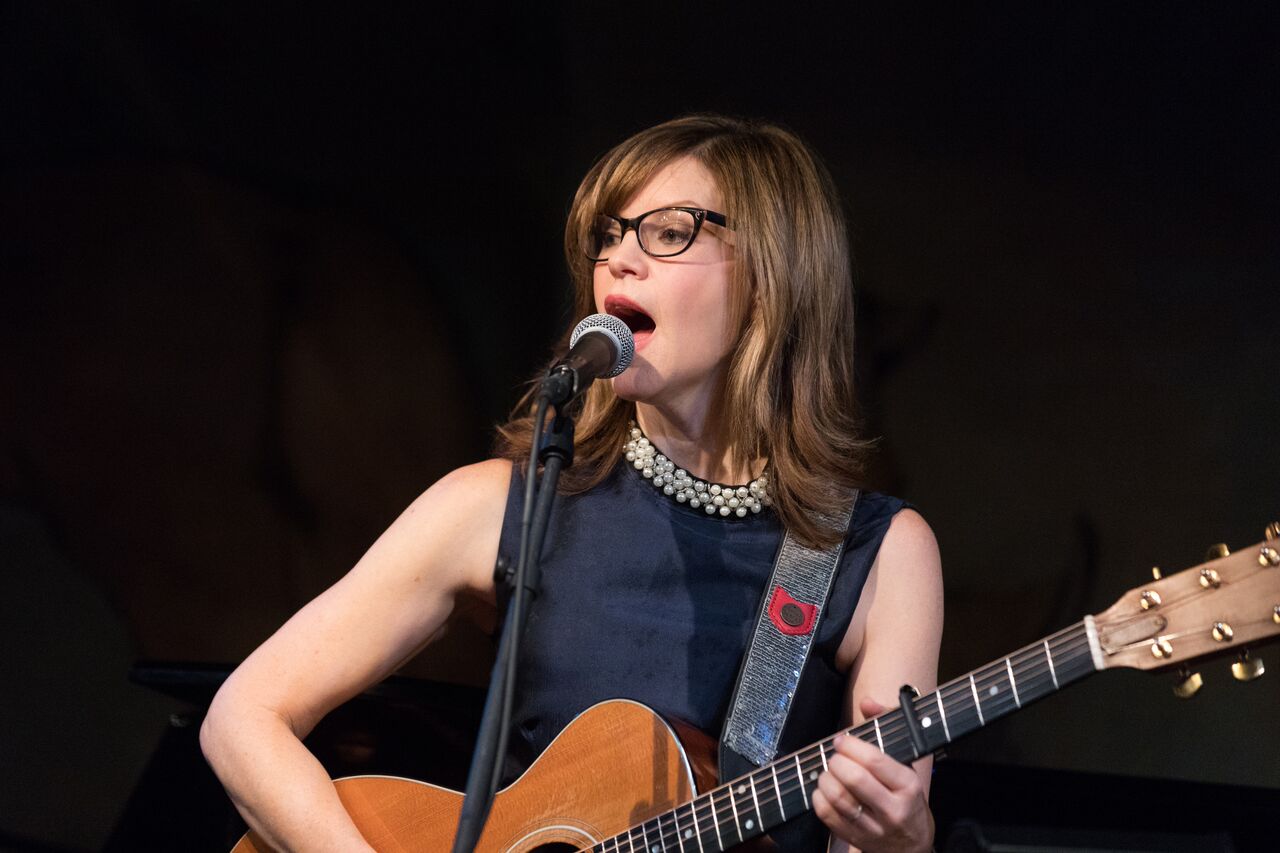 In an interview for an Indianapolis paper, when asked, “What’s it like performing for children?” Lisa Loeb responded, “For really young kids, it can be like playing for drunk adults.” There you have it, aside from being a platinum-selling #1 hit song “Stay (I missed you),” 90s pop star Lisa Loeb is funny and charmingly frank. She is a dynamo of songwriting and performance and has continued to create venues and top selling albums through the years. Since 2003, she has produced children’s albums as well.

She has brought her acoustic guitar and killer pianist Ted Baker with her to Café Carlyle through June 17. It is a perfect place for her. She chatted and told stories about her career, throwing out history in funny acerbic asides. She sang songs from different parts of her career: Opening with “Follow Your Wishing Heart“(an operating principle throughout her career, clearly) from her new album “Feel What You Feel,” she followed with the acerbic “No Fairy Tale” (“And, you can close the book and curse the turn it took; Tell the true story of how you fell; that’s a better one to tell.”) – –  “Falling in Love” (“she wanted to be a cowboy. She was tramping around…the time between meeting and finally leaving is sometimes called falling in love.”), “Do You Sleep” (“I don’t know, I don’t care if I ever will see you again”). She started playing the first chords of her classic “Stay (I Missed You)” and excited voices from the back of the room shouted out, “I played that at my wedding!” Answering back she remarked that she didn’t think it was exactly a wedding song, oh well…and continued to sing her most famous hit. She has fans wherever she goes and a great way with an audience. She brought in Ted Baker for the classics “Smile” (Chaplin) and her father’s favorite song “Dream a Little Dream Of Me.” She sang “Tomorrow” from the musical Annie with such freshness and depth, it almost achieved unfamiliar status. After, she introduced a star from one of her favorite shows the RuPaul Drag Race, her cousin Alexis Michelle. They sang “Rainbow Connection” (Paul Williams) and sincerely and beautifully brought the house down. Toward the end of the evening, she introduced her children’s song, “The Disappointing Pancake” as her “inanimate object food song,” and sang about a pancake that was too hard to eat but kept morphing into other shapes like a tire that fixed a flat. She ended with the song “Five Dollar Umbrella,” accompanied by Baker, which was another beautiful example of her unique gift for deep feeling peeking through a simple melody with a great beat.

She has promised that every night of her run will be different. And it will be—she has that much to share.