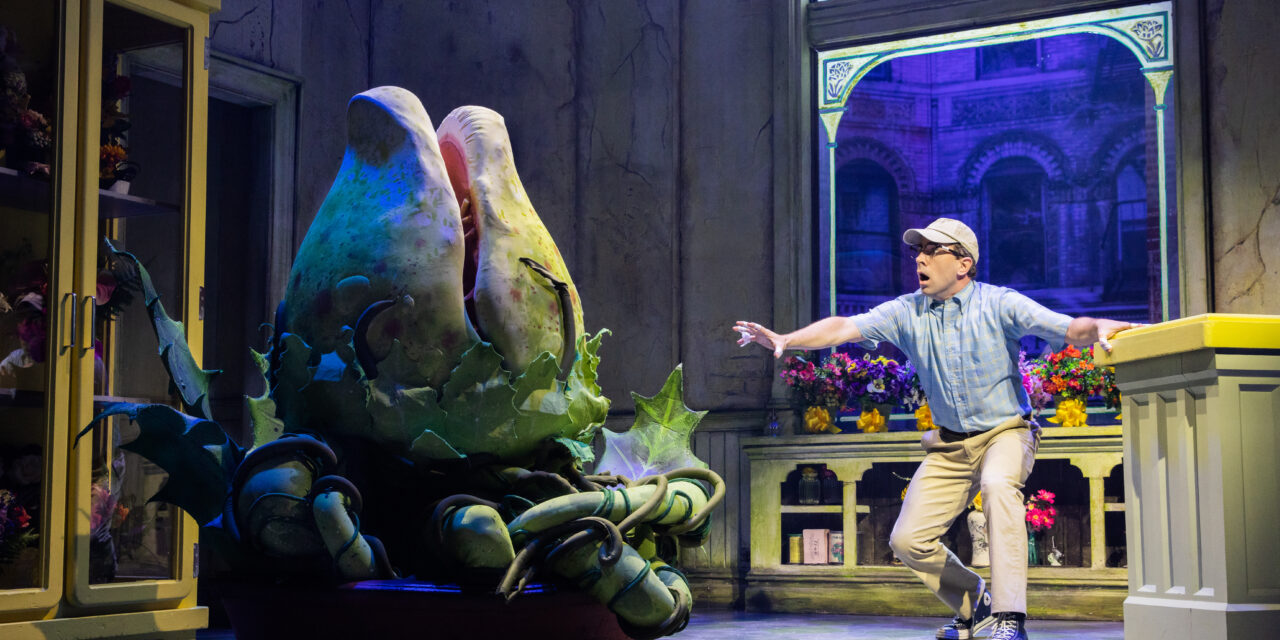 It’s a bloody, bloody world out there especially evidenced at the Westside Theatre as cult classic pop-rock musical Little Shop of Horrors creeps and crawls through your bod with the spooky, deliciously brilliant new cast in this off-Broadway continuing saga that will run forever. The brainchild of uber talents, Howard Ashman and Alan Menken, it has had many iterations. If you don’t know the genesis of Little Shop, read through to the end for the backstory.

Welcome to Skid Row’s dying flower shop, owned by Mr. Mushnik (the delightfully funny Brad Oscar) who desperately tries to keep his shop alive but is on the verge of firing his employees and closing. It’s his nerdy, goofy employee, Seymour (the perfectly cast Rob McClure) to the rescue when he reveals he has been tending to a new exotic plant, which he named Audrey II, in honor of Audrey (the tantalizing, sultry red-head Lena Hall) who works at the shop and with whom he’s secretly in love. The discovery of Audrey II gives Mushnik a reason to keep plowing ahead. Both McClure and Oscar are A+++ actors via Broadway’s Mrs. Doubtfire.

It seems that Audrey II has a peculiar diet – human blood. A conundrum for Seymour who walks around with bandaged finger tips trying to help his little plant survive with the small drippings he  can provide singing “Grow For Me.” Then there’s Audrey’s blood-curdling boyfriend Orin – the Dentist (the maniacal, all too scary, eye-popping, nitrus oxide puffing) amazing Bryce Pinkham – who also plays other characters.

Audrey has the black eyes, scars and broken body parts to bear when she doesn’t follow the rules Orin dictates, making her cower in terror each time repeating the line “I’m sorry Doctor” as she sings the most soulful, revealing “Somewhere That’s Green,” one of the show’s most notable numbers.

Seymour must save the beautiful Audrey from the sadistic Orin and this means keeping Audrey II alive. When the plant gives him the ultimate instructions of how this will be achieved “Git It (Feed Me”) – well, it’s not Seymour’s nature but love and the prospect of being adopted by Mushnik –“Mushnik and Son” – win out as the plant grows and grows into the huge green talking monster it ultimately becomes.

As the meek and mild Seymour makes his way to the bloody dentist’s office to execute Orin, he is relieved of actually pulling the trigger when Orin suffocates in his own sleekly designed nitrous oxide mask – “Now (It’s just the Gas).”

Seymour’s life changes (“Suddenly Seymour”) precipitously as the media and more clamor for a piece of him as Mushnik’s flower shop becomes a huge success and his relationship with Audrey takes hold. But at what cost . . .  as he is reminded, over and over again, by Audrey II it’s “Suppertime,” the blood curdling voice that of Aaron Arnell Harrington. – – the undertones of greed and corruption ever-present.

The Urchins Ari Groover, Tiffany Renee Thompson and Khadija Sankoh are a top notch trio strutting their stuff as are the puppet handlers Weston Chandler Long, Teddy Yudain (who also plays the Derelict) and Chelsea Turrin as Audrey II gets in your face.

Direction by Michael Mayer keeps the pace fast moving and you on the edge of your seat with both terror and laughter. As music supervisor, Will Van Dyke’s orchestral arrangements add just the right nuances to this pop, rock, do-wop styled musical.

This is probably the best piece of off-Broadway farcical musical theater you’ll see with a refreshing and talented cast that will knock your proverbial socks off.

THE BACK STORY: The popular sci-fi storytelling of “Little Shop of Horrors” . . . In 1956 sci-fi author Arthur C. Clarke was inspired by the master himself H.G. Wells to write a book – “The Reluctant Orchid” – about a man who tries to use a deadly plant to murder his aunt and leave no traces.

In 1960, screenwriter Charles B. Griffith was inspired, via this book, to write the cult classic horror movie “The Little Shop of Horrors” evolving it into a humble florist who uses a man-eating plant to get rid of his enemies and raise his status.

But the movie had no singing or dancing until a young writer, Howard Ashman, became engrossed with the film characters and derisive tone. It took years working with composer Alan Menken to bring the campy, spooky classic to the stage and capture the fun and retro feeling with a do-wop and early R & R musical style.

It began on the stage of the 98 seat WPA Theatre (1982) running for 24 performances and quickly moved to the Orpheum Theatre where it ran for over 2000 performances over 5 years; toured the nation and brought the man-eating plant to London’s West End (1983, 2006/2007) and Sydney’s Theatre Royal (2016) within 3 years of the New York premiere (2019). It was  adapted to a revived film (1986), a Broadway run (2003 – Virginia Theatre with Hunter Foster & Kerry Butler) and has become the most popular unique horror comedy rock musical of all time.

Capturing the grimness, greed and misused power, Ashman and Menken produced the ever-enduring musical you can now witness at the Westside Theatre.

Note: Additional Photos will be added with new cast members