Liz Callaway: A Hymn to Her- A Genuine Pleasure 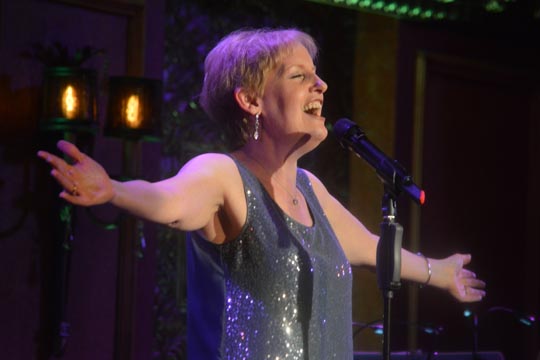 Few vocalist/actors connect with an audience as directly as Liz Callaway. Once, she tells us, cripplingly shy, the artist always seems disarmingly unaffected and open. There’s a bit of her in every role she plays which translates, in song, to palpable sincerity. Even outside plays, lyrics are given emotional and situational context rather than merely musical framing. Though inhabiting a character gives her a little distance, anecdotal banter does not. She’s immensely likeable.

“I was teaching a Master Class recently in Denmark or was it Akron, when a student asked, when you were younger, who were your inspirations?” A Hymn to Her loosely celebrates some of the important female influences in Callaway’s career, placing each along her journey to date. These women, most of whom she’s met, set personal examples of distinctive talent and/or generosity, often despite status …

Callaway begins with Alex Rybeck’s skillful inter-weaving of “Love is All Around” (Sonny Curtis/Tony Hatch- theme from The Mary Tyler Moore Show that opened with throwing her hat in the air) and “Who Am I?” (Jackie Trent.) Professional her entire adult life, the veteran can still manifest an exuberant, naïve young woman. Last notes extend long enough to tie a bow. Later we hear a lovely arrangement of David Shire/Richard Maltby Jr.’s “I Hear Bells” which emerges daisy fresh. (Pretty much nobody sings Maltby/Shire better than this artist)

Musical theater changed the Chicago native’s life “from black and white to color.” We hear about her moving to New York, securing a first Broadway gig at 19 (Merrily We Roll Along) and having almost immediately to decide between it and a competing offer from The Public Theater (Gallery.) She could be a 12 character swing with the commitment to become understudy or star Off Broadway with a promise to have her first cabaret show directed for free. What nascent actress hasn’t longed for such problems? Callaway chose Broadway. The show ran two weeks. Gallerynever opened.

Years ago, admiring Barbara Cook’s interpretation of “In Buddy’s Eyes”…I’m young, I’m beautiful…(Stephen Sondheim-Follies-In Concert) she realized, “you have to be so much older to try it.” The time has come and Callaway delivers in spades. The song’s verse is conversational, its chorus genuinely moving. This Sally is proud, grateful, and a bit shaken by realization. Spot on.

“Everything Changes”…when you become a mother (Sara Bareilles – Waitress) sails in on Jared Egan’s eloquently bowed bass, Rybeck’s tiptoeing piano, Ron Tierno’s pat and brush percussion. What did I do to deserve you?asks Nicholas Foster’s mom. I can heal and I can breathe/’Cause I can feel myself believe…Callaway sings, palms open, deeply inhaling ; her heart on her sleeve. The tandem “Being At War with Each Other” (Carole King) and “At the Same Time” (sister Ann Hampton Callaway’s beautiful ode to connection) arrive as if a maternal message …Think of all the hearts/ Beating in the world/At the same time…Come together the latter song pleads. At the other end of the musical spectrum, Pink’s terrific “What About Us?” suggested to Callaway by Billie Jean King, is a contemporary to-the-barricades number: We are searchlights, we can see in the dark/We are rockets, pointed up at the stars/We are billions of beautiful hearts/And you sold us down the river too far…Heads bob, feet tap; people seem ready to rise from their chairs.

“Two Little Sisters” (Carly Simon-Marvin’s Room), a nod to the artist’s beloved sister (in the audience) is utterly charming; a gentle hurdy-gurdy strain conjuring two little, barefoot girls teasing the tide. Callaway shimmers with affection. Her droll story about Nora Ephron introduces “Coming Around Again” (Carly Simon from the writer’s film Heartburn). Exhausted and jaded, the character nonetheless grasps optimism with both hands. I believe in love– Callaway shrugs, eyebrows rise- What else can I do? Lyrics take flight.

Lauren Mayer’s uber-clever adaptation of “Another Hundred People” from Company, “Another Hundred Lyrics”…just flew out of my brain… requires the kind of complete focus, vocal skiing, pristine enunciation, and vivacity that endears Callaway to Stephen Sondheim. Not a stitch is dropped. “Sing Medley” with reference to Marilyn Maye’s medleys, wit and wisdom, again showcases Rybeck’s superb arranging skills. Callaway seamlessly skates from one rhythm/genre/mood to another, propagating infectious fun.

I’ve heard the artist sing “The Story Goes On” (David Shire/Richard Maltby Jr. – Baby), which she first performed on Broadway in 1984, on any number of occasions. Tonight it’s viscerally different. Liz and Ann’s mother passed not too long ago. Lyrics now surface with even more meaning, rife with love and pathos.

The show is a pleasure.

Liz Callaway: A Hymn To Her