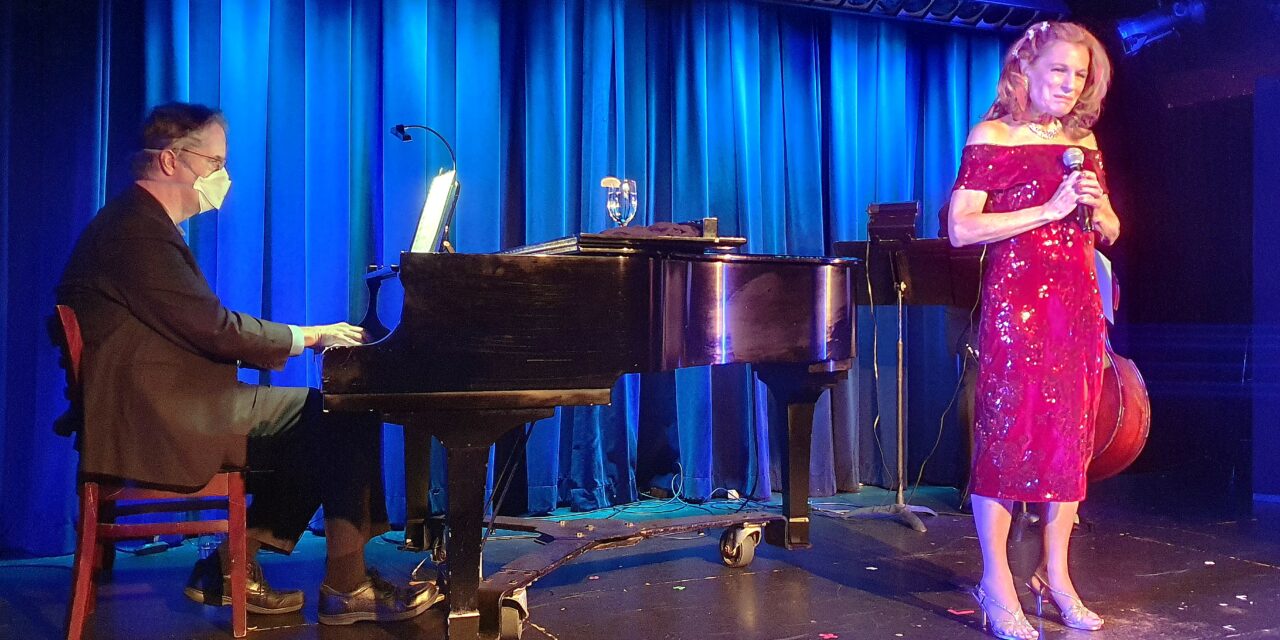 Singer Madelaine Warren returned to the Laurie Beechman Theatre for an encore performance of Invitation. The classically trained soprano has been on the cabaret scene for some years.  With the assistance of acclaimed director Barry Kleinbort, she presented an inviting and entertaining evening of songs and stories.  Her song selections were diverse and unique, with more than a few happy surprises.  Ms. Warren was accompanied by the brilliant musical director and pianist Christopher Denny, with Tom Hubbard on bass.

The slender Ms. Warren, dressed in a sparkly red gown that went well with her ginger hair, opened with “Watch What Happens,” the English-language version of Michel Legrand’s “Recit de Cassard” from The Umbrellas of Cherbourg.  While she is a good singer who often shifts between chest and head voice for dramatic effect, Ms. Warren’s biggest strengths lie in her interpretive skills, comedic timing, and an ability to treat the more emotional songs almost as if they were short plays.  For “Undecided,” originally a big band instrumental by Charlie Shavers, she humorously acted out the lyrics.  She told the charming story of first hearing the song when her mother sang along to it on the radio.  She was stunned when her mother left her father after 37 years and nine children, and this set up a poignant “But Beautiful,” from the Hope and Crosby comedy Road to Rio.

The haunting show title song, “Invitation,” is a challenging tune by Paul Francis Webster and Bronislau Kaper.  It weaves in and out of major and minor key changes and sonic directions in much the same way as “Lush Life,” and Ms. Warren nailed it.

Ms. Warren’s story of a stray cat who wanted what we all want – connection – set up “How Little We Know” (Hoagy Carmichael/Johnny Mercer) from To Have and Have Not.  (Song titles cannot be copyrighted, so this should not be confused with the popular Frank Sinatra song written by Carolyn Leigh and Phillip Springer.)

Speaking of Sinatra, Chris Denny’s wonderful arrangement of “All or Nothing at All” set off the drama of the lyric that had been hiding in plain sight since Frank first recorded it with Harry James in 1939.  Ms. Warren’s increasingly urgent, tearful interpretation was powerful.

Ms. Warren song showed off her naughty side with Rodgers and Hart’s “Bewitched,” acting the song with an emphasis on the more risqué lyrics.  The unusual choice was made to move the verse to the middle of the song as a second bridge.

At times, Ms. Warren wrings every bit of pathos out of a lyric.  Though she comes perilously close to chewing up the scenery, her approach is generally quite effective, since she seems to convey genuine emotion.

Much like the gem of a song Ms. Warren sang from The Road to Rio, another great surprise was “Love is Where You Find It,” from The Kissing Bandit, an embarrassing film Sinatra starred in near the nadir of his career in 1948.  The arrangement has something of a “Luck Be a Lady” vibe to it, with operatic scales and a big soprano finish.  (In the film, coloratura Kathryn Grayson had a field day with this song.)

After singing some very vintage songs from the 30s through the 60s, Ms. Warren performed a lovely rendition of the 1989 “Chanson,” from The Baker’s Wife” (Stephen Schwartz).  She closed out the show with “For All We Know.”  Though, for all we know, we may never meet again, my recommendation is to take Ms. Warren up on her Invitation, and see her next performance.