Marilyn Maye is the Talk of the 92Y 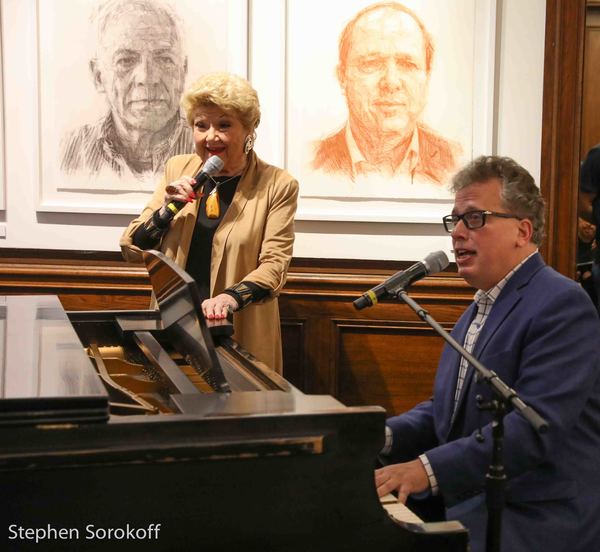 If it’s Marvelous Marilyn Maye anywhere, there’s a cadre of press and fans who want to be there!   And on Monday afternoon Oct. 23, the Marvelous One was, as always, revealing something new and exciting about herself, her professional career and some personal tidbits that make you sit up and take notice.

In conversation at the 92Y with Harvey Granat and Will Friedwald, the master of unearthing video clips, the audience was again mesmerized as Ms. M the “eighth wonder of the world” (per Granat) went way, way back in time with childhood memories of her musical career starting when Mom, a piano player, said “don’t let me down” as Marilyn (named after Marilyn Miller) won her first radio singing competition, resulting in her own radio spot at age 11. The stories abound as her career quickly moved along – from marriage to piano player Sam Tucker to that phone call from Steve Allen that really started the ball rolling in the recording business, leading to her contract with RCA. That all, of course, led to the Johnny Carson show (76 times!), Merv Griffin, Ed Sullivan etc.

Before “Cabaret” was Cabaret (stage or movie), Ms. M was singing the song in “iffy’ bars, in TV appearances and in those videos that appeared during the 40s – 60s in jukeboxes, which she called “quarter grabbers.” Will Friedwald proved it all with fantastic clips showing the exceptional Marilyn Maye, in sparkling gowns, with some really sexy backup dancers. In those days, she was singing five tones higher… and sounded great! Of course, as singers do, as life moves on, they lower their keys. But that hasn’t affected Ms. Maye at all. She just sounds huskier and sexier in tonality with a delivery that always knocks your proverbial socks off! Her appearance on the Bing Crosby show singing “Misty” was an all-time treat, as was her movie spot as Texas Guinan with Tony Randall. And Ms. M certainly had some interesting backstories to share on this one!

As we all know, Marilyn Maye is the Queen of lyric interpretation, understanding that lyricists are great poets. Her favorite writer: Johnny Mercer. For those who don’t know, Ms. Maye has starred in major 9000 seat amphitheaters in Kansas City and elsewhere, in the title roles in Can Can and Hello,Dolly! In fact, if Jerry Zaks was paying attention, he’d be calling her to take over the role on Broadway! And while we’re at it, a note to the New York Pops . . . time to star Marilyn Maye at Carnegie Hall.

On hand was her pianist of 35 years Billy Stritch, whom she met in Houston when he was 19 and playing in a local bar. It didn’t take long for them to hook up and stay together all these years. And so, accompanied by Billy, Ms. M sang her most requested song “Guess Who I Saw Today,” (Murray Grand, music/Elisse Boyd, lyrics) always with all the intention and meaning it deserves. If you missed this event, you’ll have four opportunities to catch Marvelous Marilyn Maye at the Appel Room at Lincoln Center on Friday, Oct. 27 and Saturday, Oct. 28 where she’ll be doing two shows each evening (7 and 9:30 pm).

And, don’t forget she’s always in great demand doing her Master Classes when she’s here in New York City where you can either participate, sing and be critiqued or come in as an observer. www.marilynmaye.com

Photos by Stephen Sorokoff and Magda Katz as noted.