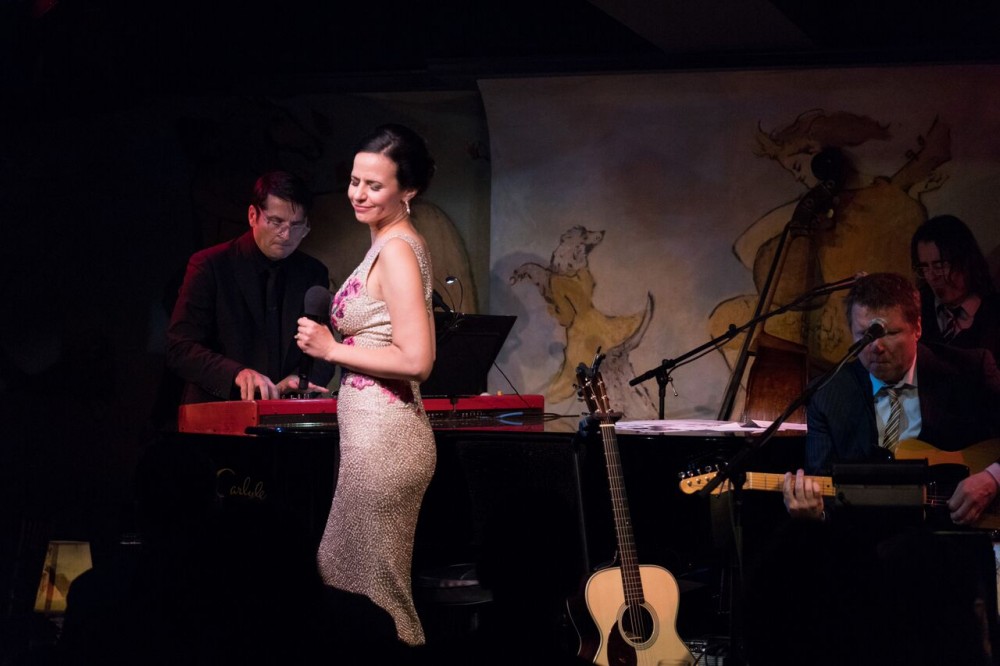 On a two week hiatus from her starring role as Angelica Schuyler Church on Broadway in Hamilton, Mandy Gonzalez debuted her show Fearless at the Café Carlyle on Tuesday evening, October 24, with a kick-ass band led by John Deley (on piano and vocals) with Matt Beck on guitar/vocals, Richard Hammond, bass/vocals and Abe Fogle on drums. In conjunction with tonight’s debut, Fearless, her new music video, was simultaneously released. Tall, slim with upswept hair, wearing a long plunging neckline gown, she looked gorgeous. Mandy is one hot tamale as evidenced by her opener “Raise the Roof” (Andrew Lippa) – Latin style. In fact, the major part of her show songs are Latin, R & B rock rhythms that offer special and new material, along with the tried and true, but each with a new twist. Songs like “On A Clear Day . . .” (Burton Lane/Alan Jay Lerner), “Only Have Eyes For You” (Harry Warren, Al Dubin) and closer “Que Sera Sera” (Jay Livingston, Ray Evans) were presented in these new arrangement styles and tempos.

The theme of Mandy’s show is based on the realization that her future is unlimited, mostly brought about by her relationship with her Dad who loved to sing, he being the impetus to her future in music. But he stopped singing when he returned from the Vietnam War, the impact forever embedded and “Get Ready” (Smokey Robinson) was offered as a send up to him.

She’s well aware of the enormity that dreams come true with a look back on her ascending career on Broadway (other credits Wicked, In the Heights) and appearances on Madame Secretary. She’s sexy telling Kristy MacColl’s story “In These Shoes,” with new directions in Tom Kitt’s “Everyday” and soars on “Breathe” (Lin-Manuel Miranda – In The Heights where she played Nina) along with “Born to Run” (Bruce Springstein).

Mandy Gonzalez is a powerful singer with a high belt who can wail with the best of them. But she is also cutesy, funny ”Being Green” (Joe Raposo) in a whole new soft rock arrangement and puts a new spin on “Defying Gravity” (Stephen Schwartz) as she recalls her role in Wicked as Elphaba carrying that 10 lb. broom around. Friend and guest artist Christopher Jackson – who originated the role of George Washington in Hamilton –   soared together on “Life is Sweet” (Jennifer Nettles/Bill Sherman), an ode to her motto to take all you’re given and turn it into love.

Many Broadway artists need time transitioning from that big stage to small intimate spaces so as to make their patter more real and engaging, which I know will happen with Mandy. The other distractions are closing her eyes consistently and sitting down on a stool through so many of the songs.

This aside, Mandy Gonzalez is a star to be reckoned with as her vocal capacity, intonations and emotions are foremost. And who else can claim they called Lin-Manuel Miranda to ask him to write a song to commemorate the title of her new album, and this show, “Fearless!”

The show is directed by Eric Michael Gillett.

My guest, Marilyn Maye, had a lovely evening!