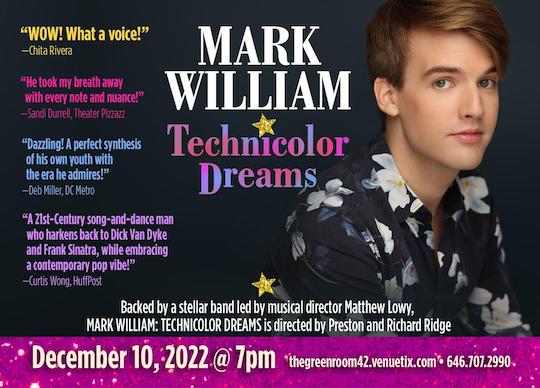 This show has been custom built to take you on a fantastical and cinematic journey, with repertoire ranging from Stephen Sondheim to Peter Allen, Jule Styne to Bruno Mars and Mark William himself. Critics and audiences have consistently been thrilled with Mark’s performances. The Huffington Post called him “A 21st-Century song-and-dance man who harkens back to Dick Van Dyke and Frank Sinatra, while embracing a contemporary pop vibe!” Upon hearing Mark sing, Chita Rivera exclaimed “Wow! What a voice!” Mark’s critically-acclaimed nightclub acts regularly pack in audiences around New York City, as well as on the Feinstein’s circuit of clubs, in regional theatres, and on luxury cruises. Mark’s award-winning album, Come Croon With Me, is available wherever you get your music (just ask Alexa!).

In October 2021, Mark made his debut at Yankee Stadium, where he had the honor of performing God Bless America during the 7th inning stretch.

Mark is also the lyricist and star of the new musical, Dorian’s Wild(e) Affair, which will make its NYC premiere in 2023.

Tickets for “Mark William: Technicolor Dreams” are available at TheGreenRoom42.venuetix.com – Can’t be there in person? There is also a livestream option available.