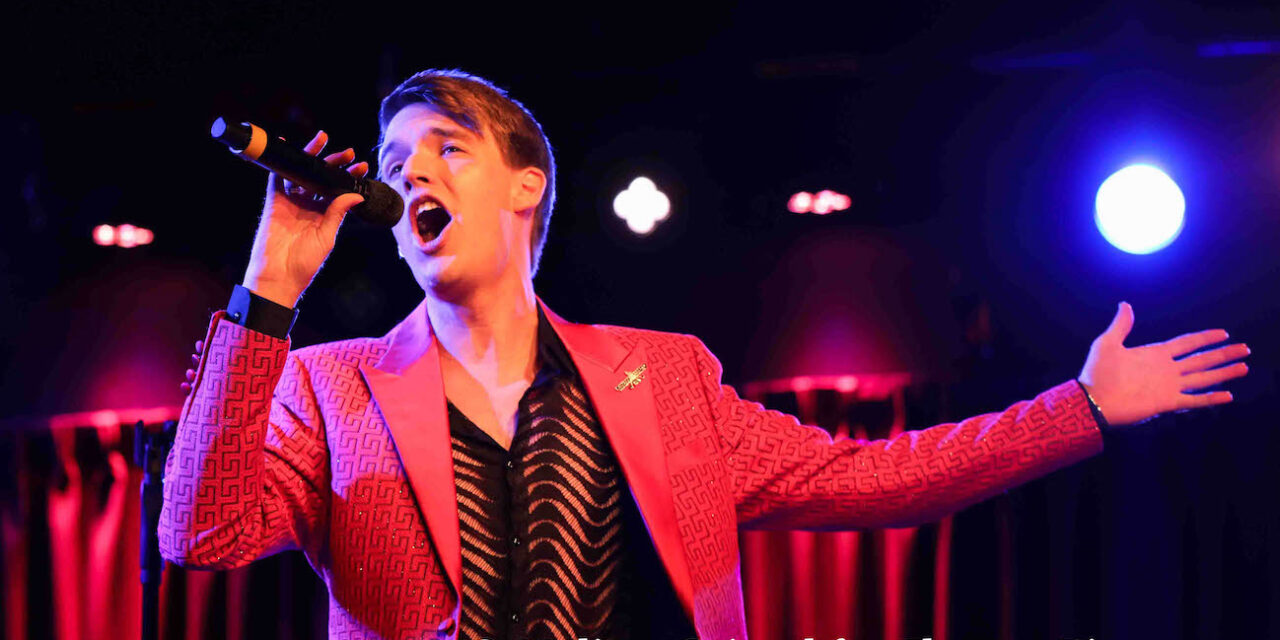 Few entertainers can put a smile on your face – and keep it there for over an hour – as well as Mark William, whose sunny disposition, Las Vegas-style razzle-dazzle and Midwestern charm again aligned in perfect harmony during “Technicolor Dreams,” which debuted on Saturday, December 10 at the Green Room 42 under the savvy direction of Preston and Richie Ridge.

As has been true of William’s previous shows, his set list focused primarily on love songs and messages of positivity, including an opening trio of “You’d Better Love Me,” (Hugh Martin, Timothy Gray), “It’s You Again (Walter Marks),” and “Love Is in The Air” (Harry Vanda, George Young), each of which proved to be a showcase for his thrilling crooner-like voice.

Still, if one wasn’t quite clear why he opened the show with these songs, good as they are, his other choices benefitted from some succinct explanations. For example, an emotionally intense medleyof “The Girl from Ipanema” (Antonio Carlos Jobim, Norman Gimbel, Vinicius De Moraes), “The Look of Love” (Burt Bacharach, Hal David) and “The Way of Love” (Jacques Dieval, Mariano Ruiz, Al Stillman) was the perfect way for William to show off his chops as a storyteller as he successfully made a one-act play out of these three classic tunes.

William chose to pay tribute, yet again, to the great star Peter Allen – Williams’ most obvious role model — this time through a soaring version of “When I See My Name in Lights,” followed by a playful “Everything Old Is New Again,” and a pensive “All I Wanted Was the Dream.” Sweetly, William also honored the late, great Angela Lansbury through a joyous mash-up of Jerry Herman’s “It’s Today” and “We Need a Little Christmas” (both from Mame).

One of the most heartening things about the show was that Williams’ emotional connection to his material has grown throughout the years, as evidenced here by his top-notch renditions of “The Music That Makes Me Dance” (Jule Styne, Bob Merrill), “Feelin’ Good” (Anthony Newley, Leslie Bricusse) and “If I Can Dream” (Walter Earl Brown), which was a megahit for Elvis Presley.

Not surprisingly, William also put his heart and soul into three of his own compositions: “Wherever We Land,” “Open the Door,” and “The Power of My Name” (co-written with Andrew Morrisey), which is from an upcoming musical based on the works of Oscar Wilde.

A crowd-pleaser through and through, William smartly closed his show with what has become the world’s most popular Christmas song, Mariah Carey’s “All I Want for Christmas is You,” which had the audience singing along and dancing in their seats. It may be the start of a new tradition, especially as what many cabaret goers will want each holiday season is another chance to see William work his onstage magic.