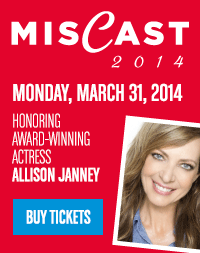 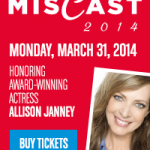 The evening will begin with a cocktail hour and gala dinner followed by the Miscast performances.  Gala and show-only tickets are now on sale at www.mcctheater.org.

An online auction is also underway at: www.charitybuzz.com/mcctheater.  Among the items available for bid: walk-on roles in the Broadway hits  Kinky Boots, All the Way, Beautiful, and The Bridges of Madison County; a singing cameo in Motown the Musical; individual lunches with Jonathan Groff, Christian Borle, Jesse L. Martin and Keegan Allen.  Up-and-coming performers may want to bid on: a private dance lesson with Tony® Award winning choreographer Jerry Mitchell; a private session with Bernie Telsey; or an audition coaching session with a top Broadway casting agent and a legendary Broadway performer, among many others; among many others.

MCC Theater’s annual Miscast gala is one of the most exciting and unique theater events in town. Broadway’s hottest stars perform songs from roles in which they would never be cast.  For a video recapping last year’s Miscast, click here.

Ms. Janney will be celebrated for her bold, daring, risk-taking spirit and for her extraordinary career on stage, in film, and on television, including memorable roles in the Oscar-winning films American Beauty,The Help, and Juno, among many others, and her unforgettable work on NBC’s “The West Wing” and new hit CBS sitcom “Mom.”  Her history with MCC Theater dates back two decades, including a main stage appearance in Alan Ball’s Five Women Wearing the Same Dress in 1993, Annie Evans’ I Can’t Stop Thinking Today, and MCC’s early play marathons.

Proceeds from Miscast 2014 will, as always, support MCC Theater’s mission to develop and produce exciting work Off-Broadway, as well as its Youth Company and partnerships with New York City public high schools, and MCC’s literary development work with emerging playwrights.

MCC is proud to announce that Viceroy New York is the Official Hotel Sponsor of Miscast 2014.