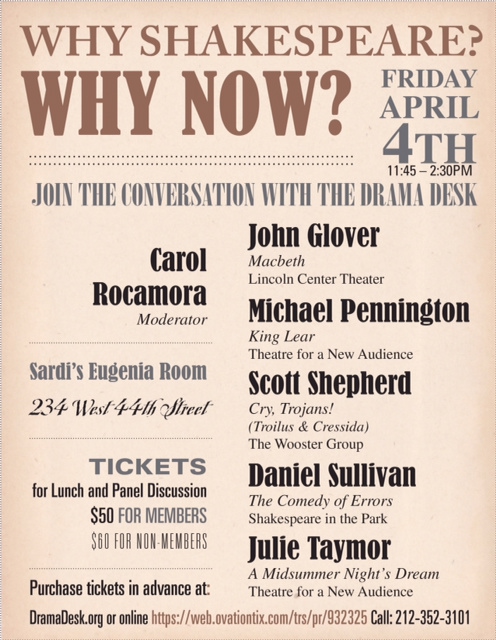 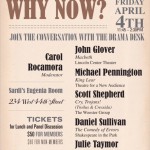 New York’s theater season has struck a welcome chord with both critics and audiences thanks to the critically acclaimed Shakespeare’s Globe productions of Twelfth Night, or What You Will and Richard III (in repertory at the Belasco Theater), Lincoln Center Theater’s Macbeth, the Bard’s The Comedy of Errors (Shakespeare in the Park), King Lear and A Midsummer Night’s Dream (both by Theatre for a New Audience in Brooklyn), and the Wooster Group’s Cry, Trojans! (Troilus & Cressida). The other members of the panel have all distinguished themselves this season in these new productions of Shakespeare’s works: British actor/director Michael Pennington (King Lear) and Julie Taymor (A Midsummer Night’s Dream) both for Theatre for a New Audience; Scott Shepherd (Cry, Trojans!, The Wooster Group’s Troilus & Cressida); and director Daniel Sullivan (The Comedy of Errors, Shakespeare in the Park).

Joining this panel is Tony, Drama Desk and Obie awards to several Emmy nods, John Glover, who stands out as one of our most distinctive actors. While best known for his long-running television series Smallville, Glover’s appearances in a host of stage productions from Love! Valour! Compassion! to Waiting for Godot to this season’s Macbeth at Lincoln Center Theater, remain among his most memorable.

You have an opportunity to be a part of this memorable Drama Desk Spring Luncheon/Panel Discussion, moderated by Carol Rocamora and  focusing on  Shakespeare – “Why Now?.” It takes place at Sardi’s Eugenia Room, 234 West 44th St., on Friday, April 4. It will begin with the luncheon at 11:45 AM, followed by the panel discussion from 1:15–2:30 PM. Tickets—$50 for Drama Desk members and $60 for non-members—may be purchased in advance, online at DramaDesk.org, or directly at https://web.ovationtix.com/trs/pr/932325. To order by phone, call 212-352-3101.