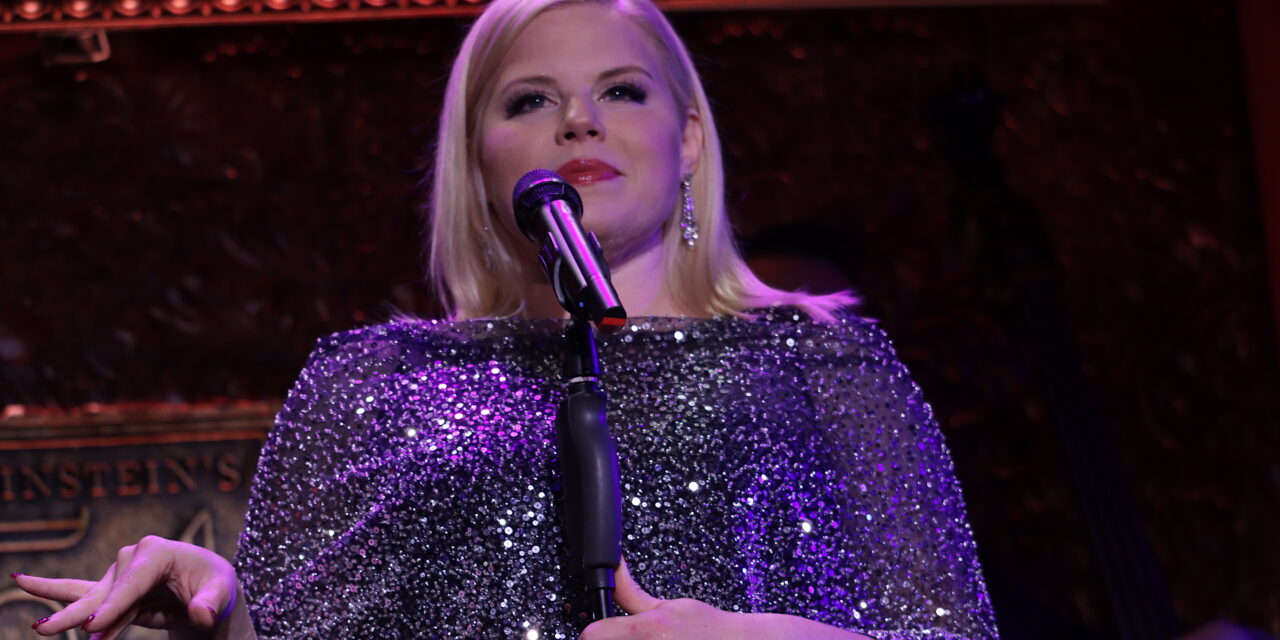 Yes, Megan Hilty knows all the fine points of giving her adoring audience what they crave as she takes the stage at Feinstein’s/54 Below in the Diamond Series to unending applause and shouts before she even opens her mouth!

One of musical theater’s best belters and a show biz icon (at her young & tender age), she was more than eager, after two years of being away (due to that damn pandemic) to sing with her band once again, opening with a Smash special “They Just Keep Moving the Line,” melding into a nice long, perfectly orchestrated medley that includes “There’s No Business Like Show Business (in varying tempos)/Moonshine Lullaby/They Say That Falling Love Is Wonderful/I Got the Sun in the Morning.”

Hilty has the gift of gab and it all seems to fall so naturally from those beautiful lips on that exquisite face as she regales her eager fans with childhood stories like debuting on Broadway right out of Carnegie Mellon onto Broadway and into “Wicked” as Glinda, singing “Popular” in the cutest of baby girl voices to prove it. Between her great acting chops and unique vocal styling, if she hasn’t already grabbed your heart, this will do it! Lest I forget, she is swathed in sparkling glamour silver sequin gown with matching stole.

Married to her guitarist, Brian Gallagher for eight years (2 kids later), she easily talks about her childhood thinking she would one day be an opera star (having gone to “opera camp”), never marry nor have children realizing musical theatre is where she needs to be. Then she meets Brian at Lilly’s Bar in NYC – the man who makes everything better and is always there when she’s in need. And from there, it’s one story after another offering up “What A Guy” (The Goodbye Girl) . . . “he’s the real thing!”  Brian counters singing “Suddenly Seymour (Little Shop of Horrors) as Megan joins in – a love fest.

Megan Hilty’s days on Broadway playing Doralee in “9 to 5” with Dolly Parton (who made fudge for everybody) as a mentor, brought on an endearing twangy “Backwoods Barbie.”

Hilty not only has one of the most expressive song deliveries, but a vocal pattern that is like a roller coaster ride as it moves in and around a song, ebbing-flowing from upper to lower notes seamlessly. Her jazzy inflections on sensitive songs like “Autumn Leaves” paired with “When October Goes” keeps one breathless (and tearful).

Versatility is her style as she delivers Marcy Heisler’s “Alto’s Lament,” that kept the audience in stitches, and talks Smash days and much about Marilyn Monroe also paying homage to the great Marc Shaiman and Scott Wittman.

The 90 minutes of spectacular outpouring of talent also included a pop/swing duet “That’s Life” with pianist Matthew Cusson, aided by Dennis Michael Keefe on bass and Jack DeBoe on drums.

There’s so much more that is part of the Diamond Series (including a spectacular gourmet dinner). But the bottom line is . . . Megan Hilty – you can’t do any better anywhere!