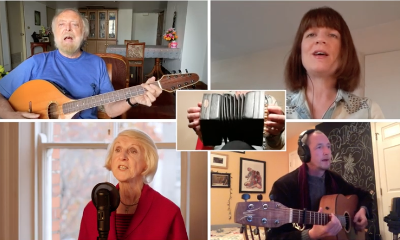 For fifteen weeks, the Irish Arts Center has presented segments of Mick Moloney’s Songbook, curated by Irish musician, musicologist and teacher Moloney, comprised of stories, songs and tunes from Ireland and Irish America. Moloney, who has a doctorate in Folklore and Folklife from the University of Pennsylvania, explored Irish history and culture through traditional music, thematically contextualizing the meaning of each.

Irish traditional music includes many kinds of songs: ballads, laments, drinking songs, political songs and more, mostly dating from the 18th century to modern times. Their purpose is narrative, with lyric having as much, if not more, weight as the melody. Singers of Irish folk tunes will often use a certain amount of melodic freedom and vocal embellishments to tell each musical story. Here are the last six of our installments of the series:

Episode 10: “The Ballad of Tom Crean”

Very recently, the heroic life of Tom Crean, one of the great Arctic explorers of the early 20th century, has come into light to be fully appreciated. Crean’s exploits were diminished in his own time in the early days of the newly independent Irish Republic because he served as a youth in the Royal Navy. Later in life, Crean retired to his native Kerry, where the pub he ran on the Dingle Peninsula––The South Pole Inn––is still in business. Modern-day poet and writer, Cliff Wedgbury, wrote this folk song in tribute to Crean in 2002. It’s sung by Moloney on mandolin, along with Brenda Castles on concertina, John Doyle on guitar and vocals by Lucy Johnston.

Mick Moloney’s greatest mentor was Frank Harte, “a Dublin man through and through,” who helped spur the Irish folk renaissance of the 1960s. Harte specialized in Dublin songs, although his repertoire was extensive; he was a musical historian, as well as a singer-songwriter, with an encyclopedic knowledge of the Irish canon. As a renowned singer of Dublin songs, Harte’s “The Spanish Lady” was written in the traditional style, chock full of Dublin expressions and slang. It’s performed by Moloney on mandolin, with vocals by Brenda Castles on concertina, John Doyle on guitar and Lucy Johnston.

The English, in their long occupation of Ireland, renamed many towns from the original Irish. King Williamstown on the Cork-Kerry border was one such, now known as  Ballydesmond. It’s another fairly contemporary tune, written by emigrant Dannie Buckley who survived the Titanic sinking by posing as a woman. Tragically, Buckley was the last American to be shot and killed in World War !—he had volunteered to serve and fought in the “fighting 69th” regiment. “Sweet King William’s Town” is a nostalgic remembrance of home, sung by Moloney on mandolin, with Haley Richardson on violin.

More contemporary Irish music is featured in this episode with “Murphy Can Never Go Home” by singer-songwriter Mick Curry. The narrative is about those Irish workers who migrated to London to earn money in the construction industry, but who fell into a life of dissolution through drink and rough living. Years pile up until these men become prisoners of circumstance––doomed to end their days far from home. Moloney, who worked in construction one summer as a college student, witnessed this human tragedy firsthand. Singing the song publicly for the first time, Moloney delivers this nonmelodic tune in a quasi-parlando, playing mandolin, with Haley Richardson on violin.

Songwriter, poet and playwright Sigerson Clifford (1913-1985) possessed a great love for Cahersiveen, his hometown on the Iveragh Peninsula in County Kerry. In English, the tune is called “The Boys of the Top of the Street.” The tune is perhaps Clifford’s most famous song, a highly nostalgic remembrance of childhood, particularly for those forced by circumstance to become exiles from their native land. It combines pathos within a fairly up-tempo rhythm and is performed by Moloney on mandolin, Liz Hanley on violin, Brenda Castles on concertina and Michelle Mulcahy on the Irish harp.

The final episode of Mick Moloney’s Songbook is purely instrumental, featuring a spotlight on the banjo and accordion, a defining instrumental duo of the 20th century Irish and Irish American tradition, popularized by the Flanagan Brothers in the 1920s and 30s. One reason this instrumental combination became so popular is because in the era before microphones and amplification, the music could be well-heard, particularly in dance halls. For this episode, Moloney on a vintage banjo, with Billy McComiskey on the button accordion, are joined by keyboardist Matt Mulqueen. The trio play out with energetic, toe-tapping traditional music, Crowley’s Reel (3); the jig, The Road to Lisdoonvarna; and the Providence Reel (also known as Miss McNamara, Oats in the Bag and Rossport Reels).