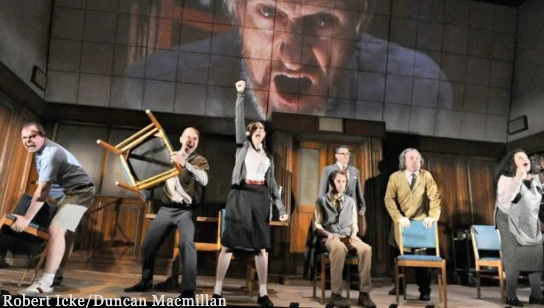 Lots of News Here – Read On!

New York Theatre Workshop will present virtual programming in January, including the 2d Annual Reflections of Native Voices Festival, running Jan. 25 – Feb. 7, along with Doug Wright’s The Wright Stuff, exploring how comedians use humor to speak about today’s most urgent truths. There will be 5 episodes on January 19 on YouTube with Andy Borowitz, Aasif Mandvi, Nancy Giles, Paul Rudnick and Jenny Hagel.A virtual open mic Let Them Hear You will be presented Jan. 28 at 7 pm Free. www.nytw.org

Marisa Tomei and Bobby Cannavale will appear in a streamed reading of Jon Robin Baitz’ Three Hotels January 26 at 8 pm (available thru Jan. 30)as a benefit for BC/EFA Moises Kaufman directs.. www.BroadwayCares.org/threehotels202

Woolly Mammoth Theatre Company in association with IAMA Theatre Company are excited to play “wingman” together as they present Hi, Are You Single?
Writer/performer Ryan J. Haddad has a higher sex drive than you. He also has cerebral palsy. You can often find Ryan on Grindr or at your local inaccessible gay bar. Join him on his search to find love. Or a date. Or at least a hookup. Directed by Laura Savia and Jess McLeod. Streaming Feb. 1 thru Feb. 28. Tix: www.woollymammoth.net

Under the leadership of Founding Artistic Director Jason Eagan and Managing Director Renee Blinkwolt, the first slate of 2021 programming including four new shows curated by director David Mendizábal as part the new Ars Nova Vision Residency program is in the works. All events will take place on Ars Nova Supra, a new streaming platform from Ars Nova that showcases some of New York City’s most promising emerging artists and currently serves as the online home for the majority of Ars Nova presentations.

Designed to foreground Ars Nova’s values through the creation of more equitable and power-sharing curatorial practices, the Vision Residencyexpands Ars Nova’s artistic vision by inviting seven artist-curators to each program one month of events on Ars Nova Supra. Programming can include their own work as well as work by artists they champion and admire, with Ars Nova providing financial and staff resources to develop each piece. In addition to Mendizábal, the 2020-2021 Vision Residents are Starr Busby, nicHi douglas, JJJJJerome Ellis, Raja feather kelly, Jenny Koons, and Rona Siddiqui.

The Cherry Artists’ Collective announces casting for their English-language United States Premiere of Hotel Good Luck, a play with music by celebrated Mexican playwright, Alejandro Ricaño, translated by Jacqueline Bixler and directed by Samuel Buggeln. The play will be live-streamed from the historic State Theater in Ithaca, NY on Friday, February 12 at 7:30pm, Saturday, February 13 at 7:30pm, Thursday, February 18 at 7:30pm, Friday, February 19 at 7:30pm, and Saturday, February 20 at 7:30pm. Tickets ($15 minimum; $25 suggested; $45 supporter) are available for advance purchase at www.thecherry.org. The performance will run approximately 60 minutes, with no intermission.

Hotel Good Luck tells the moving and dizzying story of Bobby, a late-night radio DJ who is confronted with an upsetting event which plunges him into a rabbit hole of parallel universes in an attempt to regain what he has lost.

Future Uncertain for St. Luke’s Theatre as Renovations Begin – The St. Luke’s Theatre owner on West 46 Street, Ed Gaynes, says that he is “not totally sure yet” of what the future use of the space will be. Gaynes explained that several council members have varying ideas of what should be done with the space.

The Kurt Weill Foundation and Lotte Lenya Competition will establish the Rebecca Luker Award for outstanding performance of a selection from the Golden Age of American musical theater by a finalist in the competition.

The second installment of the videoseries Encores! Inside the Revival, featuring a look inside the creative process behind the future Encores! revival of The Tap Dance Kid directed by Tony Award-winning director Kenny Leon has premiered.

In this episode, Dulé Hill delivers a tap performance of “Fabulous Feet” from the 1983 Tony-nominated musical The Tap Dance Kid. Hill (a member of the original Broadway cast) and Leon, along with book adapter Lydia Diamond and choreographer Jared Grimes give audiences a behind-the-scenes look at the production which centers around the life of an upper-middle class Black family and a 10-year-old boy who dreams of being a professional tap dancer despite the challenges posed by his lawyer father and society. All Encores! Inside the Revival episodes stream for free on City Center’s YouTube channel and website at NYCityCenter.org.

NewYork Rep, in association with Rashad V. Chambers and Five Ohm Productions, presents CivilWrights, a ten-minute play series, on Sun. January 17 at 7PM, streaming live at FiveOhm.TV. A response to the national crisis on systemic racism, four playwrights of color have written 10-minute mini plays on racism.  This short play festival, a first in a series, will feature a range of subjects, perspectives and content within BIPOC realities, which explore the current and ongoing political and social climate around all forms of racism. Each series will be followed by a Town Hall style talk-back.