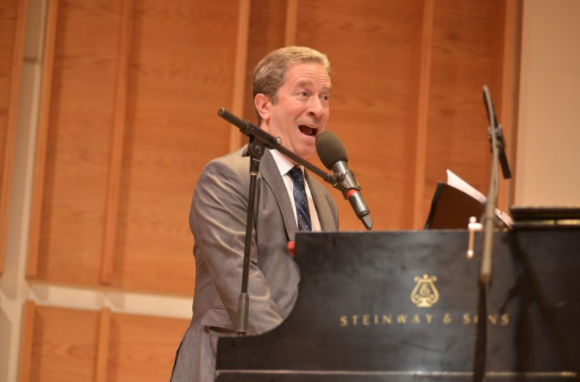 SONGS OF THE DECADE

If you’re connected to theater in any way, then you know Broadway Musicologist, Performer, and Music Director Michael Lavine . Michael is the definitive when it comes to sheet music. He’s got them all, thousands! He’s worked with every Broadway performer during their careers. If you don’t know Michael Lavine, now is a great time to get some knowledge and have some fun.

He’ll take you on an in-depth look at songwriters who wrote songs for radio, film, and Broadway during the 1920s, 1930s and 1940s. Some of these composers grew up in the Lower East Side and oftentimes you can hear the Jewish influence in the writing of these songs. Join Michael for a stroll down memory lane and learn about the songwriters behind the music.

MOMENT MATINEE PRESENTS SONGS OF THE DECADE: THE ROARING TWENTIES

The 1920s was the decade that marked the beginning of the modern music era. There were popular dance bands, jazz musicians, blues musicians, and Broadway stars like Eddie Cantor, Al Jolson, Sophie Tucker and Fannie Brice. Popular musicians included George Gershwin, Paul Whiteman and Louis Armstrong. Speakeasies allowed patrons to learn the latest dance craze. Join us as we take you on a whirlwind tour of this exciting time period with songs that people are still singing 100 years later!  Fee – Register

MOMENT MATINEE PRESENTS SONGS OF THE DECADE: THE ENTHRALLING THIRTIES

The 1930s was shaped by the contrasting moods of the Great Depression and the glamorous beginnings of Old Hollywood.  Jazz, swing, and big band evolved and became more prominent.  Many film stars were also popular singers of the time.  Broadway writers moved to Hollywood, adapting their Broadway stage shows for the silver screen and creating new films.  The radio program “Your Hit Parade” debuted, showcasing the most popular songs of the week.  Some of the most famous singers of the 30’s were Fred Astaire, Ginger Rogers, Ethel Merman and Betty Grable.  Crooning was the rage, with singers like Bing Crosby and Rudy Vallee leading the pack.  We’ll bring you some of the most-loved songs of this decade and discuss why it was full of fascinating contradictions.  Fee – Register

MOMENT MATINEE PRESENTS SONGS OF THE DECADE: THE FABULOUS FORTIES

The 1940s was punctuated by World War II.  Musically, big band and jazz were the prevalent styles, and artists like Rosemary Clooney, Count Basie and Artie Shaw helped define the era.  Despite the war occupying people’s attention for half the decade, much of the music was upbeat and positive about the impending future after the war had ended.  We’ll explore the varied musical styles and the most popular entertainers of the decade, including Judy Garland, Bob Hope, and Lucille Ball.  Like the 20’s and 30’s, many songs of the 1940’s are still being sung today.