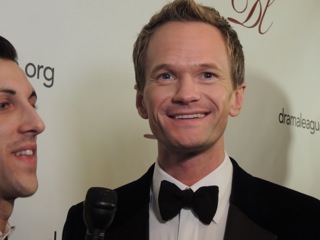 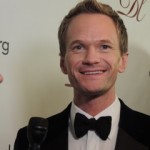 Monday, February 3 turned out to be quite a momentous day for Emmy-winning actor Neil Patrick Harris. In the morning, he began rehearsals for his upcoming Broadway musical “Hedwig and the Angry Inch,”and just hours later, Harris dashed off to the Pierre Hotel where dozens of his celebrity friends (and hundreds of supporters) came out to honor him at the Drama League’s “30th Annual Celebration of Broadway.”

Harris was feted with a 75-minute variety show, which began with TV and Broadway star Zachary Levi dazzling the crowd with the parody number “Be A Guest.” Among the many entertainment highlights were Broadway’s James Barbour and Lawrence Clayton duetting on “Bring Him Home” (from “Les Miserables,” the first Broadway show that Harris ever saw), Norm Lewis’ joyous rendition of “I’ve Got Plenty of Nuttin’”, five-time Tony winner Audra McDonald’s crowd-pleasing “Can’t Stop Talkin’ About Him,” and a dozen alumni of the show “Rent” singing a rousing “Seasons of Love.”

Not surprisingly, many of the show’s selections and appearances were related to Stephen Sondheim’s “Company,” in which Harris starred at Lincoln Center. Co-star Stephen Colbert brought the house down with his speech (well, speeches) about Harris; Chryssie Whitehead, Paige Price, and Erin Davie sang “You Could Drive a Person Crazy” (dedicated to Harris’ TV alter-ego Barney Stimson); Cady Huffman, Eddie Korbich, Krysta Rodriguez, and Malcolm Gets performed a special version of “Side by Side”; Katie Finneran’s hilarious take on “Getting Married Today”; and Harris’ other half, David Burtka, surprised his partner by getting on stage to belt a heartfelt “Marry Me a Little” after explaining that the couple hadn’t tied the knot yet only because they haven’t found the time.

Before presenting a clearly overwhelmed Harris with the award, McDonald returned to the stage to perform the “Wrap-Up Rap,” recapping the evening’s show. (The rap was in tribute to her work with Harris at last year’s Tony Awards.)  It was a most fitting finale to this always worthy and wonderful event.