Now in its seventh year, Ars Nova’s annual celebration of All New Talent is a prime destination for an eclectic mix of brand new shows across disciplines and has proven to be an important first step in the lifecycle and development of new works. Through its open submission process, ANT Fest offers a wide range of early career artists a point of entry onto the Ars Nova stage as well as into the greater New York City arts community. This year’s call for submissions drew nearly 300 applicants.

Showgasm begins at 9:00pm on June 5 and 19 (immediately following ANT Fest shows on those evenings). Tickets are $5 and may be purchased at www.arsnovanyc.com, (212) 352-3101, or at the Ars Nova Box Office (30 minutes before showtime, subject to availability).

The Silo is closing, and we need your help! Wander through a failed research facility and find yourself face-to-face with its quarantined patients in this interactive, science fiction adventure whose outcome is determined by the mysteries you uncover.

Charismatic solo performer Ike Ufomadu – aka: the son that Woody Allen and Frank Sinatra never had – blurs the line between real life and variety show in this evening of comedy and music entertainment.

Tired of boring, old, meaningless theater? So are Skylar and Simon, two college guys on a mission to make theatre so important that it changes the world! This mockumentary exposes the amusing realities lurking beneath artistic idealism. When the orange Cheeto dust clears, will anyone be safe?

Nine Streeps. One house. This reality show send-up follows nine Meryl Streep characters competing for the chance to rewrite their narrative. Watch what happens when these ladies stop being polite and start getting Meryl. 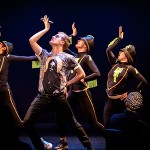 It’s 1863, and five badass women ditch their petticoats and dress as men to fight in the Civil War. This adrenaline-fueled portrait of five real women blends drama, dance and pop music to chronicle a chapter of American history that’s not in any textbook.

Desperate to win popularity and dates, two teenage misfits try to adapt Alfred Noyes’ century-old poem ‘The Highwayman” into a garage-rock-opera. It’s going to be a disaster. In the miserable crucible that is American High School, two fearsome artists are born.

Storyteller and playwright Peter Gil-Sheridan can’t help it. People tell him things. All kinds of hilarious, tragic and stupid things. And now he’s telling you. So grab a drink and have a listen. It’ll only hurt a little.

Jeff and Buttons are putting on a vaudeville show, even though they have no clue what vaudeville is! This two-man comedy duo is like Laurel and Hardy on a bender with the Marx Brothers, drunk dialing Beckett.

With influences ranging from bluegrass to pop, rising New York band The Lobbyists combine their folk rooted sound with modern storytelling, inspired by classic nautical lit, for this concert version of their full-on ghostly experience. Oh and there’s a Leviathan!

A coven of six Lena Dunhams are holed up in a Brooklyn loft, enacting the daily rituals of extreme millennial self-dramatization. As success weighs heavier and heavier on them, can the Lenas retain their individuality and avoid becoming the ultimate cliché?

What happens when Hank Williams, The Andrews Sisters, and Beyoncé have a sleepover? An evening of boogie-woogie country-western, tight swing harmonies, and torch-tales of lovers lost from the sultry, sweet Shirtwaist Sisters.

Monday, June 16 at 7:00
Condolences from the Future!
Written & Directed by Chris Barlow
Music by Eric Littmann

A collision of past and present! Radio play and stage play! Foley audio and futuristic technology! Join Margaret and her sidekick Clyde, the Last Unicorn on Earth, as they attempt to save time itself in this live-action radio-play odyssey.

Enter Eric’s hallucinogenic dreams, where the desires of life meet death in a bluesy musical explosion. This rock n’ roll hybrid explores the meaning and certainty of knowing: You. Are. Gonna. Die.

Inspired by a series of journalistic revelations about life in and around the Bakken oil fields of North Dakota, this vibrant, folk song cycle questions what it means to face reality in the latest iteration of the American Dream.

Thursday, June 19 at 7:00
Daniel Koren: The Most Important Thing
Created by Daniel Koren

A composer’s stream of consciousness is on full display in this bizarre and visually electric show at the intersection of virtuosic piano, trippy projections, floating heads and eccentric commentary.

A pair of middle school teachers set off into treacherous territory with their controversial take on living history. The audience becomes their students in this darkly comic meditation on how the past continues to infect our present.

Saturday, June 21 at 7:00
This Changes
Written & Directed by Matt Gehring

What’s the life of a comic character after the joke lands? What’s it like when Target Lady or Two Wild and Crazy Guys face a death in the family? This sketch show explores comic characters beyond their punchlines in a show full of funny and just a little bit of tenderness.

We’re doing the most important pitch of our lives and you’re invited to our trial run! If you like STARS, ITALIANS, EVIL CORPORATIONS, CHASE SCENES, EMOTIONAL GUT-PUNCHES, STARS, SURPRISE ENDINGS, and STARS, you should definitely come. This presentation/show will explode the intersection of theater and film while telling you the best-animated story ever pitched.

Who run the world? GIRLS. This live concert is a feminine fistfight between the power of pop music and all its weird messages about body image, gender roles, freakum dresses and genies in bottles.

Wednesday, June 25 at 7:00
Stompcat in Lawndale
Created by Mark Sonnenblick & Will Moritz

Your old classmates Will and Mark were asked to play your 5-year high school reunion. What the planning committee doesn’t know is that they’ve joined a cult that worships a mystical cardboard cat. Come dance and chant to the explosive, electro-disco-dance music at this high-energy concert/reunion experience!

A glam-rock adaptation of Euripides’ Cyclops, featuring The Satyrs, a rock band of shirtless goat men, a flesh-hungry Cyclops with a penchant for singing about the one who got away, and Odysseus, a ukulele-toting soldier just trying to get home.

Paying tribute to one of America’s most important second-bests, this folk-punk song cycle/puppet-show/history lesson explores the imagined jealousy and disappointment of Buzz Aldrin, the second astronaut to walk on the moon.

Tickets may be purchased at www.arsnovanyc.com, (212) 352-3101,
or at the Ars Nova Box Office, 30 minutes before showtime (subject to availability).