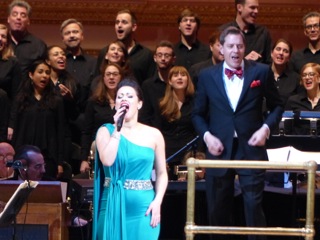 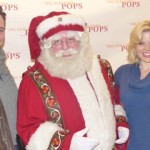 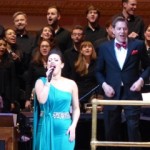 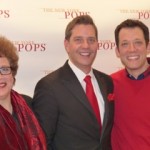 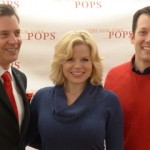 With the New York Pops Conductor Steve Reineke at the helm, the traditional Christmas songs were given a new life.  The evening was filled with carols, movie music, radio hits, each one capturing the magic of the season. The Pops were joined on stage by Essential Voices USA, under the direction of Judith Clurman. The chorus was a wonderful addition to the evening. With their rich sound the evening opened with “Deck the Halls” and John Williams’ “Merry Christmas, Merry Christmas.”

Ashley Brown took the stage and set the mood with “It’s the Most Wonderful Time of the Year.” Her warmth and charm welcomed the audience to a magical evening. Best known for originating the title role on Broadway as Mary Poppins, not only can Ms. Brown sing soprano standards but she demonstrated her pop qualities singing Mariah Carey’s pop favorite  “All I want for Christmas is You.”  The highlight of the evening was Ms. Brown inviting the children in the audience to join her on stage as she sang Wesley Whatley/Bill Schermerhorn’s “Yes, Virginia,” based on a little girl’s letter to a newspaper wanting to know if there is really a Santa Claus. This song is on it’s way to becoming a staple for the holiday season.

At the close of the evening, the audience joined in on a Christmas Sing-Along. Thanks to the New York Pops, the Season is in full swing.

The Saturday matinee featured “Charlie Brown Christmas” based on the annual TV special.  The opening number  “Christmas Time is Here” is a jazzy Christmas tune composed by Vince Guaraldi with lyrics by Lee Mendelson. Jon Tartaglia narrated the story with dance choreographed by Liza Gennaro. Joining the New York Pops on stage were child actors from TADA! Youth Theater  and dancers from the New York Theater Ballet.  The sold out performance was filled with many parents and their children who were so excited by Santa Claus’s appearance at the end of the show.