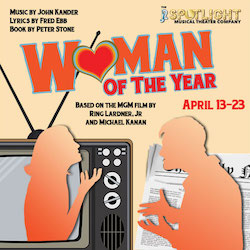 J2 Spotlight Musical Theater Company (Jim Jimirro, Executive Producer/Co-Founder; Robert W. Schneider, Artistic Director/Co-Founder) announces the exciting three-musical lineup for its highly anticipated third season. The 2023 season, running April 13 through May 21, 2023 at Theatre Row (410 West 42nd Street – between 9th and Dyer Avenues), will include Woman of the Year, Sugar, and The Goodbye Girl. Creative teams and casting for the 2023 season will be announced in the coming weeks. Subscriptions for all three shows with a 25% discount are now on sale and single tickets will go on sale starting Tuesday, January 24, 2023. www.J2SpotlightNYC.com

Mint Theater Company (Jonathan Bank, Producing Artistic Director) will return to New York City Center Stage II with the World Premiere of one of its most exciting discoveries ever: Becomes a Woman, an unpublished and unproduced play by Betty Smith (A Tree Grows in Brooklyn). Smith’s 1930 never-before-seen drama will run from February 7th through March 18th at NY City Center Stage II, directed by Britt Berke. Opening Night is set for Monday February 27th (7pm). www.MintTheater.org

RockefellerProductions announced today that their acclaimed production of The Very Hungry Caterpillar Show will begin performances off-Broadway on February 10, 2023. Opening night will be February 27, 2023. Performances will take place at the DR2 Theatre, 101 East 15th Street in Union Square. For all information go to hungrycaterpillarshow.com.

Created and directed by Jonathan Rockefeller, the show has performed over 2000 shows worldwide including sold out shows in Australia, New Zealand, China, Singapore, Dubai, Belgium, United Kingdom, Canada, Luxemburg, Netherlands and in New York City. This engagement will mark The Very Hungry Caterpillar’s return to New York at the DR2 Theatre, and the start of a national tour.