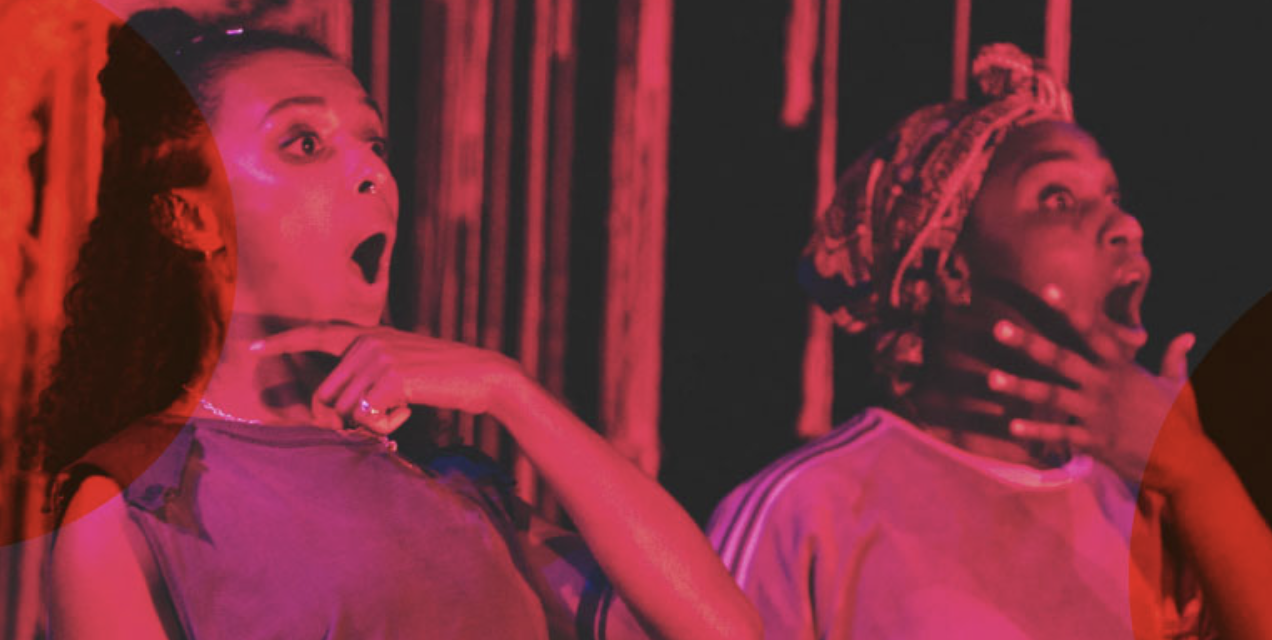 Perhaps no recent play explodes with chaotic, rapid-fire language interspersed with virtual memes more imaginatively and vigorously than the brilliant Seven Methods of Killing Kylie Jenner by Jasmine Lee-Jones, currently running at the Public Theater until Sunday, January 22. Presented by the Royal Court Theatre in association with Wooly Mammoth Theatre Company, Seven Methods of Killing Kylie Jenner is part of the Public’s annual Under the Radar festival.

The play, directed by Milli Bhatia is audacious, hysterical, confounding, original and profound. Additionally, the superbly energetic performances by Tia Bannon and Leanne Henlon and the unique stylization by the creative team make this a must-see production.

Careening between real life and virtuality, Jasmine Lee-Jones’ ferociously humorous and sardonic 90-minute one-act play raises vital questions about issues of queerness, friendship, white supremacy, cultural appropriation, and the ownership of Black bodies online and IRL (in real life). Importantly, Jones intimates current themes as she explores the arguments between friends Cleo (Leanne Henlon) and Kara (Tia Bannon) and uncovers the deep-seated wounds beneath their “fronting” as they get caught up in social media as a means of escape. The more they become overwhelmed by their viral world, the more it backfires and complicates their feelings until they find the way toward reconciliation.

The playwright satirizes the internet meme culture and postulates that life’s vitality should not be occluded by social media companies seeking profits via algorithms designed to emotionally engage to enrage. Though this is a concept we all understand, the actors, playwright and director’s vision, enhanced by the creative team, actualizes and physicalizes the themes with acute precision.

At the top of the play, the stylization emphasizing the title is presented. By the conclusion, we understand. In darkness Kara and Cleo nefariously appear to drag a body swaddled in white cloth or another material used in the design of the play. They dump the “body” down a hole (in the trap). The prologue ends and leaves us with questions about what just happened.

Then the virtual world arises with sounds and lighting effects. Cleo rampages on Twitter about the Forbes Magazine article that identified born-rich media personality Kylie Jenner as a “self-made” billionaire. Cleo identifies the cultural appropriation by white women like Jenner, who co-opt and profit from Black culture. Cleo receives support from her fans as she questions how Jenner is “self-made.”

Overcome with the emotionalism spurred on by social media responses, Cleo tweets joking death threats about Jenner (throughout the play she lists various ways to kill Jenner). Meanwhile, Kara attempts to get her to stop rage-tweeting, clear her head and return to reality. As the argument goes back and forth, we appreciate Jones’ edgy dialogue and humor using “social media speak.”

Cleo’s accusations about the injustices the culture levels toward Black women, in comparison with the treatment it levels on white women, are solid and damning. One example relates to Kara. Because she is more light-skinned, Kara doesn’t quite acknowledge the discrimination the darker-skinned Cleo feels. Clearly, these are points they never considered, and the raging tweets and memes have brought them to the fore.

However, as the play unspools, we understand. The huge, white mass of strings tangled like interconnected wires, pendulous at the back of the playing area, coupled with sound and lighting effects, symbolizes the internet and its explosive effect on the characters. As they spew out their memes and act out GIFs, the lighting and sound effects appear to consume and transform Kara and Cleo into other personalities. When the sound stops and regular lighting comes on, we realize they’re back in real life.

But virtuality has a way of rocking into the real world. Cleo and Kara’s relationship bends and nearly breaks when their anger toward each other spills out. Their inclusion of memes, GIFs, emojis and internet lingo as a natural part of their conversation is sometimes confounding (even to them!) as they become caught up in the toxic virality. The online reaction to Cleo’s tweets about methods of murder converts into nihilism, racist insults, offensive cultural tropes and rape threats. This viral poison increases, proving that the virtual world is a dangerous and portentously “real” place. What if an anonymous caller attempts to make good on his threats against Cleo IRL (in real life)?

Eventually, the two friends’ arguments unearth wounds from the past and throw off the memes and “personalities” encouraged by social media anonymity, where anything can be said and the individual saying it is not held accountable. It is in the moments when Bannon’s Kara and Henlon’s Cleo quietly share how they were disloyal and hurt one another that Bannon and Henlon are most engaging and powerful.

Jones’ brilliant examination of social media underscores the ever-present dichotomy of how it may be used for good or ill. It offers the opportunity for constructive conversation; however, that may turn in the blink of an eye into caustic death threats. Often boundaries are exceeded from humor into damaging venom. Social media offers an occasion for isolated, underrepresented voices to be heard; but, how do they speak? With humanity . . . or misanthropy via anonymity?

This is one you don’t want to miss.

Seven Methods of Killing Kylie Jenner. Through January 22 as part of the Under the Radar Festival at The Public Theater (425 Lafayette Street, at Astor Place in Greenwich Village). www.publictheater.org