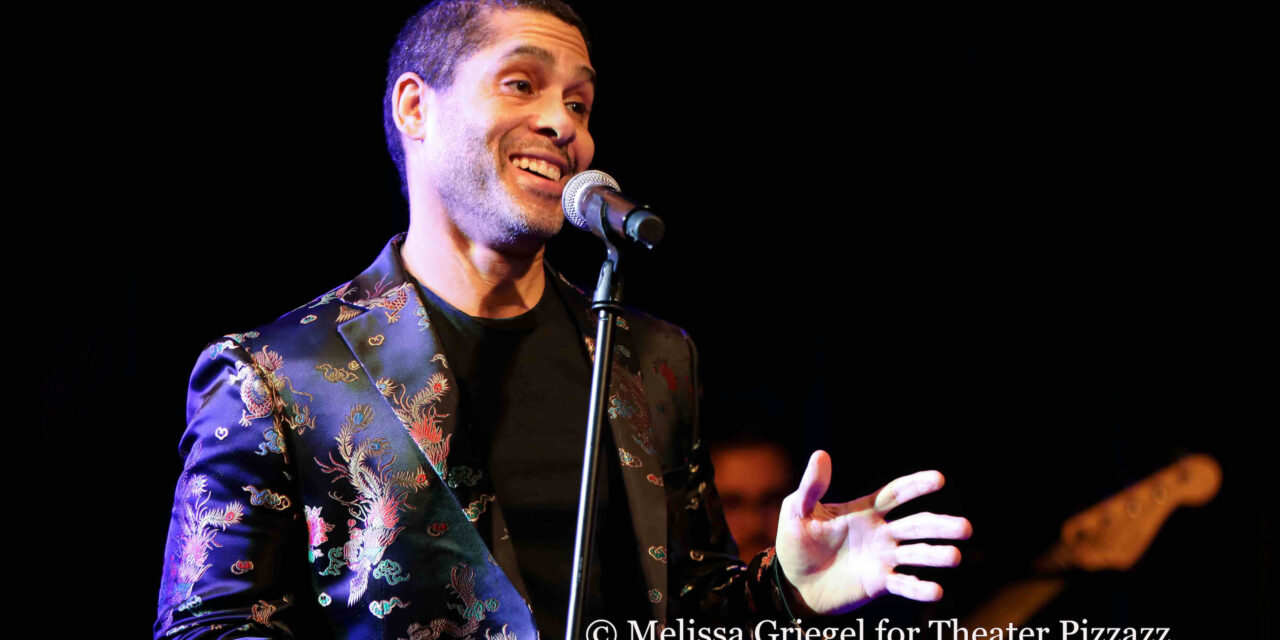 Wilson Jermaine Heredia rose to fame for his portrayal of Angel Dumott Schunard in Rent, a role that garnered him both the Tony Award and the Drama Desk Award for Best Featured Actor in a Musical. He also originated the role in the West End and played Angel in the 2005 film adaption. Heredia went on to act in television and movies and made a return to the Broadway stage in 2011 as Jacob in La Cage aux Folles. Despite being known for playing roles that required him to wear makeup and dress in heels, Heredia is very different in person. His natural speaking and singing voice is much deeper than many of the characters he has played, and he has a very down-to-earth personality. He also proudly announced that he and his wife are expecting their first child in about a week and got choked up talking about how excited he is to meet his daughter. Heredia performed his solo show at Chelsea Table + Stage (100 West 26th Street) on January 19th, 2023.

His set list ranged from Broadway to rock to original music. While living in San Francisco, Heredia starred in Camelot at the San Francisco Playhouse as Sir Lancelot, and Pasko in Berkeley Playhouse’s production of A Little Princess. He began the show with “C’est Moi” from Camelot and sang “Captain Crewe” from A Little Princess. Heredia opened up about the sometimes painful process of auditioning for roles, and the disappointment of the lack of representation of People of Color in mainstream theater until recently. He auditioned several times unsuccessfully for Evita, and sang “High Flying, Adored” from the show. He also talked about wanting to be Tony in West Side Story but kept getting asked to be Chino or Bernardo. He eventually was able to play Tony in a production and shared his rendition of “Something’s Coming” with his own “flava”.

Realizing that much of the audience still thinks of him as Angel, he talked about the audition process for Rent, and sang his audition song “Great Balls of Fire,” made famous by Jerry Lee Lewis and The Rocky Horror Picture Show, along with three songs from Rent: “I’ll Cover You,” “Seasons of Love,” “Today for You.” He told the audience, “See, I had to put on my ‘Angel’ voice to do that. Another reason I wanted to do this show is that I think people assume that that is the only way I sang and that was my voice. No—that’s a character voice!” He also sang “Why” from the recent movie tick, tick…Boom! based on Jonathan Larson’s musical of the same name. He shared, “Luckily, I had a little cameo in that film. I like to introduce this song because, number one, it makes feel close to Jonathan Larson and his play, and it also reminds me that sometimes things are rough in the industry or life in general, and this song kind of brings me back to center and I love it for that. It’s everything in an artist’s life that we have to remind ourselves of why we do it.”

A big hit of the night was The Stone Temple Pilots’ song “Plush.” “I was in a couple of bands,” Heredia said. “Back in the day, around 1996, when I was in Rent, I was in the alleyway in the back of the theater, and I am listening to Core with my yellow waterproof Sony Walkman. On the way into the stage door, who do I see crouched down smoking a cigarette—Scott Wylen! And I look at him and I go, ‘Dude! I’m about to do a show but check out what I was listening to (and shows him the Walkman)! I’ll catch you later.’ And I walk back inside. It just goes to show you how the universe conspires to put things and people together.”

My favorite piece of the evening was Heredia’s original song “Little Boy Blue.” Of the song, Heredia said he feels like he didn’t even write the song, that it just came to him. “I was in the shower, and all of a sudden it was like boom! The song just hit me all at once. I ran out of the shower and I got on my guitar and I composed the song in about an hour. The words came to me; the chords came to me; the everything came to me, almost instantly. That’s why I say I didn’t write it; I was just the vessel.” I would like Heredia to channel more of this, as I would definitely enjoy listening to more of his original music.

To the absolute delight of everyone at Chelsea Table + Stage, Heredia called good friend Orfeh on stage to sing a duet of “Careless Whisper” with him. He introduced “The incredible, incredible, beautiful, ridiculously talented, ‘no-shade Orfeh’. Orfeh and I met in 1997 while we were doing a show called Queen the Musical. We clicked immediately and she became my sister for life.” It was such a delight to watch the two of them have fun singing together and grooving to the music.

After the show, I got to chat with Heredia at the rooftop bar above Chelsea Table + Stage called Sandbar Rooftop and ask him about what he is doing next. “Currently I am working on a musical workshop called Infernal. It’s sort of like Alice in Wonderland traveling through the nine circles of hell. I play Lust, one of the seven deadly sins.” In addition, the Brooklyn-born artist is working on his own project Surviving Williamsburg. “It’s a project I first thought about 12 years ago when I was in La Cage aux Folles. The working name was “A Fine Life in Heels” for obvious reasons. After years of notes on index cards and brainstorming with trusted friends, it occurred to me that the real “meat” of my story was actually the journey of where I came from before I was on a Broadway stage. It’s the story of growing up in an area where I was not expected to survive my twenties, to end up receiving the highest honors in theater. And a story of physical, emotional, and psychological survival—along with singing and dancing! The irony is that in 1996, Williamsburg, Brooklyn was a place I couldn’t leave fast enough. Now I couldn’t afford it if I wanted to go back.” Heredia had a few tables of friends at the show that grew up with him in Williamsburg and were so proud to see him on stage and revel in his success. I am looking forward to the day when I could see a completed version of Surviving Williamsburg.

Chelsea Table + Stage is a terrific new hotspot with state-of-the-art sound and lighting, fabulous food with a constantly changing menu, and emerging artists to Broadway performers. Check out their line-up on www.chelseatableandstage.com.