‘Ohio State Murders’ Comes to Broadway Not a Moment Too Soon 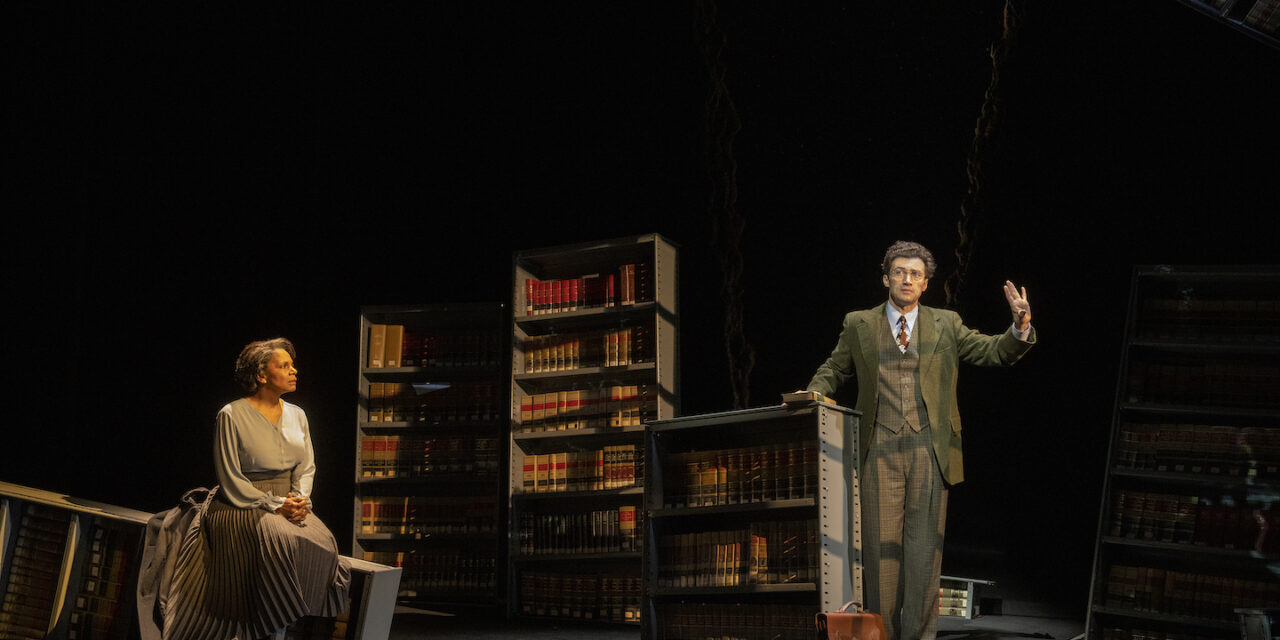 It has taken till now for ninety-one-year-old playwright Adrienne Kennedy to finally have one of her plays open on Broadway. The recipient of an Lifetime Achievement Obie Award for her off-Broadway work and a member of the Theater Hall of Fame, among other honors—this groundbreaking black female playwright’s 2007 drama Ohio State Murders opened last night at the newly christened James Earl Jones Theatre (formerly the Cort Theatre). It is more than appropriate that the premiere production of the first Broadway theater named for a black artist should be a play by another black artist. To add further significance, it stars top caliber actress Audra McDonald, who gives one of the year’s finest performances. Directed with a sure hand by the estimable Kenny Leon, this is theater that demands to be seen.

The curtain is up when you enter the Jones Theatre, revealing a series of heavily loaded bookcases strewn about at different angles, some hanging in mid-air, floating above the stage, courtesy of Beowulf Boritt’s arresting design. We hear the voice of an older woman, chronicling her life in a recorded interview (which in the Playbill is revealed to be the actual voice of playwright Kennedy). The lead character, Suzanne Alexander (Audra McDonald), is a stand-in for Kennedy (as she was for the lead in four plays other play penned by the author). So, it’s not a great surprise when McDonald begins the show using a similar cadence and pitch to the voice we first hear filling the theater upon our arrival.

Ohio State Murders is book-ended by a lecture that Suzanne is giving at Ohio State University, which she once attended. Her story is slowly revealed in flashbacks. The action maintains an equitable balance over time, with Suzanne its central figure and narrator. Originally written for two actresses, younger and older, which is altered by the casting of the ageless McDonald, who plays both iterations. Extremely bright and capable when we first meet her as a freshman on the Columbus campus in 1949, Suzanne is marginalized at every turn because of the color of her skin. One professor, Robert Hampshire (Bryce Pinkham) finds her fascinating, but isn’t capable of helping her find her place since he won’t acknowledge the problem—which consequently exacerbates it. Eventually, and mostly offstage, these two characters share a destiny that is the crux of the murders that come into play. That’s not a spoiler—it’s in the title.

Those books surrounding Suzanne wherever she goes are indeed a heavy weight, literally and metaphorically. Her promise of greatness is cut short, not only by institutional racism, but by her being a trustworthy soul, one who doesn’t understand (yet) the darkness in people’s souls. Tragedy seems to be a constant companion, such as when her roommate, Iris Ann (Abigail Stephenson), has a mental breakdown over a failed relationship, or when Suzanne is spied upon so that an unenlightened administration might find reasons to force her out of school. A literal crack in the upstage wall allows us to view snow falling through nearly all of the seventy-five minute running time, lending a palpable chill to the proceedings.

McDonald uses her enchanting speaking voice, concentrating on hitting consonants hard and elongating vowels, almost hypnotizing us in near-constant narration. She never leaves the stage, managing the task of staying commanding and remaining vulnerable at all times. Her interactions with the entire cast are direct, sincere and nuanced. No star turn here. In a difficult role, Bryce Pinkham’s professor is a knot of coiled tension who successfully navigates the character’s surprising arc. In a brief role, Abigail Stephenson brings an openness and frailty to Iris Ann that makes an impact. Lizan Mitchell adds a distinctive grace playing three parts, and Mister Fitzgerald playing two, is quietly effective.

High praise for Leon’s sensitive direction and for the creative set he and scenic designer Boritt have devised. The costumes by Dede Ayite inform character as well aid in depicting the late forties and early fifties. Lighting by Allen Lee Hughes is evocative as is the sound design by Justin Ellington (the use of period music, uncredited in the program, is excellent).

There’s great poetry in Kennedy’s writing. She manages to weave literature (Thomas Hardy), music (the Golden Age of Broadway), film (Serge Eisenstein’s Battleship Potemkin) and other crucial twentieth century art forms throughout the play. Motifs and metaphors are handled with a light touch and ease you along so that you are unprepared when a certain heaviness creeps in, not smashing you over the head, but seeping into your skin.

For those with access, a recent interview with the nonagenarian Kennedy in the New York Times is well worth reading. No shrinking violet, it’s important to note that many of her plays use violence in a way that still holds the power to shock. And though she is finally getting her due on the pejoratively termed Great White Way, Kennedy never let her voice be diminished. In a rich career, she has taught at Harvard University and University of California at Berkeley and was awarded a Gold Medal for Drama from the American Academy of Arts and Letters. If Ohio State Murders helps create a renascence for her in her lifetime, then the power of the arts will, as ever, be doing its right and proper job.