The Sound of Music at Paper Mill Playhouse 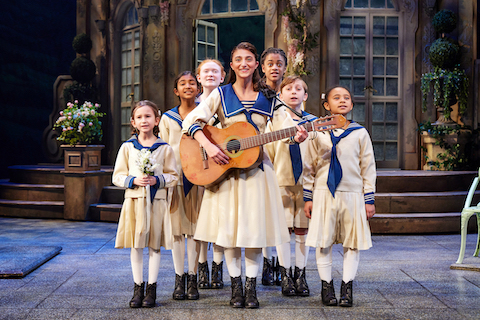 The infamous story—based on real people and events—follows the remarkable journey of Maria Rainer (Ashley Blanchet), a restless postulant at Nonberg Abbey in Salzburg, Austria, soon forced to navigate a changing world outside the convent walls.

It is 1938, and as the oncoming German threat looms in the near distance, Maria is reassigned by Reverend Mother Abbess (Caitlin Burke) to become the new governess for stoic Naval Captain Georg von Trapp (Graham Rowat).  A widower who seems to have lost any sense of joy, the oft-cold Captain runs his household with a strict, stern demeanor, whistling for children and staff as if in command of one of his previous ocean vessels.

Initially intimidated by the assignment, Maria quickly takes to the role of looking after the children, whom she adores immediately. The children—who previously hated and tortured every nanny they’ve had before— warm-up to Maria just as fast.  She teaches them how to sing; gives them shelter from the sounds of loud thunder via a song about a yodeling goat herder; and she makes them clothes out of former curtains.

As predictable as any rom-com, at first, Captain von Trapp and Maria seem to butt heads on almost everything—from his use of whistles to summon people to the way he treats his own children who, in her words, “just want to be loved.” The Captain quickly realizes Maria’s real value not only to his children and household but also to himself and soon becomes emotionally involved.  They must now flee the Nazis through the mountains.

Blanchet is effervescent and charming.  She sings beautifully and radiates a nuclear-level charisma making it easy for everyone in the show and audience to be enchanted.  The production is ripe with bravissimo fun amid “Do Re Mi” and “The Lonely Goatherd.”

As the eldest Van Trapp, Analise Scarpaci is graceful and a lovely singer.  She captures the blush of first flirtation and the tightrope of adolescence perfectly.  The other Van Trapps are equally cute and pert especially Charlotte Sydney Harrington as the youngest, Gretl. Rowat is effectively brusque with a slow warming for Maria’s inherent charm. As Max, Gavin Lee provides a rich unctuousness totally appropriate for the character. One can see him mentally twisting a dastardly mustache of machination.

As wholesome and square as it can very often feel, Sound of Music obtains rich, new vibrancy in Director Mark S. Hobee’s hands.  This is an especially well-sung production with soaring harmonies and lush musicality.  Music Director and Conductor Meghann Zervoulis Bate does a spectacular job with both the orchestra and singing.

The strength of this production lies, as it should, in Maria and the children. But all the numbers choreographed by Kenny Ingram, pop with life, honesty and pizazz, delighting the audience at the Paper Mill, which was grinning in the semi-darkness. This is a great Sound of Music to enjoy with a kid, introducing them to the glory of stage musicals.

The production plays through January 1.  Tickets and more information at papermill.org