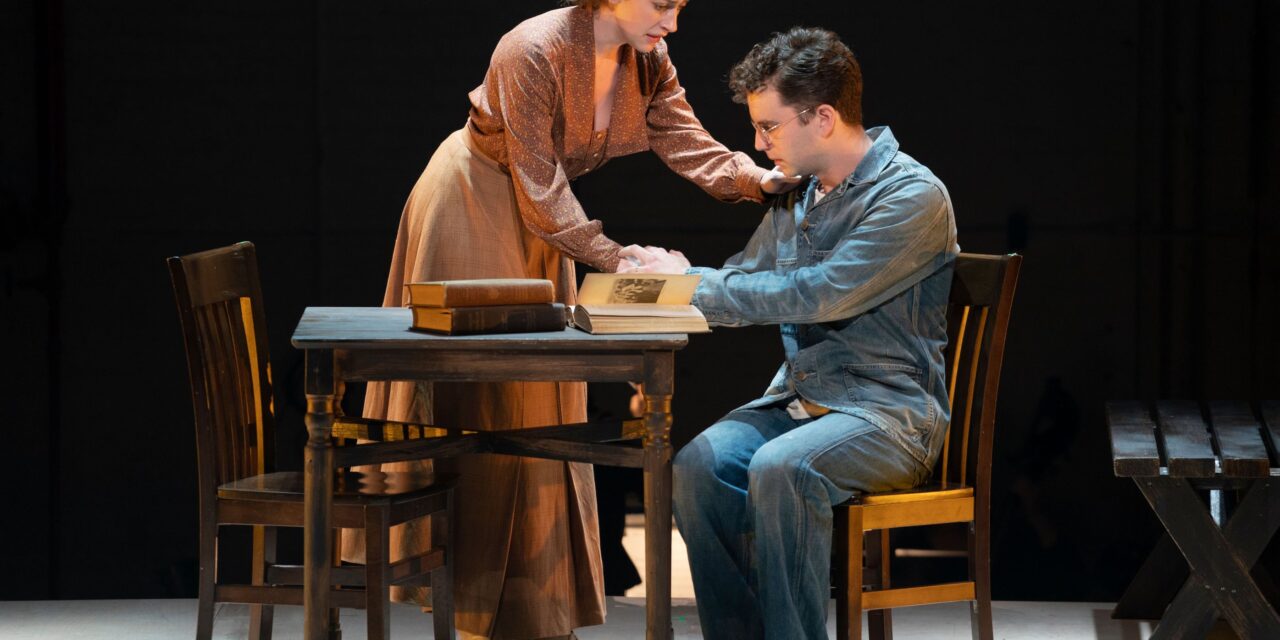 “Did you hear they are now targeting synagogues in New Jersey this weekend,” a friend remarked just as I was about to head to New York City Center for their week-long presentation of Jason Robert Brown and Alfred Uhry’s Parade. As a Jew, I didn’t really need to be reminded of the antisemitism rapidly sweeping this country again, but watching “Parade,” would have been more than enough to make me take heed of the notion that those who don’t remember the past are condemned to repeat it.

Take note, though: Parade is not just the timeliest show in town, it’s one of the most theatrically satisfying. It is brilliantly staged by Michael Arden — with the action mostly staged on a raised box and projections to give us much-needed information on time and place — and exquisitely acted and sung by over two dozen of our finest actors, led by Ben Platt and Micaela Diamond, Let’s hope rumors of a Broadway transfer (especially with this cast intact) become a reality.

First presented on Broadway in 1998, Parade uses the true story of Leo Frank (Platt, in exquisite voice) as its focal point. A New York Jew, somewhat bookish and remote, Leo lives in Marietta, Georgia with his seemingly mousy wife Lucille (the aptly named Diamond) and almost takes perverse pride in how he refuses to adapt to Southern mores.

When a teenage girl Mary Phagan (Erin Rose Doyle) is found dead in the pencil factory Leo supervises – and where he was working on Confederate Memorial Day — he is immediately named as the prime suspect. Despite little more than circumstantial evidence, no effort is left unturned to convict him or to use his plight for other ends, including the ambitions of religious newspaperman Tom Watson (a chilling Manoel Felciano), an overeager reporter (a sublime Jay Armstrong Johnson), and, above all, sleazy prosecutor Hugh Dorsey (a pitch-perfect Paul Alexander Nolan)

In a stunning sequence that takes up much of the first act, we see how Dorsey “twists” the recollections of everyone from the Franks’ African-American maid Minnie (Danielle Lee Graves) and factory janitor Joe Conley (a scene-stealing Alex Joseph Grayson) to Mary’s impressionable young friend Frankie Epps (an excellent Gaten Matarazzo). And when Mary’s distraught mother (an affecting Erin Mackey) yells “Jew” at the end of her testimony, it cuts through us like a knife.

The show’s second act has a double focus: the efforts of Georgia governor Jack Slaton (a superb Sean Alan Krill) — egged on by Lucille — to reverse Leo’s conviction, and the evolving relationship of the Franks while Leo is in prison. Of course, since we know the eventual ending, there’s a slight lack of dramatic tension that proves to be the show’s weakest link.

Platt is continuously warmer from the get-go than his Broadway predecessor, Brent Carver, so there’s not as much of an emotional thaw this go-round. Conversely, he’s more sympathetic to the audience from the beginning of the show, which makes his eventual death by lynching even more wrenching. And one cannot underestimate how wonderful it is to have Platt back on a New York stage.

Diamond, in her first major New York appearance since The Cher Show, can’t quite escape the memory of Carolee Carmello (who starred as Lucille in the Broadway production), but she is indelibly moving. Moreover, the pair shine vocally on the rousing duet “This Is Not Over Yet” and the beautiful love ballad “All the Wasted Time,” and Diamond superbly puts over her big solo, “Do It Alone.”

Indeed, even if we lived in a time of total harmony, Parade would be worth reviving just to hear Brown’s breathtaking score, which effortlessly shifts among the aforementioned tunes to showstoppers like “Real Big News” and “That’s What He Said” to delicate melodies like “Pretty Music” to rousing anthems like “The Old Red Hills of Home.” That this production allows us to hear it played by a nearly 25-piece orchestra, with Brown conducting, is the icing on the proverbial cake.

And yet, the most powerful “song” is the one Brown didn’t write: the Hebrew prayer “Shema Yisrael,” gorgeously sung by Platt in his final moments. It affirms a belief in the incomparability of God, which Leo manages to find despite everything. I’m not sure, in 2022, all of us can do the same.