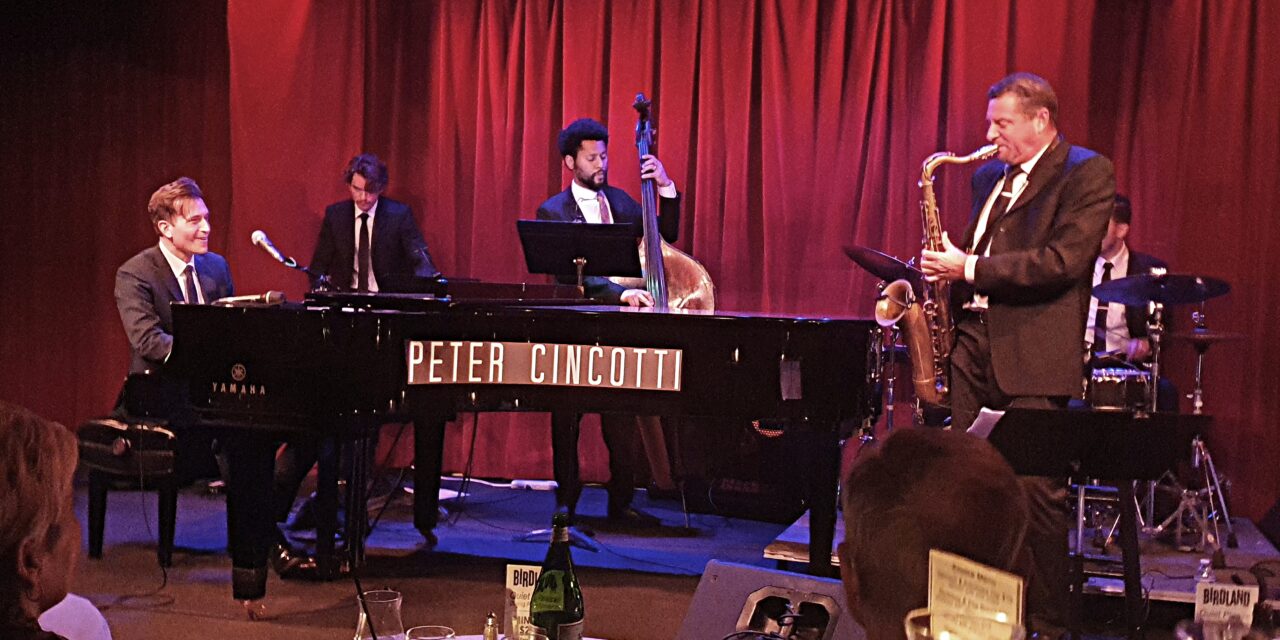 Theater Pizzazz caught singer/pianist/songwriter sensation Peter Cincotti at the third set of his five-night, ten-set residency at Birdland Jazz Club.  The New York born and bred Cincotti has made quite a name for himself as a versatile pianist who has mastered many musical styles, and as a songwriter whose songs are well-crafted and catchy.  An appealing performer with excellent chops, movie star looks and an engaging personality, Mr. Cincotti presented a kick-ass set of diverse jazz and pop songs.

Mr. Cincotti’s eponymously titled debut album, produced by the late Phil Ramone, reached No. 1 on the Billboard jazz chart back in 2003, when he was only 19, making him the youngest artist to achieve that status.  His ninth album, “Killer on the Keys,” is about to drop, and he released the title single in October.

The star, sharply dressed in a charcoal suit, white shirt and “skinny” tie, was backed by the ace quartet of Joe Nero on drums, Scott Kreitzer on tenor sax, Barry Stephenson on bass, and Tony Glausi on keyboards/synth.

Peter got off to a strong start with “Raise the Roof,” an Andrew Lippa song from his second album, “On the Moon.”  The song started a capella, building steam until it achieved its objective.  The roof stayed raised for the entire set.

Mr. Cincotti rattled off names of some of his varied piano and vocal influences, including Nat King Cole, Billy Joel, John Lennon, Lady Gaga and Scott Joplin.  He was astonished to learn that Joplin’s most famous stride piano composition, “The Entertainer” (made famous some 70 years later in the film The Sting), had lyrics written for Milton Berle, who sang the song on the television show The Muppets.  He sang these lyrics, playing a funky arrangement before eventually playing stride style.

If there’s one thing you can count on from Peter Cincotti, it is musical surprises.  He began singing Cole Porter’s “I Love Paris” standing at center stage, mic in hand, before working his way to the piano. Tony Glausi provided a synthesized string section on the Nord.  Mr. Cincotti seems to revel in the unexpected turns of melodic or harmonic confluence, as well as unique rhythm choices.  Piano and sax “traded fours” (or twos, in this case) in a fun musical joust.

Mr. Cincotti spoke of first meeting the great Phil Ramone, before performing his first single, the oft-recorded “Sway,” arranged here as a slow rhumba.  Mr. Cincotti is a solid singer with a strong voice, though he sounded a bit pinched or strained at this show as compared to a smoother sound on the recordings and videos I watched in preparation for this review. This might have been caused by the miking or the mix.

The aforementioned song “Killer on the Keys,” written by Mr. Cincotti, is an homage to his first piano influence, the recently deceased rock legend Jerry Lee Lewis (who was nicknamed “The Killer”).  The wild rock and blues stride style of “Great Balls of Fire” underscored “Killer,” a song that name drops many more of his piano heroes, including Billy Joel, Oscar Peterson, Leonard Bernstein, Ray Charles, Bill Evans, Little Richard, Leon Russell, Stevie Wonder and Art Tatum, simultaneously emulating each of their signature styles for a bar or two.

An emotional high point came with “Ghost of My Father,” a song Mr. Cincotti wrote to honor his dad, who “dropped dead” in front of him between sets when young Peter was playing his first gig at the age of 13.  Billy Joel’s influence was never clearer than in this beautiful, haunting ballad, which the star performed with just his own piano accompaniment.  Peter today performs, knowing he has “The ghost of my father on [his] shoulder.”

Mr. Cincotti closed out the set with Billy Joel’s “New York State of Mind,” played mostly in a honky tonk style, an Errol Garner-esque bridge played entirely solo, then gradually speeding up through the verses to a cacophonous, train-like finale.  The band squeezed in an encore of “I Love Being Here With You” as a bluesy, trad jazz, with Barry Stephenson throwing in a sax quote of “I’m Beginning to See the Light.” It was tempting to stay for the second set.