The Phenomenal Leslie Uggams at 54 Below 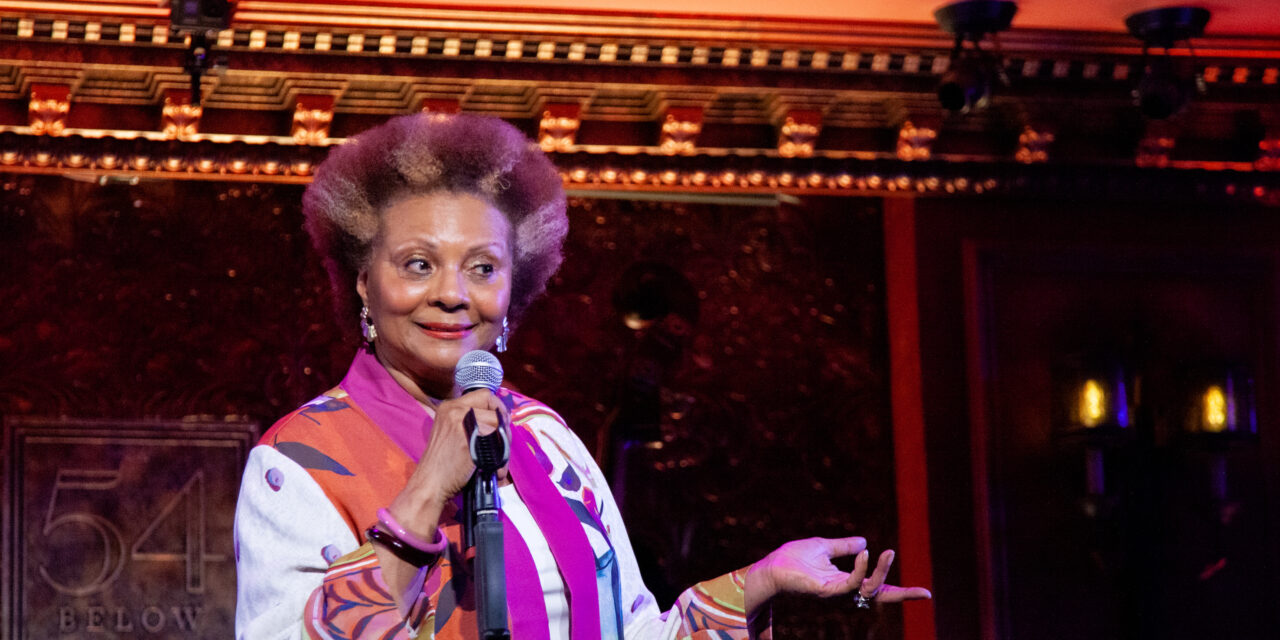 No, the headline is not hyperbole. There were approximately 150 witnesses to the opening night performance of Leslie Uggams’ weekend run of shows at 54 Below on Thursday, a return to the venue after an eight-year absence. Despite the lull, at seventy-nine years old, this veteran of the stage who has been performing consistently for seventy-three of those years (!) is currently giving what can only be deemed a master class on singing and survival.

A native New Yorker, Uggams began her career at the age of six on stage at Harlem’s Apollo Theatre and on television on most musical variety programs on network television—at the time they were all the rage. As a regular on the popular Sing Along with Mitch, she became a household name while still a teenager. Not only is she still working in her eighth decade in show business but, as she told the audience last night, she’s busier than ever after a career boost from her work on FOX’s Empire introduced her to a new generation of fans. Not confining her work to feature films like the smash hit Deadpool and its sequel (in which she plays Blind Al), she recurs on NBC’s New Amsterdam as Mama Reynolds and provides voice-overs on cartoons like Disney’s Minnie’s Bow-Tunes on which she plays Nana Beaver.

But on stage at 54 Below, the lucky 150 were enthralled by her set, which included songs from as far back as 1933 with Harold Arlen and Ted Koehler’s “Stormy Weather” to Benj Pasek and Justin Paul’s “You Will Be Found” (2016) from Dear Evan Hansen (performed in a stirring duet with her daughter, Danielle Chambers). The lyrics of her opening number from Leonard Bernstein and Stephen Sondheim’s West Side Story proved prophetic.

“Somethin’s comin’, I don’t know what it is
But it is gonna be great.”

Echoing what so many singers are saying now, that cabarets are back in business, Uggams’ first words to the audience were “It’s so good to see real people!” She was so at ease with the crowd, and they with her, it made for synchronization that was both rare and welcome. A tonic for our times, her positivity and pure craftsmanship were evident every moment she was on stage. Her musicians—music director and pianist Don Rebic, bass player George Farmer and drummer Buddy Williams—were perfection itself. It felt as if Uggams’ confidence was contagious.

She chose to do two songs from the 1967 Tony Award winning Best Musical, Hallelujah, Baby!, for which she won the Best Actress Tony at age twenty-three. Her performance of “My Own Morning” and “Being Good” (written for her by Jule Styne, Adolph Green and Betty Comden) sounded as if lifted off the cast recording made fifty-five years ago. Her tribute to Jerry Herman late in the evening offered her rendition of Mame’s “If He Walked Into My Life,” which she sang eight times a week in the 1985 Broadway revue Jerry’s Girls.

There was more Arlen, “Any Place I Hang My Hat is Home,” more Styne “Don’t Rain on My Parade,” and the requisite Rodgers and Hammerstein, due to Uggams’ now infamous linkage to “June is Bustin’ Out All Over.” If there’s anyone still unfamiliar with the video that went viral nearly thirty years ago, it occurred when an outdoor July 4th Washington D.C. concert was broadcast on PBS and poor Leslie got assigned a song she didn’t have in her repertoire. Told it would be fine since there would be cue cards, she was game, and all would have been just fine . . . had it not rained for two days, turning the grass to mud. The cue card person slipped and fell, the cards went flying, and there was Leslie Uggams on national television making up nonsense words while she slinked through the crowd and made her way to the stage. Always a pro, she never let it seem like the fiasco bothered her and when no one said anything to her after, she felt like she’d made a narrow escape. That is, until a friend phoned her a few years later to say, “Honey, did you know that you are in every gay bar in America?”

She’d gone viral. And to this day, it’s a very popular YouTube video (the link is here). At 54 Below, Uggams pulled out a piece of paper and gave a dramatic reading of the on-the-spot gibberish she came up with, which brought the house down. A trouper (with a sense of humor) till the end.

There’s only tonight, Friday the 11th and tomorrow, Saturday the 12th, at 54 Below to see this amazing actress sing with a voice she has been blessed with seemingly since birth. It’s truly a do-not-miss experience. All hail Leslie Uggams.