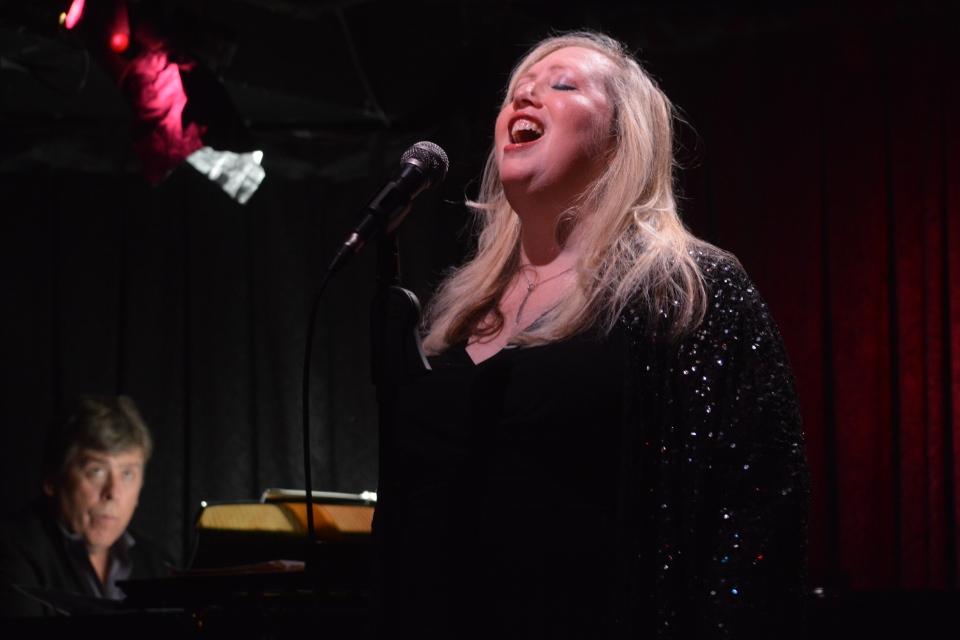 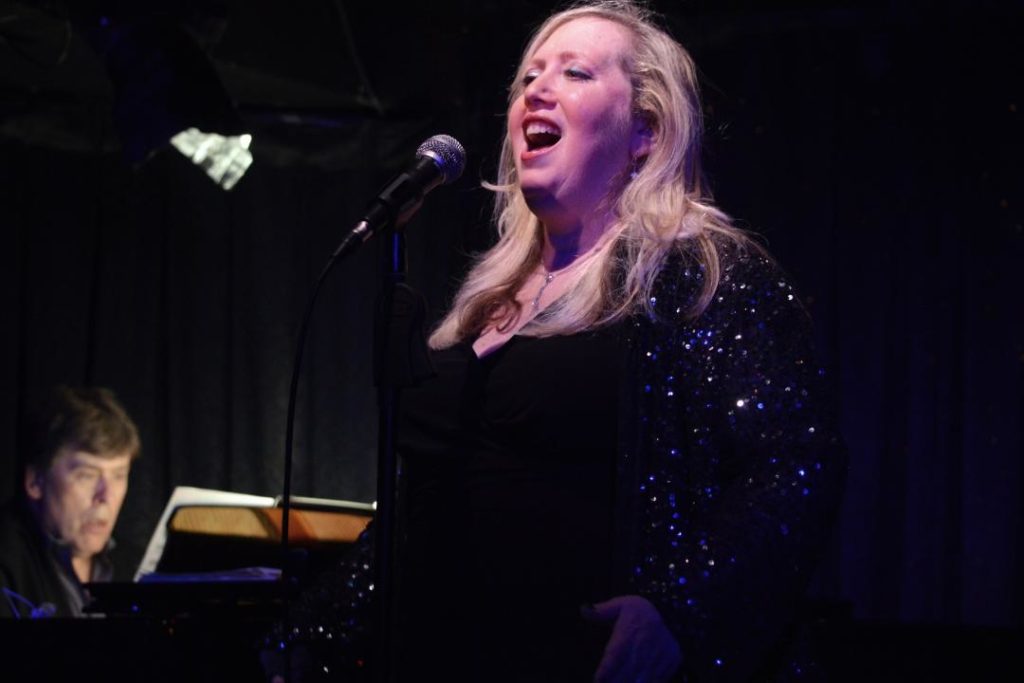 Renee Katz is a buoyant, optimistic Cabaret star whose powerful, rapturous, playful soprano reminds many of her fans of Barbara Cook because, like Cook, Renee Katz sings with her whole heart in the same exquisitely intimate way Cook did. She also reminds me of Jane Frohman who, like Katz, was struck by an unpredictable catastrophe, and like Frohman, Katz refused to let bad luck undermine her musical aspirations. Forced to give up the instrument on which she had previously excelled, she switched her area of musical concentration from instrumental to vocal by sculpting her voice into a stirring coloratura-ish soprano that serenades and soars as impressively as her fingers formerly fluted.

Jule Styne, whose music Renee Katz embraces in this Cabaret show, was an undisputed prime mover of American musical theater. He wrote the scores for 18 Broadway musicals. Many were phenomenal successes, including Gypsy, Funny Girl, Bells Are Ringing and Gentlemen Prefer Blondes but only Hallelujah, Baby! won a Tony. How? Why? Gypsy lost out to LaGuardia and the von Trapps. Fanny Brice was done in by Dolly Levi. Bells didn’t ring loud enough to swamp My Fair Lady and Blondes never even made the nomination grade. Voters!

Styne was a musical prodigy. By age 10, he’d performed with the Chicago, St. Louis, and Detroit Symphony Orchestras. He left the Classics, thanks to the Chicago jazz bands in the ‘20’s, moved west to coach Hollywood stars Shirley Temple and Alice Faye in the ‘30’s, and in conjunction with lyricist Sammy Cahn, wrote movie melodies in the ‘40s including “It’s Magic” and the Oscar-winning “Three Coins In The Fountain.” During his lifetime, Styne supplied melodies for 1500 songs. His first hit? “Sunday” in 1926 and he was still working, 67 years later in 1993, the year before his demise. 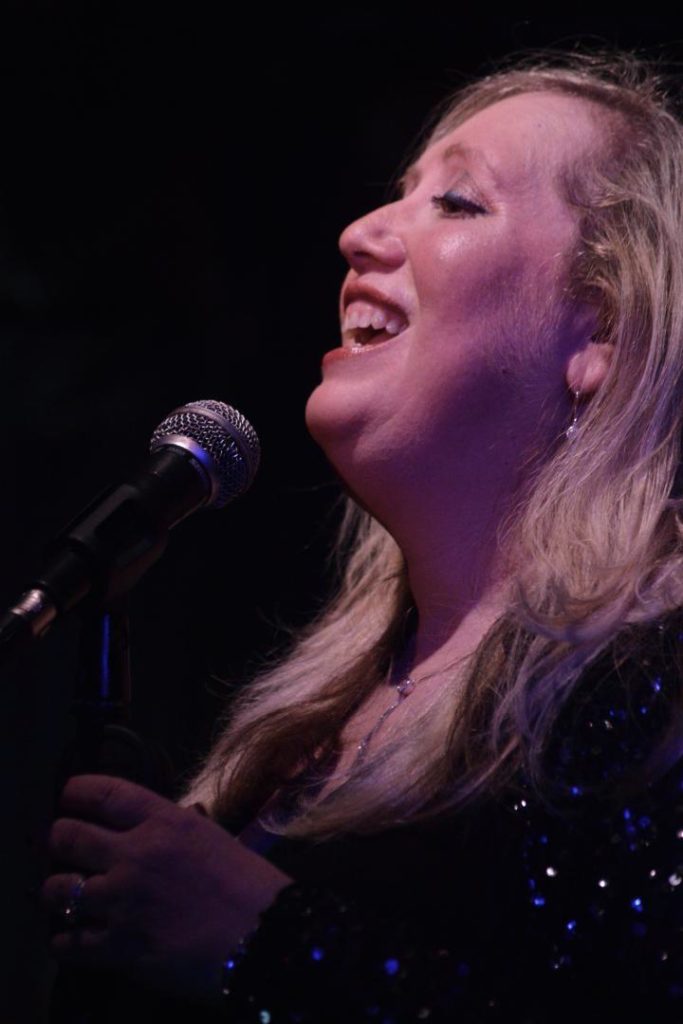 Renee gives Jule her all. She appears on stage, her angelic face and blonde hair encircled by a spotlight, handsomely attired in basic black topped by a glittering silver sequin jacket. Her equally angelic soprano is breathtaking when she sings Jule Styne’s best songs. His lush, romantic melodies suit her delivery and sensibilities to a T.

Her opening selections are breathtaking. First “Time After Time,” its romantic melody with the straightforward, immortal Sammy Cahn phrase, You’ve kept my love so young, so new, as noteworthy now as in 1947 when Cahn wrote it, followed by “When It Happens to You,” an irresistible showstopper from the last musical Styne and lyricist Bob Merrill worked on, The Red Shoes, which closed after just five performances in 1993.

Renee was at her best when Styne was at his best. Styne was at his best when the words to his tunes came from lyricists who were capable of supplying immortal concepts to Styne’s melodies, like Comden and Green did in their long-lasting #metoo perception of women in “My Own Morning,” from the Tony-Winning Hallelujah, Baby, “Just in Time,” from Bells Are Ringing and the deliciously sweet “Never Neverland,” from Peter Pan. I think Styne’s best collaborator hands-down was Bob Merrill who provided the passion of “People,” the determination in “Don’t Rain on My Parade,” the gorgeous, delicate sensuality of Renee Katz’s favorite song, “Music That Makes Me Dance!” I also liked how Renee and Director Jeff Harnar backed “Don’t Rain on My Parade,” with a different, soft, laid-back, jazzy arrangement, rather than having Renee compete with Ms. Streisand in a belting out contest which P.S. I think Renee would have won.

Only one Stephen Sondheim Gypsy lyric made the song list – “Together,” which hardly demonstrates Sondheim’s verbal dominion over the English tongue. Nor was there a single tune from Gentlemen Prefer Blondes which would have allowed Renee to display her playful sexuality. I was also bemused at the inclusion of some of Styne’s fortunately forgotten works like “Victory Polka,” circa WWII and OMG “I Did It On Roller States,” a tuneless blob rightfully dismissed from Funny Girl before it opened. If these two were meant to allow Jule Styne and Renee Katz to display their diversity, then diversity is overrated and should be damned.

John Cook, Musical Director, and Renee played nicely together in their vocal duets and supplied wonderful arrangements for the band, Cook and Tom Kirchmer on Bass, who were as good as it gets. I consider “Renee Katz Sings Jule Styne” a work in progress and am looking forward to a revisit when, if and after Renee and her accomplished Director Jeff Harnar consider any revisions the second time around.