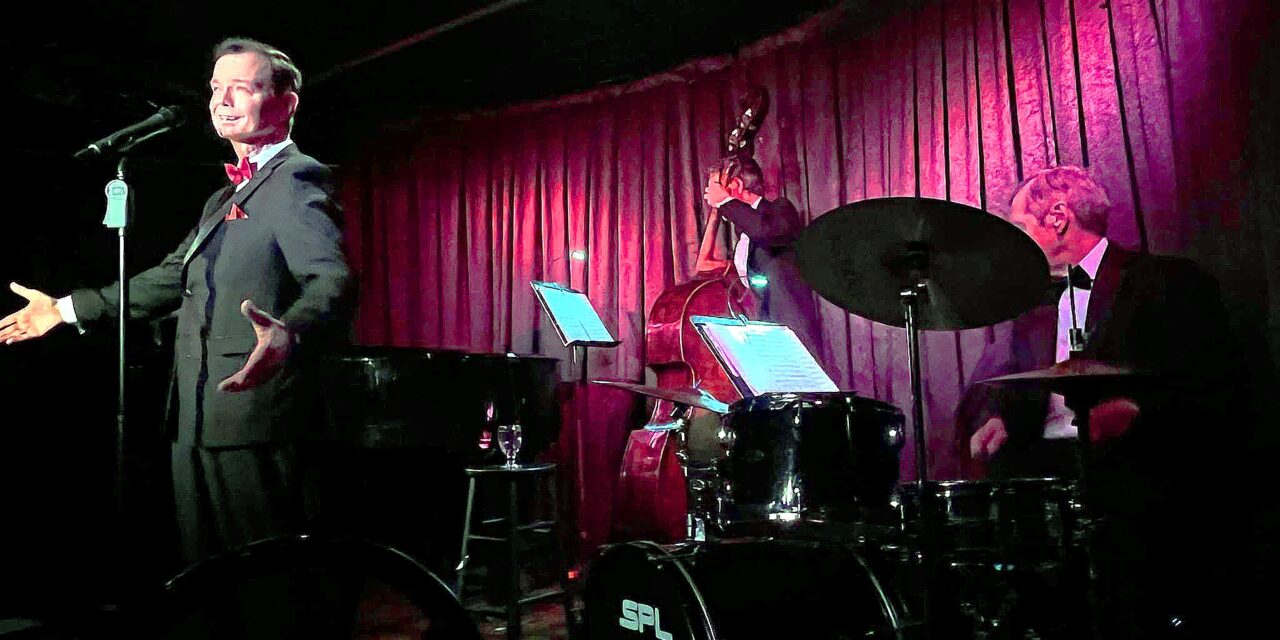 The somewhat insular New York cabaret scene is filled with talented and beloved local stars who are largely unknown outside of The Big Apple. Yet for the denizens of New York cabaret, they are indispensable. They are not only performers who can fill a room, but are cheerleaders for the others—people you can count on to show up at seemingly every show, supporting both those at the early stages of their careers as well as those who’ve become stars. Unfailingly, there are kind, encouraging words for both. Performer Richard Holbrook is one such gem, present at seemingly at every show I attend. A mensch, really. This week I had my first experience of him as a performer at his lovely, sold-out holiday show, Christmas Magic in the Big Apple, in the Original Room of Don’t Tell Mama.

Richard, debonairly dressed in a tuxedo with a red bowtie and pocket square, set the tone for the evening with Cole Porter’s “I Happen to Like New York,” using the Marvin Hamlisch arrangement from for Liza Minnelli’s 1987 Carnegie Hall concert.

The show contained many of the de rigueur holiday songs you’d expect from the title, such as “Silver Bells,” “Jingle Bells,” “Winter Wonderland” and “The Christmas Song,” often in medleys. These were all fine and serviceable, buttressed by Richard’s warm introductions and patter. Had there been nothing but holiday chestnuts, the show would have made for a very pleasant box of Russell Stover chocolates under the tree. Suffice it to say that his sweet voice and delivery did all these songs justice. What elevated this show to a deluxe box of Godivas were Richard’s other, more unusual choices for a Christmas show—songs about a small town or a Sondheim song about being alone, a surprise tribute segment, and even a very funny novelty song (“Too Fat for the Chimney”) that fat-shamed Santa.

“Pure Imagination” from Willie Wonka and the Chocolate Factory might not be a Christmas song, but isn’t fantastical imagination what the holiday spirit is all about?  It was paired as a medley with Cole Porter’s “Use Your Imagination,” one of Porter’s less-covered songs.

Richard spoke candidly of his 2013 battle with stage four jaw cancer that nearly killed him and stopped short his career. In a medical miracle, the surgery and other treatments saved his life, but cost him his jaw (replaced with the fibula of his left leg).  Richard had to relearn eating, speaking, using his tongue, and, of course, singing.  His voice, miraculously, survived everything.  Other than some minor limitations in opening his mouth wide for certain notes, his singing is unimpaired.

The singer performed several songs that celebrated this miracle, and through his survival story and these songs, he truly connected with the audience. The French songwriter and singer Charles Aznavour wrote many beautiful songs. Richard’s poignant interpretation of “Quiet Love” was powerful, inducing tears. He followed this with an emotional medley of “I Like Life” and “I’ll Begin Again,” both written by Leslie Bricusse for Scrooged.

A sweet surprise came in the form of “Our Town,” an obscure song written by Jimmy Van Heusen and Sammy Cahn for a live musical performance of Thornton Wilder’s Our Town in 1955, which never aired again. The prodigious and legendary lyricist Cahn wrote some of the most recorded songs in history, winning four Oscars; yet today his music is rarely heard in venues like this.  “Our Town” gave a small-town charm to start a tribute to the lyricist, which included “Let it Snow!” and “The Christmas Waltz.

The Tom Nelson Trio (with bassist Tom Kirchner and drummer John Redsecker) was given a couple of opportunities to flaunt their jazz chops with a Christmas medley. While Richard is not a jazz singer, he did fine here.