Robin’s Nest- A Benefit for Helpusadopt.org 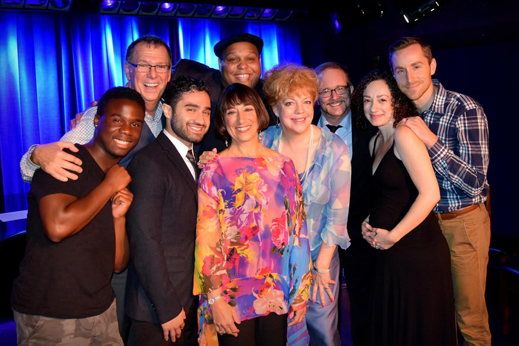 Founded in 2007, Helpusadopt.org is the only grant program in the United States that fosters all types of families (married couples, single parents and LGBT partnerships) without discrimination as to race, religion, or sexual orientation. It helps enable all types of adoption (domestic, international, foster care) with grants up to $15,000. There is no application fee. Funds are raised through private donations and fundraising events in New York, Philadelphia and Los Angeles. To date, the organization has awarded 179 adoption grants totaling just over $1.5 million. (Don Gallagher/Mark Waldrop). She then introduces 11th grade Professional Performing Arts High School student, Isaiah Feil-Sharp, who offers an earnest “Make Them Hear You” (Lynn Ahrens/Steve Flaherty.) In conversation with the host, we learn Feil-Sharp has had a harrowing foster care history. Fortunately, this ended just two years ago, when he submitted himself to Janice Huff’s Wednesday’s Child, a weekly adoption feature that airs Wednesdays during News 4 New York at 5pm. His proud parents beam from their shared table. “There are so many kids that just need to know they will be loved by someone who will let them know that there is hope in their lives.” (Feil-Sharp)

Arthur Ross, a young recipient of Singers Forum\AEA Vocal Scholarship, delivers a mischievously animated “Friend Like Me” (Alan Menken/Howard Ashman) as the genie from Aladdin. Ross has spirit, phrasing and moves. Fun! A charming version of Irving Berlin’s “I Love a Piano” is performed by actress/vocalist Megan McGinnis, who most recently starred in the splendid off Broadway production Daddy Longlegs. Seemingly besotted, her voice exhibits graceful control and gamine character. Tonight’s MD, Andrew David Sotomayor, plays a terrific old-timey arrangement by Tedd Firth. It seems McGinnis’s mother was both adopted and open about it. In fact, when her mom went searching for her birth mother, Megan participated. “I feel the connection.”

William Finn’s “Anytime” is performed by actor/vocalist Adam Halpin, McGinnis’s husband. Halpin is invested in the lyric. When he goes up an octave, the artist creates a little frisson.

…And I am there each morning/I am there each fall/I am present without warning/And I’m watching it all…Against his better judgment, the two played together in Daddy Longlegs its last 7 months. “I was terrified, but it was the best experience of my life.”

The couple then lilt through “Somewhere Over the Rainbow” (Harold Arlen/EY Yip Harburg). As they turn towards one another, we can see Megan’s pregnant belly. This is one child who will enjoy loving parents and be treated to lullabies.

“I’ve now been branded a senior citizen,” quips this evening’s Director, actor/vocalist/ teacher Eric Michael Gillett. “Why don’t they just put ‘coot’ on my Metro Card?!” Gillett tells us he’s finally playing men of a certain age, most recently one who was abusive. “In order to get through it, I found this earworm of a song by Dar Williams.” “After All”: It’s better to have fallen in love/Than never to have fallen at all/’cause when you live in a world/Well it gets in to who you thought you’d be…arrives with deep, pulse-slowing sincerity. KT Sullivan, vocalist and The Artistic Director of The Mabel Mercer Foundation, is tonight’s Special Guest. Coming from a family of 8, married to a man who has 5 children, one can safely say the lady’s sense of family is highly developed. (Her step-grandchildren perceptively call her Grande Dame.) Two, wry, signature songs-Stephen Sondheim’s “I Never Do Anything Twice” and Jerome Kern/Irene Franklin’s “My Husband’s First Wife,” waft out in Sullivan’s nightingale voice and comedienne persona. John Kander/Fred Ebb’s “Colored Lights.” her third number and my favorite, starts as a soufflé, growing dramatic with surety and style.

Eschewing high pressured auctions and high priced tickets, the host encourages as many people as possible to join the fold, spread the word, enjoy the entertainment, and hopefully donate. Robin Westle has selflessly championed helpusadopt.org through eight benefits, each including musical entertainment and featuring people who have been affected by adoption. The impassioned fundraiser is a speech pathologist, board member of helpusadopt.org and with husband Tom, proud parent of two adopted children.