Rosenkrantz and Guildenstern Are Dead on Broadway HD 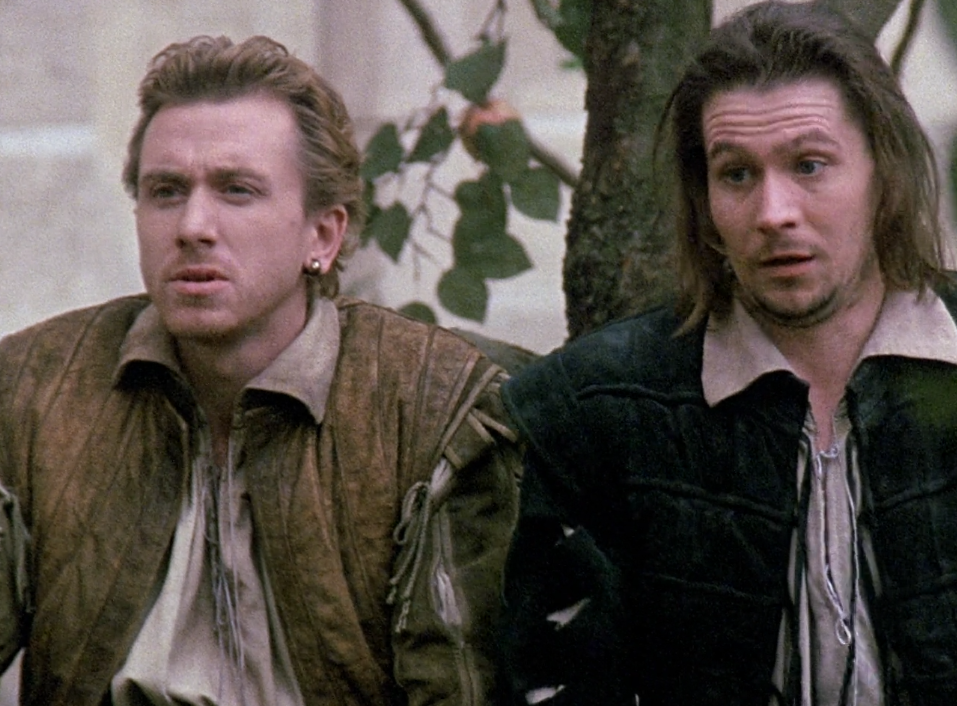 In 1966, a young journalist and newly turned playwright named Tom Stoppard, debuted his absurdist, existential play, Rosenkrantz and Guildenstern Are Dead at the Edinburgh Fringe Festival. The play went on to great success. In New York, the Royal National Theatre production played on Broadway from October 1967, through October 1968. In 1990, a film version was released, adapted and directed by Stoppard himself. It’s this version of Rosencrantz… that’s just had its debut on Broadway HD. Alas, for while the stage play––in three acts, with a running time of well over two hours––crackled and sizzled with the electricity of Stoppard’s clever puns, observances and repartee, the film version––at just short of two hours––lies flat as a pancake. While Stoppard’s eye for framing a shot is superb, the cinematography by Peter Biziou sumptuous, and the acting sublime, the fault lies not in the writing, directing or editing, but in the very nature of filmmaking itself.

In Shakespeare’s Hamlet, Rosencrantz and Guildenstern are two very minor characters, courtiers and childhood friends of the Prince. In his play, Stoppard extracted these two minions and built a backstage dramedy around them. The conceit is that R and G are watching the action of Hamlet from the wings, commenting on it and occasionally being sucked into the incomplete and partially seen parts of it. Thus they become increasingly confused about what they’re observing. This ping pong game of what is occurring backstage and on–– the back and forth dynamic–– is what made the play so compelling and successful. Opening up the piece to film, which integrates action, rendered it void of the very process that allowed audiences to be captivated throughout. In film, we can only see what the camera sees, and in this case there isn’t very much to grab onto. 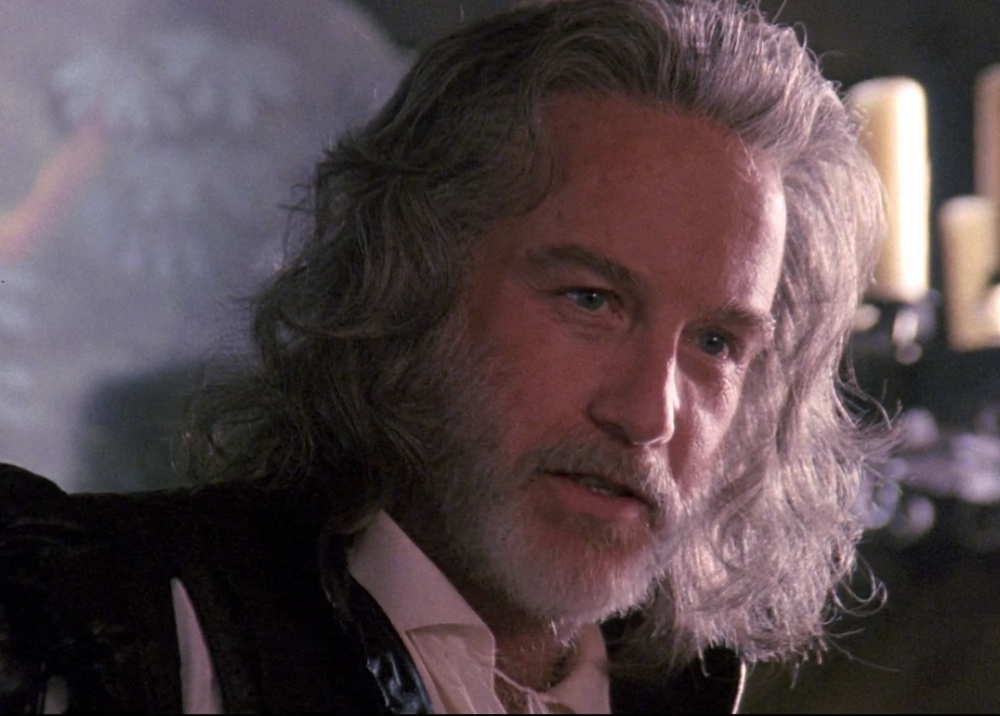 Tim Roth as Guildenstern and Gary Oldman as Rosencrantz, both forceful, disciplined actors, are delightful in their respective roles. The chemistry between them plays well, with Oldman’s sometimes childlike portrayal of Rosencrantz pinging against Roth’s wiser, often sardonic, Guildenstern. Like most British-trained actors, they know the key to playing farce and satire is to take it deadly seriously. The scene-stealer though, was Richard Dreyfuss as the Lead Player of a band of thespians that R and G encounter. Dreyfuss, not known for being a romantic lead or sex god, exuded both qualities here, fashionably costumed and in command of a goodly British accent. Plus, as the adult in the room, he delivered the wittiest of lines with wryness and gravitas. Glimpses of Iain Glen as Prince Hamlet left one with the desire to see this amazing actor play the role in earnest. Ian Richardson as Polonius, Donald Sumpter as King Claudius, and Joanna Miles as Gertrude all excelled in their supportive roles. 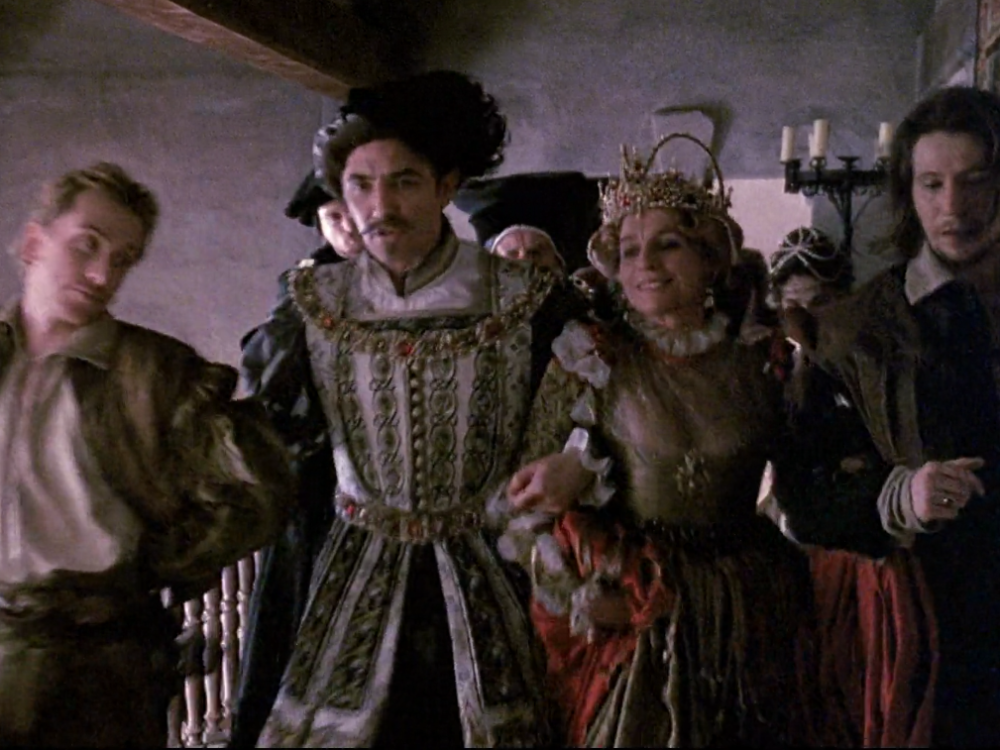 As to the title of the play/film: in the original play, as in Stoppard’s stage and film versions, Rosencrantz and Guildenstern are given a letter by King Claudius to deliver to the King of England. The two are accompanying the Prince to exile in England. On the voyage there, Hamlet discovers the letter, which asks the English King to put him to death. He alters it and jumps ship during a pirate attack, returning to Denmark and leaving R and G to sail on. At Hamlet’s end, the main characters––Laertes, Ophelia, Polonius, Claudius and Queen Gertrude––all lie dead. Horatio is left to hear the arriving ambassador from England starkly report, “Rosencrantz and Guildenstern are dead.” The film ends with the thespians, the existential link between what is real and what is make-believe, packing up their cart and continuing on their peripatetic journey. It’s a fitting image to end a superlative stage work that probably had no business being a film.