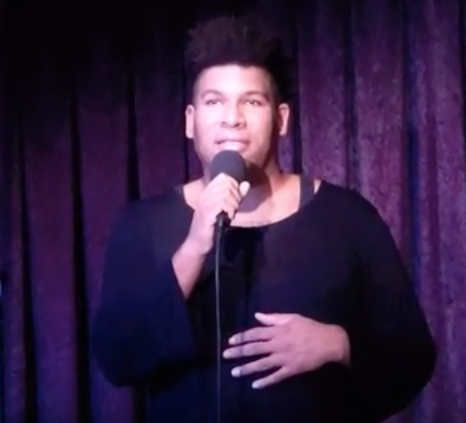 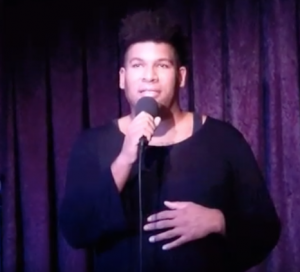 For one night only, Toronto cabaret and show performer came to New York City and appeared in a very unusual show entitled “#Kander & Ebb” at Don’t Tell Mama on November 15. There was a packed house full of performers and some Canadian fans who had traveled to New York to support their local boy. What was very unusual about this show was that the Kander & Ebb songs performed were not the ones you would expect, even with all their hit shows on Broadway. Hinds’ great music director at the piano was Mark Selby who kept Hinds on his songs schedule and played virtuoso piano.

Hinds is a tall man with a Bieber haircut and was wearing a baggy black sweater and silk leopard patterned leggings but he did not sing “Big Spender.” No, he pranced all over the stage singing “Colored Lights” from “The Act.” And then he told of his personal meeting with Kander at the premiere of “Chicago” movie and having a less fortunate encounter with Ebb later.

Almost no one sings songs from “Steel Pier,” one of the rare Kander & Ebb flops (except for “Anybody’s Girl” and “Second Chance”) but Hinds took the opportunity to demonstrate how sick Ebb’s mind was by choosing “Wet,” “A Powerful Thing,” and “Somebody Older.” Also, out of “Woman of the Year,” Hinds did a wonderful “I Wrote the Book” and, later, with a Sondheim finish, “Sometimes A Day Goes By.”

Hinds told of meeting Chita Rivera backstage at “Kiss of the Spider Woman” as a young gay kid of 12, and how she took him under her wing, encouraging him to perform and actually getting him his first job touring with Liza Minnelli in the United States.

He told us about how Kander & Ebb were at a dinner party and when the host found out they were songwriters, challenged them to write a song for the party. In the ten minutes between the main course and dessert, they wrote “I Don’t Care Much” and Hinds sang it superbly. The selections from “Kiss of the Spider Woman,” including “Only in the Movies,“ were given the full treatment. Hortense’s song “Only Love” from “Zorba” and “Love and Only Love,” from “The Visit” were a great match.

Towards the end of the show, “How Lucky Can You Get” began happy, but suddenly catapulted into an emotional breakdown, with forgotten lyrics and pathetic sadness, all enhanced by Selby’s strong support. Hinds’ encore was a blissful “Mein Herr” suddenly merging into the sad and moving “Quiet Thing.”

It was a great cabaret evening and I hope that Ryan G. Hinds and Mark Selby return to New York City soon.