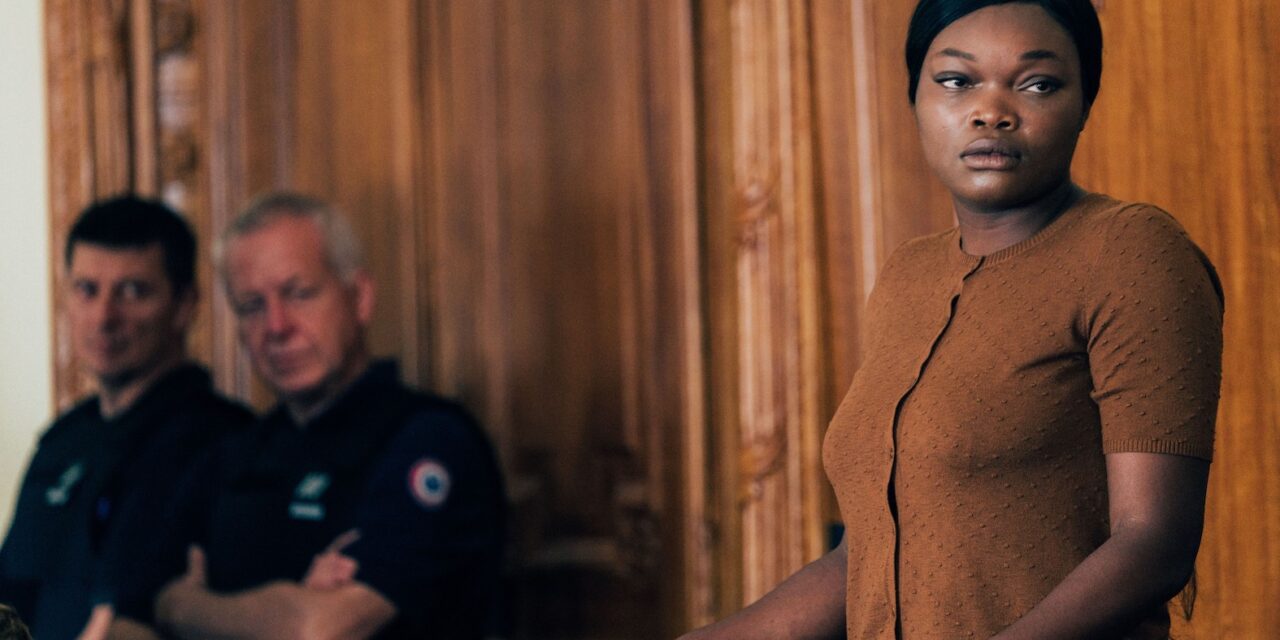 French documentarian Alice Diop applies her well-honed skills to reconfigure the true story of an infanticide by spinning it into her debut fictional narrative Saint Omer. Currently showing at the NYFF60, her gripping courtroom drama pulsates with irony, thematic complexity and soulful humanity.

When Fabienne Kabou subjected her 15-month-old baby girl to the rising tides on a beach in Berck-sur-Mer in 2013, drowning her, the public reaction, understandably, was one of shock and loathing. While pregnant, Diop read about Kabou’s decision to kill her baby. Struck by an indefinable connection she felt with Kabou, Diop poured her feelings into the character of Rama, a journalist, whose perspective she uses to evoke her rich examination of female personhood, as it abuts cultural definitions of motherhood and womanhood, all pervasive ideas in Saint Omer.

Rama (the superb Kayjie Kagame), becomes Diop’s alter-ego, through which we attempt to understand the crime and killer. Diop renames the tragic Kabou as the character Laurence Coly (the mesmerizing Guslagie Malagie).

The film begins as Rama, a successful novelist, gives a lecture in a university classroom on Marguerite Duras, the screenwriter of Hiroshima, Mon Amour. In what becomes a key theme in Saint Omer, Rama discusses that in the film, Duras converted the shame directed at the shaven-headed, female French collaborators in World War II. In the film they move from traitors to heroines. Rama refers to this conversion as bringing these women into a state of grace by viewing their actions in a different way—a bold, defiant act in its redefinition and absolution.

Diop switches the scene to Rama’s discussion of her intended research with her colleague. She has chosen to look into Laurence Coly’s infanticide, an act which may have some parallels with the character Medea, the most renowned of women child killers in all of literature. Rama’s approach is to sit in on Coly’s trial at the Saint-Omer Criminal Court: to watch the defense and prosecution, draw her own comparisons and conclusions, relate them to the characterization of Medea, then shape her work.

As the dramatic scenes in the courtroom unfold, we are impressed by Coly’s testimony. She admits she killed the baby, but the defense she gives in part is largely cultural. She is an immigrant from Senegal, who wishes to excel in her studies and obtain a Ph.D.; and the baby that she loves is an impediment to that. However, directly related to her crime, she states that she is a victim of witchcraft, and her act was because of a curse placed upon her.

The prosecutor, a white male, is harsh as he questions, then hammers Coly and refers to her as a manipulative liar. The female judge is more understanding in her questioning and the female defense lawyer makes a persuasive presentation.

Throughout, Diop switches between Rama’s watchful gaze as she listens to Coly and the courtroom players, then reveals the effect the trial is having on Rama’s personal life and selfhood. She fears the cold upbringing she received by her mother may be transferred to her own baby. Is Rama like Medea? Like Coly? In a split-second might she kill her child because it is an impediment to her career? Has the culture cursed her and women with its demands of motherhood, as Coly believes herself cursed by circumstances that are tantamount to witchcraft?

Diop intrigues us in revealing that Rama identifies with Coly. Their backgrounds are similar. Rama is tormented by flashbacks of her mother’s lack of love. Would her mother have killed her, but for mitigating factors?

The film raises unresolved questions. How many women who have careers find their children impediments? If they don’t kill them physically, do they damage them emotionally? The stress of raising children and maintaining a career with little help from partners can be untenable.

The performances are top-notch and drive the dynamic toward the profound conclusion of the film that connects with the themes delivered by Rama’s lecture on Duras in the beginning. Diop’s cinematic style is heavy with contrasts. In the courtroom she uses flat lighting and long sequences where actors talk to the camera in full frontals. When highlighting Rama’s personal life and her dreams, Diop uses darker lighting, quick cuts and stark, filtered compositional shots. It is as if we are looking through a lens darkly at her past remembrances.

This is one to see. For tickets go to the NYFF60 website: www.filmlinc.org/nyff2022/guide/