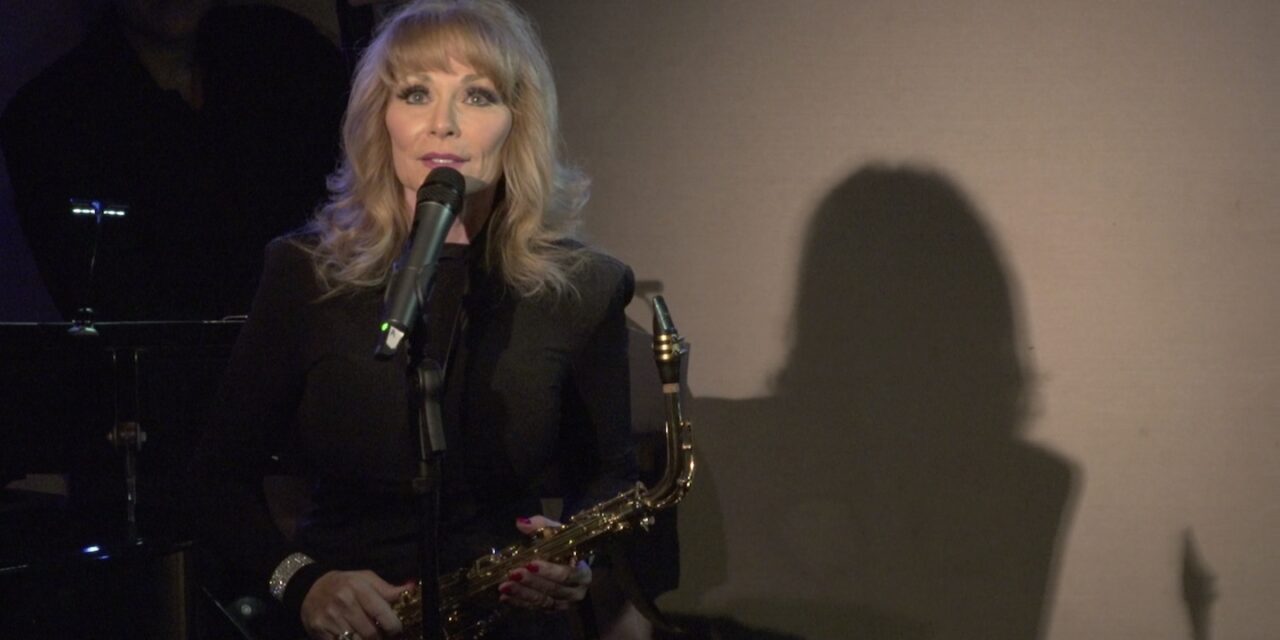 It was her cabaret debut, and if the delight pulsing through the audience was any indication, Susie Clausen, aka “Saxy Susie,” has a bona fide cabaret life to look forward to. Clausen has already had a successful career in real estate and she’s raised children. Never one to sit still, and contemplating her next adventure, the California native was touched by the hand of destiny on a cruise with husband Craig. She was happily jolted into awareness by a fellow sax-playing passenger in the ship’s lounge. A mental light bulb lit up. Fast forward to this debut evening at Don’t Tell Mama in which following a dream yielded dividends for both performer and her delighted audience.

Clausen led with a medley of “I Dream of Jeannie” (Richard Weiss)/“If You Knew Susie” (Buddy DeSylva, Joseph Meyer)/“If My Friends Could See Me Now”(Cy Coleman, Dorothy Fields). As the show progressed, it transpired that the evening was strong on medleys. But as Clausen herself joked, her mentor is Marilyn Maye, the master of medley. It was Maye who took Clausen under her wing, taught her to sing and helped cultivate her entertainer persona. The individual numbers and their proximity to each other in their respective medleys was perfectly curated by Maye for Clausen’s vocal range and technical abilities. Also well-calculated was the ratio of sax playing with vocalizing in a number. Jazz artists such as sax players Lakecia Benjamin and Camille Thurman tend to the former. Those who consider themselves more as entertainers, such as Danny Bacher, lean to the latter, as did Clausen.

Clausen’s narrative was just enough; this was a show where music was front and center. The song set-ups revealed highly personal experience. Many of the song lyrics throughout were customized as part of her delivery—another Maye talent and asset. A sing-speak approach also helped Clausen’s delivery as a relative novice in her vocal studies. As to how she decided to take up the sax, for instance, there was the Jazz Baby medley. In “Jazz Baby” (Blanche and M.K. Jerome)/“Ballin’ the Jack” (Jim Burris, Chris Smith)/“Charleston” (James P. Johnson, Cecil Mack), Clausen explained that her jazz-loving father had exposed the young Susie to that music at an early age, and she took to it—and to the sound of the saxophone. A big, big arrow pointing to Clausen as a person of determination is how she approached her desire: she bought Saxophone for Dummies, read it cover-to-cover, and with alto sax in hand took her first lesson in the summer of 2015. Her tone is smooth and her abilities, playing on melody, are solid; as she acknowledges, she’s not (bebop innovator) Charlie Parker.

Humor is a large part of Clausen on stage; she’s willing to make fun of herself too, a product of a good-natured charm she naturally radiates. Her Backwoods Barbie medley of “Backwoods Barbie” (Dolly Parton) and “Your Cheatin’ Heart” (Hank Williams) was a testament to those attributes. There’s also a positivity about her that expresses itself in a passion for life and what she’s doing with hers specifically. She loves people and she loves life and we of the audience are certainly the beneficiaries of Clausen’s joy in “going for it.” She’s having a whale of a good time, and the feedback loop she creates showers happiness on all in the room.

Clausen’s comedic instincts are also revealed in the Diamond medley: “Diamonds are Forever” (John Barry, Don Black/ “Diamonds Are a Girls Best Friend” (Jule Styne, Leo Robin)/“Material Girl” (Peter Brown, Robert Rans) and “Big Spender” (Cy Coleman, Dorothy Fields). This last number is a key to Clausen’s vocal tone—reminiscent of Gwen Verdon. Like Verdon and other performers like her, it’s the set of attributes that makes for excellence and success on stages large and small. Clausen’s easy, likability is backed up with a supply of talent that will carry her through as she gains more experience in front of audiences. Leaving on a wry note about her debut, she offered “Please Don’t Talk About Me When I’m Gone” (Sam H Stept, Sidney Clare). No worries on that one.

In addition to the stellar direction and arranging by Marilyn Maye, Clausen was backed up by a quartet of A-list musicians. David Pearl was pianist-conductor, with Saadi Zain on upright bass and Ray Marchica on drums. This core rhythm section played in a groove with Clausen’s sax playing and singing. For musical enhancement, guitarist Peter Calo added plenty of texture, especially with splendid country backing on “The Gambler” (Don Schlitz).