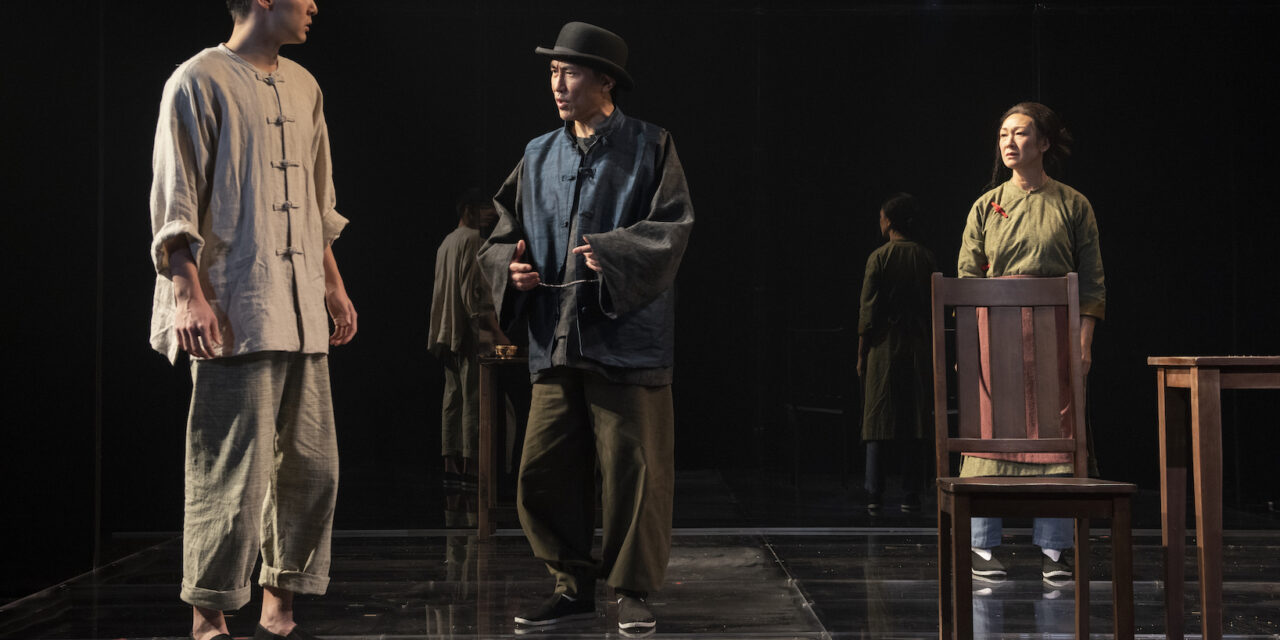 America was and continues to be built on the backs of immigrants, their labor, creative energy and resourcefulness constantly replenishing the nation’s land and its soul. Yet racism, xenophobia and the cruelties of unfettered capitalism have always conspired to pile challenge after challenge on those dreamers who are willing to sacrifice everything they know for the hope of a better future.

Lloyd Suh’s “The Far Country,” about Chinese immigrants in the early 20th century trying to work their way around the Chinese Exclusion Act of 1882, feels timely but also timeless, a tale of strivers so desperate they’re willing to relinquish their own identity, their sense of self, just to make their way here.

The first act, set in 1909, is about the artful dodge and the price of admission, in which immigrants peddle well-rehearsed stories to skeptical government officials to gain American citizenship and access to “Gold Mountain” as the Chinese called California. America’s bureaucracy is impersonal and relentless but ultimately no match for the lies told by the fiercely determined and resilient immigrants.

First, we meet Gee (Jinn S. Kimm), who has been living in America and then Moon Gyet (Eric Yang), whose mother Low (an excellent Amy Kim Waschke), pays a fortune (mostly in debt assumed by her son) to get forged papers so Moon Gyet can pretend to be Gee’s son. Moon Gyet spends seventeen months in Angel Island’s detention center (with hundreds of men and one toilet) but never cracks under the mounting pressure as he is questioned and then questioned again: “Your friend, who visited your house when you were nine, what was the name of his family’s mule,” an interrogator asks, hoping to catch a mistake. The number of steps in every house in the village becomes almost a running gag.

The first act is often cold and dispassionate as we get snippets of the history of America’s exclusionary attitudes and laws mixed in with the battle of wills but director Eric Ting is aided by the immensely appealing cast, especially Kimm and Yang, and skillfully paces the action, using a mostly bare set for this nightmarish limbo. The set itself comes alive when Suh has Moon Gyet talk about the “delicate calligraphy” that forms “careful volumes of almost invisible poetry” carved into the walls by those in detention; the writing begins to appear on the walls of the set designed by Clint Ramos.

But what makes Suh’s play more powerful is how he switches gears in the second act. It jumps forward in time nearly a decade and Moon Gyet has returned home to sell his name like Gee did, hoping to escape his crushing debt by finding someone to pay him for a chance to fake their way into America. His mother, from whom he had long hidden bad news, is appalled at first by the way he has sold himself for a future America doesn’t want him to have, but she is ultimately pragmatic and helps him find Yuen (Shannon Tyo), a young woman who is more than a match not only for Moon Gyet but seemingly for all the hardships America has to offer.

Thanks to the witty, charming and compassionate performance by Tyo, it is through Yuen and the family she builds in America that we finally see the possibilities, the beginnings of the future desired and fought for by all the immigrants who have come and continue to pour over our borders.

The Far Country is presented by the Atlantic Theater Company at the Linda Gross Theatre (336 W. 20th Street) through January 1st. Running time is two hours.