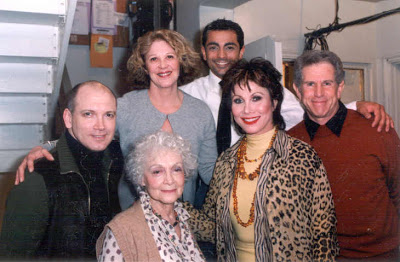 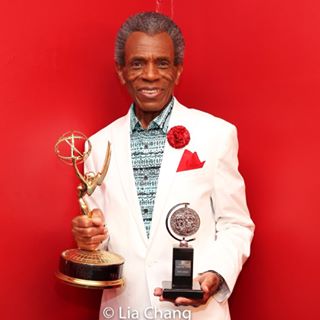 Andre De Shields: more where they came from 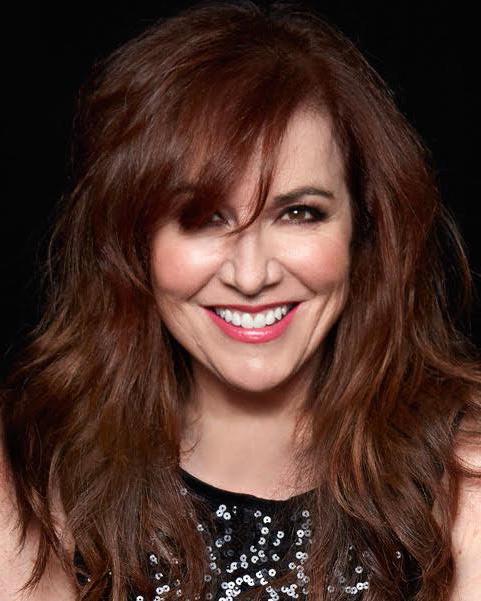 Debbie Gravitte of Over Here!: where The Sisters Andrews met The Brothers Sherman

MONDAY BLOODY MONDAY: With all the galas and benefits going on these days, you’d think somebody would come up with some kind of Calendar of Events so they don’t all collide on the same bloody night—but, no! Just grab your checkbooks and crash helmets, and place your money where your heart is. . . . Exhibit A—Monday, Nov. 11: York Theater Company, which has been in the music-making business for 50 years (James Morgan, Chief Executive Emperor), is passing its 28th Annual Oscar Hammerstein Award for Lifetime Achievement in Musical Theater along to Hadestown’s high-stepping storyteller, Hermes (Andre De Shields, that new Tony-winner-in-town, who’s been in the music-making business for 50 years himself!) . . . The Broadway past he’s accumulated should be flashing in front of his eyes in musical numbers from Hair, The Wiz, Ain’t Misbehavin’ and The Full Money, all delivered by The Alumni Ensemble of The Boys and Girls Choir of Harlem. Co-stars and co-workers from these shows will parade by as well at The Edison Ballroom. Hosting the gala is Charlayne Woodard, who heads the Ain’t Misbehavin’ contingent (Ron Lucas, Dawn Driver, Tony Perry and Malvinna Rose). From The Full Monty, there’s Patrick Wilson, John Ellison Conlee and songsmith David Yazbek, and from The Wiz are Mercedes Ellington, Darius De Haas and Larry Owens. Representing Hair all by himself is Ben Vereen. De Shields won’t be the lone honoree: producer Riki Kane Larimer will receive York’s Founders Award, and she’s bringing along her Cagney crew: Robert Creighton, Jeffry Denman, Melissa Schott, Edward Tolve and Jessica Wockenfuss (I tried to get her to change her name). . . . Meanwhile, in another part of the forest—The Kaye Playhouse on the Upper East Side—Miss Daisy is being taken for a ride by her chauffeur. The Acting Company corralled the Off-Broadway originals (Dana Ivey, Morgan Freeman and Walter Bobbie) of Alfred Uhry’s Pulitzer Prize-winning Driving Miss Daisy and got them to take it from the top again for a one-night-only benefit. . . . Something old, something new: Down in the Village at The Lucille Lortel Theater, Abingdon Theater Company is hoisting the curtain on its 27th season with a one-night-only special event: a stage reading of Robin & Me: My Little Spark of Madness, a new solo show written and performed by Dave Droxler about a little boy whose imaginary friend is Robin Williams. Yes, it’s autobiographical. . . . On top of everything else—and you can be pardoned for not noticing—Nov. 11 is Veteran’s Day. To commemorate the date and to benefit the Vietnam Veterans of America, director Will Nunziata has put together a 90-minute one-act concert version of Over Here! by The Sherman Brothers (Richard M. and Robert B.) of Mary Poppins fame—a tuner about a train trek from L.A. to NYC during WW II, peopled with soldiers, civilians, cabaret singers and at least one Nazi spy. It opened at the Shubert Theater with two-thirds of The Andrews Sisters (Patty and Maxene) and a host of young hopefuls who made good (Ann Reinking, John Travolta, Marilu Henner, Treat Williams and Samuel E. Wright), ran 341 performances and became 1974’s top-grossing Broadway show. It closed four days into 1975 over a salary dispute (the producers vs. the sisters) that scuttled the national tour. This will be its first reappearance in 45 years. Tony winner Debbie Gravitte heads another cast of young hopefuls (Haley Swindal, Jessica Hendy, Nikka Graff, Mark William, Dani Apple and Isaac Phaman Reynolds). . . . Grand Hotel, the 1932 Oscar winner with Garbo, Crawford, Beery and The Brothers Barrymore, was turned into two musicals—At the Grand in 1958 by Robert Wright and George Forrest, and Grand Hotel in 1989 with additional music by Maury Yeston—and so it seems proper that the 30th anniversary edition would have a double blast of concerts (at 7 and 9:30) in The Yotel’s Green Fig Restaurant at 42nd and Tenth. Walter Willison, one of nine original cast members rounded up, is Colonel-Doctor Ottenschlag and the show’s director (he’s keeping under wraps the contributions of Sachi Parker and two-time Tony winner Judy Kaye). Also participating: Karen Akers, Timothy Jerome, John Schneider and Ken Jennings. This version resembles the movie more than At the Grand, which switched the setting from 1928 Berlin to Roma of la dolce vita vintage and turned Garbo’s ballerina into a Callas-caliber opera star to accommodate the wife (Joan Diener) of the director (Albert Marre). The show’s calling-card, Paul Muni, abruptly bailed after promising tryouts in L.A. and Frisco and wouldn’t take it to Broadway, incurring the hatred of the whole company. Ken Mandelbaum’s Not Since Carrie tells how Muni, super-shy and embarrassed by cleavage, was jolted at his last curtain call by Diener, who turned upstage to him, flung open her full-length mink coat, revealing herself nude–save for a long-stemmed rose between her legs. 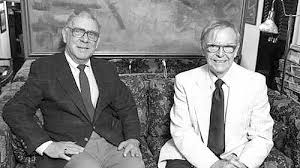 Robert Wright and George Forrest: something sort of Grandish

SAME TIME, NEXT MONDAY: Exhibit B—Monday, Nov. 18—is a battle royale for your entertainment dollar by two of the grandest of dames. One is a literal dame: Dame Angela Brigid Lansbury DBE, 94; the other is the more colloquial variety: Linda Lavin, 82. Both stars are coming out of quasi-retirement—La Lavin from Los Angeles, La Lansbury from West 58th Street—to lend their considerable twinkle to their one-night-only benefit readings. . . . “It was all Linda’s idea–she’s the force behind the entire event,” insists Charles Busch, the author of The Tale of the Allergist’s Wife and now, suddenly, its designated title player. “She phoned me and said she wanted to do a big event for The Actors Fund and thought it would be great to do a 20th anniversary of our play. Linda looks so wonderful these days I said, ‘Oh, I’d love to see you play that role again.’ She replied, ‘No, I think you should play Marjorie, and I’ll play the mother.’” (No fool Lavin. The role was license-to-kill for the late Shirl Bernheim, who made a memorable Broadway debut with it at the age of 79.) “She said she’d contact the rest of the cast—Michele Lee, Tony Roberts and Anil Kumar, and she did, and they all said yes. Then she got Lynne Meadow, the original director, involved and arranged for us to use Manhattan Theater Club’s Friedman Theater. It all began with Linda.” Now that the gauntlet has been thrown down, Busch finds himself surprisingly reluctant to pick it up. “I never saw Marjorie as a role I wanted to play,” the gender illusionist admits. “I really wanted to write a big female role that actresses would love to play, and a whole series of interesting ladies have–Valerie Harper and Rhea Perlman on Broadway and, in regional theaters, Marsha Mason, Paula Prentiss, Robin Strasser and Karen Black. Now, me.” He’s the first male to try it on. . . . To give heft and structure to what is basically a comedy, Busch once told me that his template for it was a super-serious Harold Pinter triangle, Old Times, which Mason brought to New York with Anthony Hopkins and Jane Alexander. . . . Never one to shy away from age-appropriate roles (Madame Arcati, Madame Armfeldt, Miss Daisy Werthan and a gallery of role-readings), it was inevitable that Lansbury would eventually get around to the intimidating proper Lady Bracknell in Oscar Wilde’s “trivial comedy about serious people,” The Importance of Being Earnest. You can hear the ‘’HANDBAG!” from here. Roundabout, whose benefit it is, has encircled the star with a classy cast: Hamish Linklater (John Worthing), Lily Rabe (Gwendolen Fairfax), Annaleigh Ashford (Cecily Cardew), John Glover (Rev. Canon Chasuble), Jayne Houdyshell (Miss Prism), Simon Jones (Merriman), Daniel Davis (Lane) and Thom Rhoads (Algernon Moncrieff). Michael Wilson directs at the American Airlines Theater. 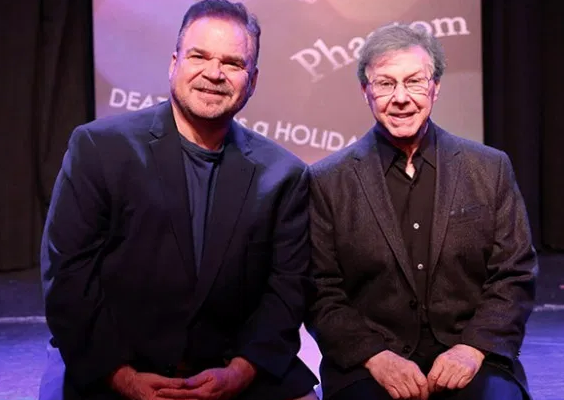 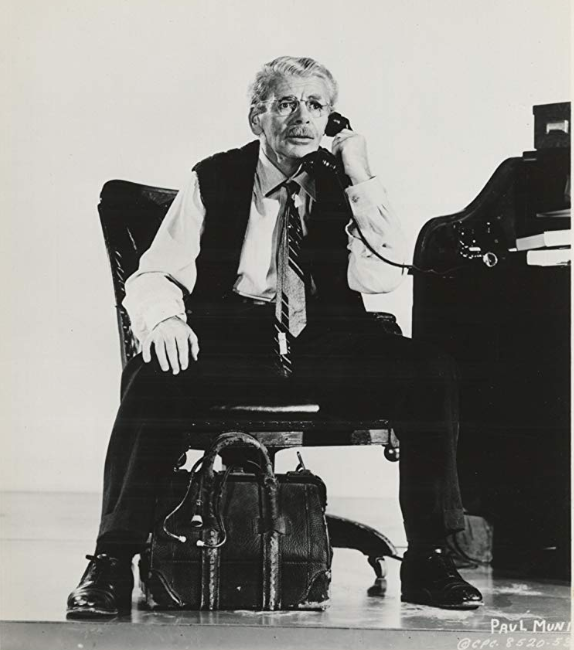 MORE ON MAURY AND MUNI: Despite the three decades that separate them, the friendly fusion of scores from At the Grand and Grand Hotel turned out to be a pretty evensy-stevensy affair and congealed surprisingly well–hence, Tonys for all three songwriters. A couple of Wright-Forrest ditties done for the 1989 version but subsequently cut will be included in the concerts, according to director Willison. . . . Some of Yeston’s numbers from this show will be tumbling onto a stage again—along with some from his Death Takes a Holiday, Titanic and Nine–when Gerard Alessandrini gives The Yeston Songbook a thorough shaking Nov. 26-Dec. 29 at the York Theater. This mad mind behind Forbidden Broadway has conceived and will direct an entertainment called Anything Can Happen in the Theater: The Songs of Maury Yeston. . . . Muni never set foot on a stage after his final curtain call in At the Grand. There were two schools of thought about his emphatic exit. The company line was that he was too ill to continue. Gossip had it that this “illness” was galloping paranoia: he believed Diener and her director-hubby were conspiring against him, and it kept him awake at nights. . . . Whatever, Muni bounded back in a more comfortable medium. He signed up to do what would be his last movie—The Last Angry Man—and he arrogantly had it written into his contract that he would be given a bonus if his performance got an Oscar nomination. Guess what? He collected.