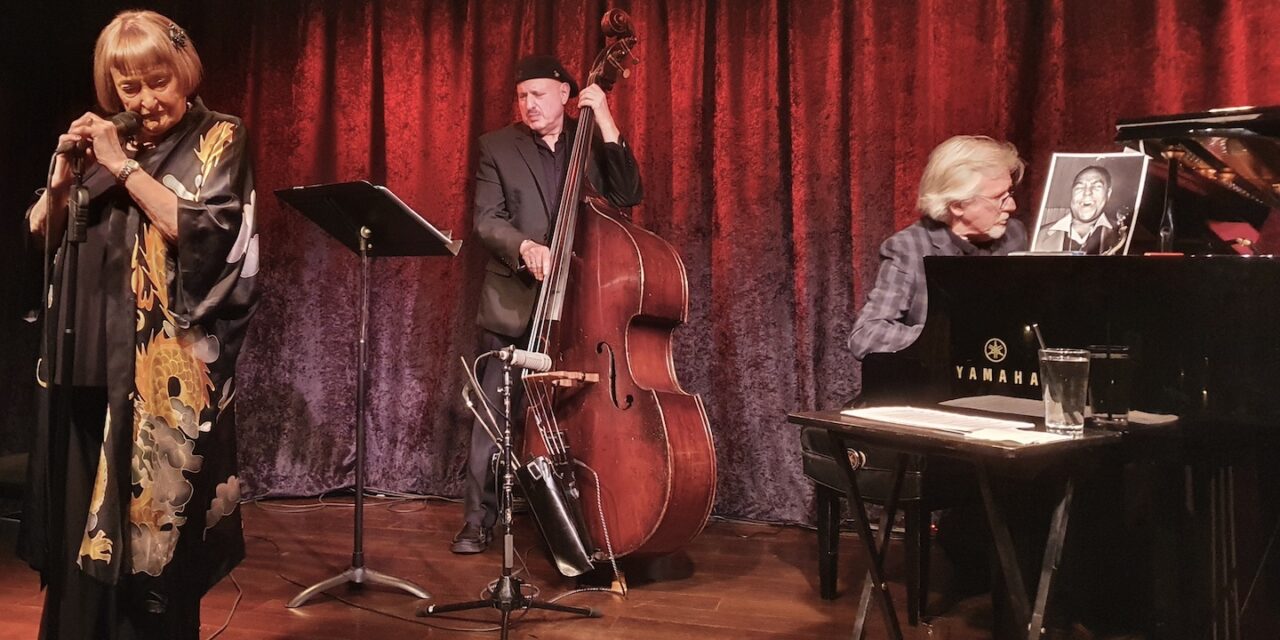 There cannot be more than a handful of jazz performers alive and still active today who played at the original Birdland, which closed in 1965.  Fewer still are the performers who knew and played with Charlie Parker, the “Bird” Birdland was named after and who died in March 1955.  Sheila Jordan, at Birdland Theater on her actual 93rd birthday, is the president emeritus of that elite group.  For her birthday show, she sang primarily songs written by or about Charlie Parker.

Ms. Jordan moved to New York in 1951 because of Charlie Parker. “I guess I was chasin’ the Bird,” she said in a 2012 interview. As early as the 1940s, she was the “Jean” of the vocal group “Skeeter, Mitch and Jean,” which put lyrics to Parker’s music, and he often had them sing with him when they were in her native city of Detroit.  With a photo of Parker in a prominent position on the piano, Ms. Jordan referenced him numerous times in her 12-song set at the Birdland Theater, and sang several songs about him.

Ms. Jordan appears younger than her years, and sang nearly all of her songs standing at the mic, or with the mic in hand, only occasionally sitting during the solos by her musicians.  While her voice may not be as supple as it once was, it is strong enough, and her instincts are on the money.

Backed by two renowned musicians, pianist Alan Broadbent and bassist Harvie S, Ms. Jordan started her set with “Humdrum Blues” (Oscar Brown, Jr.), and she wasted no time in showing off the skills that have made her a jazz legend.  If you have ever seen a bebop jazz singer scatting with just a bass player, this style was pioneered by Sheila Jordan.

“I hope I remember these lyrics. I just wrote them,” she said to laughter, before singing new autobiographical vocalese lyrics she wrote for Charlie Parker’s instrumental “Relaxing at Camarillo.” “I loved Charlie Parker so much, I married his pianist, Duke Jordan,” she sang.  Through the lyrics, we learned that she first heard this song sung by Byrd himself “in 1950 or 1951 at Birdland.”  She followed this with another love letter to Parker, “Bird Alone” (Stan Gatz/Abbey Lincoln).    She told a great story of attempting to go to Birdland one night with Parker, who was very casually dressed in a tee-shirt, and being told to “go home and dress up.”  Parker exclaimed, “They name a club after me and I can’t even get in!”

“Sheila’s Blues” was another biographical song.  She even included her birthdate in the lyrics (November 18, 1928).  Her vocalese-style lyrics (free-flowing lyrics following the style of an instrumental jazz solo, of the type sung by Annie Ross, Jon Hendricks and King Pleasure) told the story of her early life, and her trials and tribulations.  This brings to mind Susie Mosher, who improvises songs about her life every Tuesday at Birdland, though she’s not at all a jazz singer.  “If it wasn’t for jazz music, I wouldn’t be alive,” Ms. Jordan sang.

Bassist Harvie S is an exceptionally melodic player, and his facial expressions while playing are fascinating to watch.  Alan Broadbent sometimes plays in a George Shearing-esque style, and the duo was given an unnamed solo in mid-show.

Ms. Jordan’s daughter, Tracey Jordan, surprised the singer with a birthday cake during the show on November 18th.  The audience sang happy birthday, and some of us were gifted a piece of the delicious red velvet cake.

The final song was a jazzy ballad of “Look for the Silver Lining” (Jerome Kern/Buddy De Sylva), a song eight years older than Sheila Jordan, and was sung as a message of hope for the future.

Sheila Jordan has an additional appearance on November 20 at Birdland Theater.