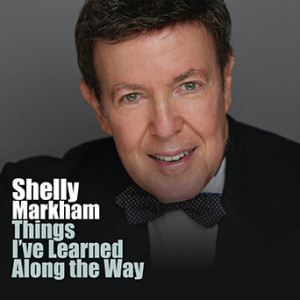 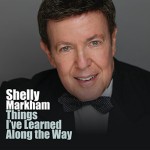 Most of the cabaret and theatre community know Shelly Markham as the music director for Andrea Marcovicci in her acclaimed cabaret acts each year.  Some of us may know at least two of his songs, “It’s About Time,” which won the 2013 MAC Award for Best Song, and “The Sweetest of Nights and the Finest of Days,” introduced by Marcovicci and sung by many pop singers.  Unknown to most of us, Markham has had a very successful career as a composer of original shows, several of them children’s shows that have been performed all across the United States.  One of them “Alexander and the Terrible, Horrible, No Good, Very Bad Day” (lyrics by the poet Judith Viorst) was originally commissioned by The Kennedy Center.

To celebrate his newly issued CD “Things I’ve Learned Along the Way” Shelly Markham, touring with Marcovicci on her birthday show, chose Don’t Tell Mama Wednesday, November 20, as the perfect venue.  Supported by Jack Cavari on guitar (Markham met him when he was music director for the off Broadway hit “Your Own Thing”) and Jared Egan on bass, Markham was obviously thrilled to be telling his story and the back story on each of his compositions.  Lyrics for his compositions were Jamie De Roy, Barry Kleinbort, Mark Winkler, Annette Leisten (whom he met in his first BMI workshop) Lee Adams, Tom Toce, and Paul Rolnick, Karen Mason’s country western songwriting husband.

Lured to California by Bonnie Franklin (who also introduced him to Voist) he has had a thriving career conducting and arranging for such stars as Lainie Kazan, Nell Carter, Michael Feinstein, Elaine Stritch, Margaret Whiting, and, of course, Marcovicci.  Markham has received multiple ASCAP and BMI recognitions, a Bistro Award, and two MAC Awards.  What is a revelation in this act, which was more like a party than an act, is that Markham has a powerful singing voice, one that is usually heard in duets or as back up for Marcovicci.  His vocal performances on each selection were strong and stellar.  Some of the very special performances were his rendition of “Come Looking For Me,” matched up with Adams’ “Once Upon A Time,” Toce’s “You Make Me Laugh,” and “Amour” (sung by Marcovicci,) and four songs with lyrics by Viorst (“Money,” “Together,” (a song about a dinosaur and a child), “If We Stopped Trying” and the aforementioned “Sweetest of Nights” which Marcovicci sang.  Every one was a winner and I urge singers out there to get this CD and add some treasures to their repertoire!

I’m going to make a special note of the two Rolnick songs.  Markham has known Mason for a long time and he met Rolnick when she married him.  Talking about how often their marriage was a long distance one (with Mason traveling and Rolnick in Nashville) and knowing them both very well, Markham took a phrase from what Rolnick said about his wife and wrote “Where Would I Be” which is wonderfully about how much they want to be together when they are apart.  I think everyone knows “It’s About Time,” which was written for two gay friends’ wedding, and has been celebrated everywhere.  Markham even announced that the Chicago Gay Men’s Chorus has done a symphonic arrangement about the song!  Mason, at liberty from the collapse of “Rebecca” has suddenly found herself in demand at gay weddings with that song.  Markham’s performance brought cheers from the music savvy audience.

Oh yes, there was one selection that was not written by Markham but is included on the CD.  Friendship with Marilyn and Alan Bergman and Marvin Hamlisch gave him access to a set of lyrics to “The Way We Were” that Barbra Streisand did not want to sing.  They were a second bridge that went:
Ev’ry day was like a gift of flowers
Ribbon wrapped
And waiting to be seen
Eagerly we opened all the hours
Then what happened
Happened.

And Shelly Markham’s performance of that award winning song re-invents it in a spectacular way.  It’s only a great bonus on the CD because every song is a gem.  And I wish there were a recording of Markham’s stories behind the songs.  In the meantime Markham and Marcovicci are touring (they will be at the new Rrazz Room in New Hope this weekend.)  But get that CD on LMLmusic.com or ShellyMarkham.com