Our Sinatra “A Musical Celebration” 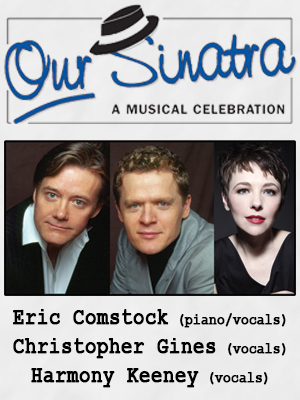 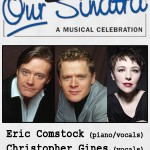 Longevity is a rare commodity in our fast-paced modern world. The Blue Angel nightclub is gone. So is The Reprise Room and the Algonquin Hotel’s fabled Oak Room. These three clubs all hosted Our Sinatra, which has robustly outlived them all. This current outing at Birdland is a “reunion” of the show that pays homage to Frank Sinatra – actor, singer, celebrity and generally larger-than-life human being – an icon whose name is next to “longevity” in the dictionary. Our Sinatra is a solid show with the potential to be around as long as it wants to. Originally conceived, written and performed by Eric Comstock, Christopher Gines and Hilary Kole, this outing has the two gentleman in place with the addition of Harmony Keeney in place of Ms. Kole.

Comstock, on piano and vocals and Gines, a vocalist cut from the Sinatra cloth (a compliment) have weathered well in the fifteen years since the show debuted in December 1999. Both have had the opportunity to grow as artists; their maturity adds a certain gravitas to the music of “Old Blue Eyes.” Comstock is a consummate “saloon singer” (also a compliment) in the tradition of Bobby Short, Steve Ross, and the late Hugh Shannon. He’s a pro at tickling the ivories and laying down a tune, even if the voice lags slightly behind in excellence. His renditions of “Too Marvelous for Words,” “Everything Happens to Me,” and “All the Way” are perfect vehicles for his talent.

Comstock is also a singer’s pianist: sensitive and accommodating to the singing styles of his two stage partners. Christopher Gines has a rich baritone and smooth delivery. If he chose to (with the natural look of a 40s crooner) he could be a Sinatra imitator. Thankfully, he interprets the work through the lens of his own strengths. His “I Fall In Love Too Easily” and “For Once In My Life” were sung with effortless style, trumped only by “Old Man River,” an iconic tune that’s bound to invite as much scrutiny as Hamlet’s “to be or not to be” monologue. Gine’s interpretation was clean and straight-ahead, earning him “bravos” from an appreciative audience.

Harmony Keeney, the third leg of the Sinatra triangle is a strong singer, and also a young singer. She has a clear, bright voice and a sweetness that’s sometimes at odds with the intrinsic nature of a Sinatra tribute (the Chairman was a Jersey boy, after all – Hoboken no less). Surprisingly, Keeney excelled on the “heartbreak” number, “I’m A Fool To Want You,” showing a depth of emotion beyond her tender years. Her takes on “The Second Time Around,” and “I’ve Got the World on a String” show the promise of great things to come; maturity and experience should give her a boost toward a more vigorous stage presence.

Frank Sinatra’s career was huge: he seemed to have recorded every song ever written (actually the number is 1,500, along with 58 motion pictures filmed). Choosing which songs to present is no small task, open to complaint from those who didn’t get to hear their favorite Sinatra song. But the choices are smart and the text that goes along with the production likewise (the “problem” is addressed with straight-on honesty). Of course, each of the three relate how they came to love Frank’s music, and they top it off with “the monster of medleys,” a 26-song tribute smoothly integrated and sung. Providing remarkably unobtrusive bass playing was Boots Malison, who seemed quite content to provide excellent time-keeping in the background.

The flaw in this “reunion” of Our Sinatra wasn’t the pared down time, or lack of costume changes and other accouterment. It lies in the time slot. Six o’clock in the evening seems counterintuitive to the man who made night-life glamorous. The great cavern of Birdland was barely half full, giving the room the aura of a train station in the wee hours. Yet, those who were present made up for a lack of numbers with audible appreciation. One could imagine Frank himself in the back of the room, pork pie hat tipped ever so slightly, cigarette dangling, whispering, “let’s just say that the place isn’t important, as long as everybody has a good time.”

Our Sinatra was originally conceived and created by  Eric Comstock, Christopher Gines, and Hilary Kole. The current production is produced by Jack Lewin, directed by Kurt Stamm with general management  by Ellen Rusconi. The entire production is supervised by Richard Maltby, Jr.