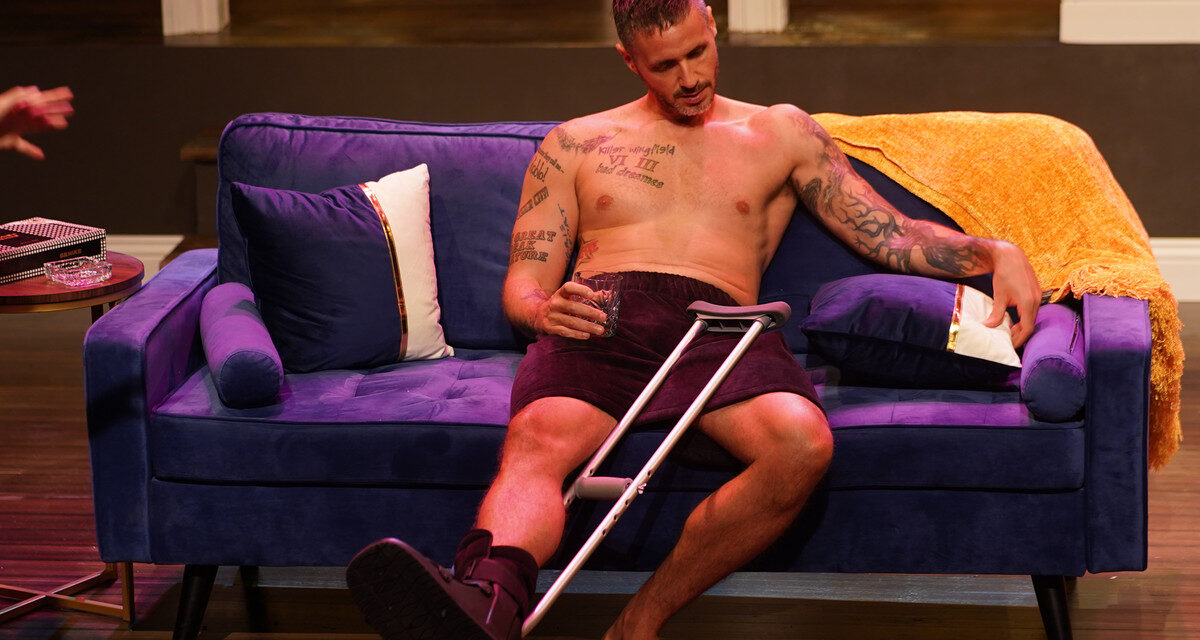 Matt de Rogatis is currently starring at Theatre at St. Clements in a newly imagined version of Tennessee Williams’ Cat on A Hot Tin Roof, in his dream role as Brick. He’s an actor, director, producer with credits such as Hemingway and Me, Inference and Killer Fitness. He’s also into wrestling, working on his Masters in psychology and responsible for forming the non-profit theater organization, Ruth Stage.

Theater Pizzazz’ Yani Perez had some questions for Matt.

The show was postponed a few times – what are your thoughts about seeing the production finally on stage?

Well when it keeps getting delayed you start to think it’s never going to happen. I mean, imagine making a date with someone and every time you do this person cancels and reschedules and does it 4 and 5 times. Eventually you start to think that even though you made plans again, you just KNOW it’s not gonna happen. That’s where I was at for the longest time with this show. I just wasn’t convinced it would take place. I even started to question if I had the correct license to produce the show. “Is it really in New York City they are allowing us to do this?” But as we got closer and closer and I began to realize it WAS going to happen and the whole production took on this sort of supernatural feel to it. The first preview was surreal. But we have all settled in nicely. And I’m really proud of what we have already accomplished in a week of performances. It may have taken us years to have reached this point but it was worth it.

How did you prepare to play the role of Brick?

I am getting a masters degree in psychology and so I always approach my characters from a psychological aspect. I’ll “diagnose” them and then start to dive into what they are going through, the symptoms, how they may respond to certain situations, are there personality disorders involved? Etc. I’ll also do the same with the characters around them in the play. Cat on a Hot Tin Roof is filled with such richly dysfunctional people that it’s made for such an interesting psychological approach. In fact, my teachers have even let me do my final thesis papers on Brick and other characters in the play. It’s been great fun psychoanalyzing Brick. There’s so much going on with him. It’s an exhausting role to play both physically and emotionally and I literally feel beat up every night and sore. I hobble around on a crutch and take about 4 falls every night. Plus there’s this whole tortured emotional element to him too. I think Brick is the best male character Tennessee Williams ever wrote for an actor. Brick is more tortured and conflicted than Tom (The Glass Menagerie) and Stanley (Streetcar) and so I think that makes him the more interesting role. Again, it’s been great fun looking at his family dynamic, his relationships to his wife and best friend and all the things that make him who he is. In my opinion there is SO MUCH more going on with him than the whispers of his sexuality and I have always felt that people who say “Brick drinks because he is gay” don’t quite understand the character. That is a lazy way of looking at him. There’s so much more brooding beneath the surface with this man. His sexuality being called into question is just a slice of the pie.

You have a great cast – What are the highlights of working with them?

I’m not sure I can really pinpoint any one particular highlight. The character of Brick mostly interacts with the characters of Maggie and Big Daddy. Working with Christian (Big Daddy) has been a thrill ride every night and I have to say, Sonoya (Maggie), is about as disciplined and professional an actress that I have ever been around. It’s a joy to go out on stage with the both of them every night and see the changes with each performance. Especially Sonoya. She has come such a long way. And it’s not that she wasn’t ever good or anything like that but she is getting scary good now with the passing of each show. She’s a special talent and people are going to notice this.

What has been one or some of your favorite moments from this production?

Meeting and working with Christian Jules Le Blanc and Alison Fraser have been really great for me. They are both such talented artists and I’ve developed my own unique relationship with each one of them. I 100% plan to work with them again in future productions we are planning. Then of course, just the process. Living for 2.5 years with this character and this play and all that work that was put in by myself, Spencer Scott and Joe Rosario to raise the money and make the production the triumph that it is. For sure, working with those two guys, especially Joe, has been a highlight. I am in debt to him for his services and all the amazing work he has put in as a director and behind the scenes as well, giving our group and the show the TLC that it needed to be what it is today.

What can audiences expect from this production?

A new play. That’s what we hope to achieve. By modernizing the production and going non traditional with casting we hope to open audiences to a brand new interpretation of this iconic piece. We want them to feel like they are walking out of the theatre as if they have just seen a brand new play and not a reboot of a classic. I do think we are achieving that.

Come see the show. It’s the first time the Tennessee Williams estate has allowed this great show to be produced Off Broadway and we are in deep gratitude towards them for this. Come experience this unique interpretation and a stellar cast. I promise you will get your money’s worth. From Billboards in Times Square to TV spots, bus shelter advertising and so much more, we have spared no expense to make this show everything that it deserves to be. The set created by Matt Imhoff is HOT! Tin Roof hot!

RUTHSTAGE.ORG/CAT is where you can get the tickets and we are running at the Theater at St. Clement’s (423 W. 46 St. NYC) until August the 14th.