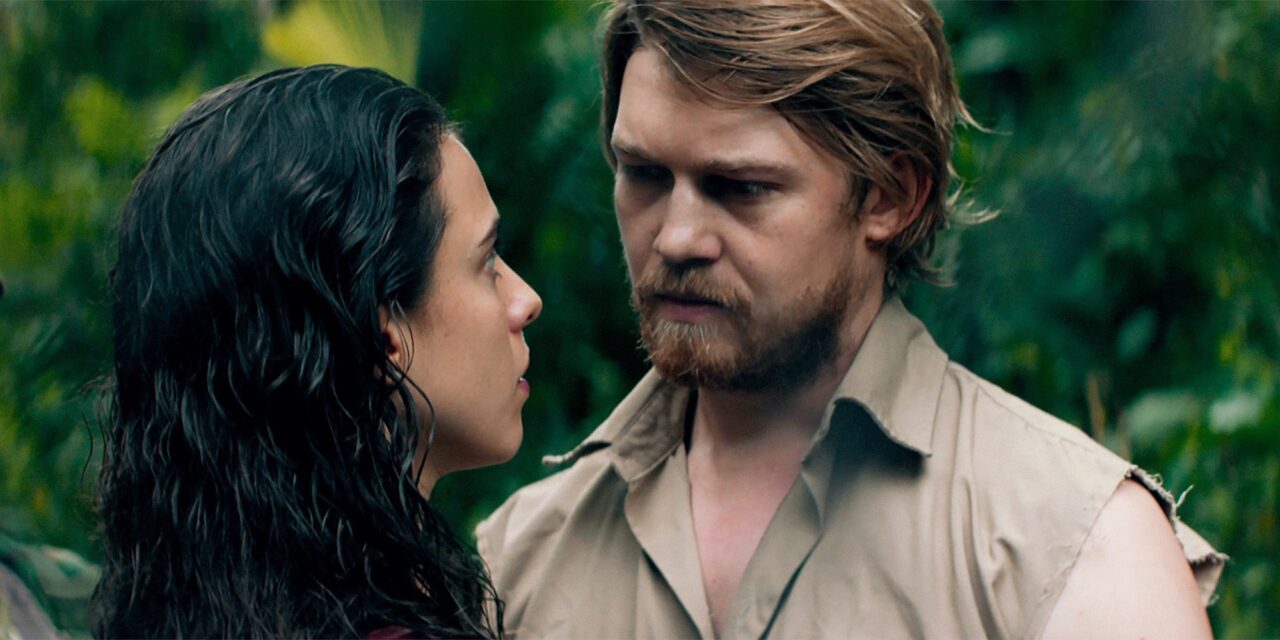 Denis adapted and updated the 1986 novel by Denis Johnson, The Stars at Noon, lightly truncating the title to keep its meaning: players’ covert adventures happen in the light of day, and corruption happens in plain sight. No one has the courage or will to stop it, so there is no need to hide. Everyone understands how corporate representatives and spies play the game for money and power. However, when power players compete with each other and put each other’s lives at risk, then hiding and running become the most dangerous game to play.

Denis contemporizes the film’s setting to a politically unstable Central American country which could be Nicaragua, though the time and specifics are conveniently opaque. The characters wear masks that sometimes dangle without functionality on ears. However, the pandemic is not fully integrated into the film and seems inconsequential. The seedy, run-down, fleabag hotel where journalist Trish stays could be out of the novel’s rural setting, 1980s Nicaragua during the war. In wealthier sections of the city, businessmen and their assistants sport cell phones, stay in luxury hotels and drive new cars. The modern and the 1980s coexist in this third world country on the brink of an election. Military in fatigues with AK-47s at the ready are everywhere.

Denis identifies an explosion of economic contrasts that fuel the political intrigue and corporate interests vying for power. The impoverished segment of the population live in the past. They have not progressed economically because remnants of corporate colonialism and wealthy foreign influence manipulate the government against equity for the lower and middle classes. The ruling segment of the population lives in luxury, exploits the country’s resources and makes sure their puppets are in power. The admixture of poverty and wealth, rural countryside and city, pre-digital technology (rotary phones) and mobile phones, is an aspect which Denis employs to explore and emphasize the themes and advance the plot.

The action takes off after Denis introduces us to the compromised Trish, an American journalist (Margaret Qualley), desperate to get back to the U.S.. Trish faces complications with the authorities who are looking for her and local cops who exploit her vulnerability and blackmail her for sexual favors. To add to her grief, her boss at the U.S. media outfit that once funded her, cuts off her salary then fires her. After exhausting every resource, she is at her wits end until she meets an English businessman (Joe Alwyn). He has money, ties to the oil industry and is on a mysterious assignment.

Despite their intentions, Trish and Daniel fall for each other and theirs is a whirlwind romance of contrast and compatibility. Trish helps Daniel negotiate the dangerous forces that attempt to close in on both of them with her knowledge of the country and language. For his part Daniel offers sustenance and emotional support as they elude the authorities and his corporate rivals and attempt to find a safe passage out of the country without fanfare.

Their journey takes them through a series of surprising twists and turns through backwater tropical terrain as they enjoy the thrill of the chase and periodic languid, steamy togetherness in the quiet moments of temporary safety at her squalid hotel. And then their journey is halted and they are forced to make untenable decisions.

Qualley is authentic as the quixotic, emotionally uncommitted Trish, whose live-wire, scatterbrain act hides a sharp acumen and keenly intuitive survival skills that prevent their capture. On the other hand, Alwyn’s Daniel is the sullen, laconic, low-key Brit who becomes lost, navigating the political unfamiliarity of the country. His lack of confidence in corporate gamesmanship and mistaken judgments get them both intp trouble. When they are separated, while pursuing their own goals, then find each other again, having dodged “the enemy,” their affection for each other is palpable.

Denis varies the torpid mood with the hot tempo of excitement as Trish’s and Daniel’s escapades turn into dead ends and raise the stakes higher. The filmmaker alternates the adventure with the couple’s slow, romantic duel of intimacy, whose resolution she keeps in abeyance until the film’s conclusion.

With Eric Gautier’s cinematography and a soundtrack from Denis’ pals The Tindersticks, we remain engaged throughout. Memorable for their beauty and the sparks Qualley and Alwyn ignite against the backdrop of the lush, visually appealing environs, Stars at Noon is worthy of its award at Cannes.

For tickets go to the NYFF60 website: www.filmlinc.org/nyff2022/ An A24 release—look for it streaming online and playing in theaters beginning October 14.