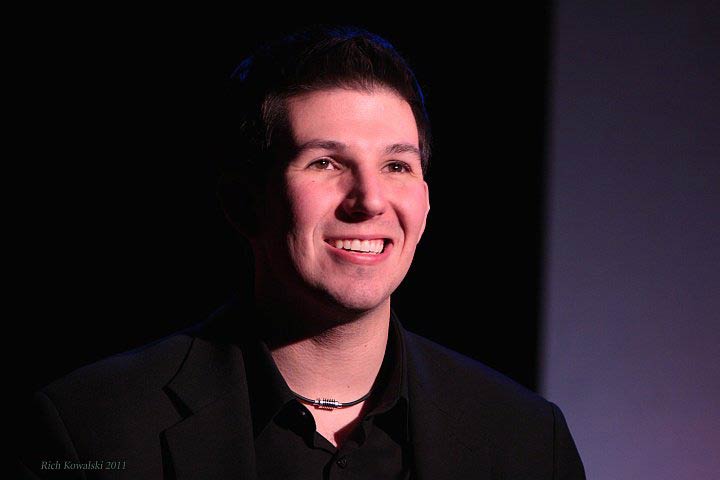 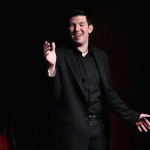 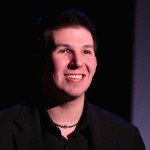 When patrons entered the Duplex for “Stearns Matthews: Spark,” on November 1st, a big red ribbon was strung across the stage. When Matthews appeared behind that ribbon, he grabbed giant scissors and with a big gesture, sliced that ribbon and sang a gorgeous version of Stephen Schwartz’ “The Spark of Creation,” from The Children of Eden. His pianist/music director was super talented Christopher Denny and this show was directed by Lennie Watts. “Spark” was produced and mixed by Paul Rolnick and Matthews gave him full credit for making the CD sound so great.

There followed a series of wonderful songs, all given Matthews’ special interpretation of the lyrics, some of them with surprisingly slow tempos which gave those lyrics special meaning including a very slow “Raindrops Keep Fallin’ On My Head,” “Right as the Rain,“ and “My Romance.” Ever since his amazing debut show six years ago at age 19, Matthews has had extraordinary awareness of the meaning of lyrics and his articulation is perfection.

Some of the other selections were eclectic versions including a very funny multi-lingual version of “Stop! In the Name of Love,” sung in German, Italian, French, Spanish, and what I think was Pig-Latin! There was a beautiful version of “Drift Away,“ a “throwaway” song from “Grey Gardens” originally sung by Bob Stillman in the first act.

When he decided he needed additional orchestration on his slow version of “I Can’t Stop Lovin’ You,” he engaged “Toots” Matthews (another persona) to enhance that song with the melodica! It was stunning with Denny doing all the other instruments and vocal backup!

There was a song that Matthews and Denny had selected years ago but had never put in any of their past acts. At the recording session, there was suddenly a time gap and Matthews and Denny recorded in one take -the spectacular Kander and Ebb “My Own Space,” a forgotten song from The Act.

All of Matthews’ comic talent was evident in a hilariously funny “Every Time A Friend Succeeds (A Little of Me Dies Inside)” by Amanda Green. To encourage the audience to sing-along, Matthews brought out huge placards with the lyrics to the repeated chorus! There was also the never-before-recorded sweet tongue twisting “My Alligator and Me” by John Bucchino.

One heart-breaking and funny song Matthews sang was not on the CD. It was Ed Kleban’s “Paris Through the Window” about three 18 year olds driving from Brussels to Paris, entering that famous city through all the garbage dumps, and what happened to them later in life. Matthews was the one who remembered forever seeing Paris through the window very early in the morning.

To close out the act, Matthews sang Missy Higgins “Steer” and Joe Raposo’s “Sing,” which he has in every act. “Spark” is not to be missed!

“Stearns Matthews: Spark” repeats at the Duplex, 61 Christopher Street – Saturday, December 6 at 4:30 PM. For reservations: www.theduplex.com or (212) 255-5438. For further information about the CD go to www.stearnsmatthews.com